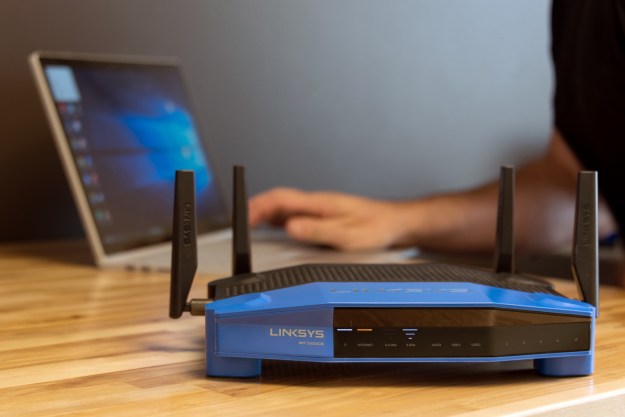 In 2002, Linksys rolled out the original WRT54G, a seemingly humble router. It set the standard for ease of use and router versatility, while also offering strong performance. It also opened a new world to tinkerers and enthusiasts, who found loading custom software on the device unlocked its possibilities.

Linksys has continued to embrace that crowd by allowing the installation of, or including, the popular DD-WRT software on WRT routers for some time. The $250 WRT3200ACM isn’t a huge leap forward, but it does provide even higher bandwidth while preserving the customization that made this series great.

The newer WRT routers are clearly descended from the recognizable originals, with a modern look that adopts the more jagged edges and dramatic design that we’re growing more used to seeing. That’s not to say it’s gaudy. In fact, the WRT is one of the more attractive routers available.

And the WRT3200ACM is sturdy as ever, with no panel gaps or construction oddities to note.  Not that its competitors have those issues — if you’re spending a couple hundred bucks on a router, chances are it’s built of thick plastic and sturdy antennas.

There’s plenty of connection both wired and wireless on the WRT3200ACM, even among other high-end routers. There are four Gigabit LAN ports, plus Gigabit WAN, and a pair of USB ports, one equipped with 3.0, the other a 2.0 with eSATA. This should cover most user’s network storage needs.

The WRT3200ACM is also fitted with the latest in wireless technology, including 2.6Gbps of 802.11ac, and 600Mbps of 802.11n. Although that total falls short of the top routers we’ve spent time with, it’s well within range of other routers at its price point.

If you’re spending this much on a router, you need to know it packs in the latest tech, and the Linksys doesn’t disappoint. It supports the 2.4GHz and 5GHz bands simultaneously, as well as MU-MIMO for networks with a lot of devices. The internal processing is powered by a dual-core 1.8GHz processor, which is great if you use the WRT with a storage solution.

The Linksys takes the cake when it comes to software.

While you can find similar bandwidth and coverage in a number of high-end routers, the Linksys takes the cake when it comes to software. The WRT3200ACM comes out of the box with a simple, straightforward setup and customization suite. We’ve seen routers like Google’s OnHub take the method of asking yes or no questions, and avoiding technical terms in favor of descriptive language, and Linksys uses that to great effect here.

If you stick with Linksys’ built-in software, you’ll also have the luxury of controlling your router from the smartphone app. It’s most useful for parents monitoring kids’ usage, but it’s a nice add-in if you need to make quick changes or approve a new machine.

One of the reasons the WRT line has been so successful in the past is solid support for advanced software. DD-WRT has long been an option for tinkerers looking to erk more performance and better control out of their network. It takes a bit of work, and can even brick some routers, but the software was designed with the WRT54G in mind. Linksys has returned the favor by keeping the WRT hardware open to such changes.

If you’re willing to put in the effort to install it, DD-WRT can unlock a larger feature set for your router. The most common use case is setting up a second router to act as an access point or signal extender, which often isn’t possible with stock firmware. It can also allow the router to act as a print server or network attached storage, with frequent updates and a wider troubleshooting community than you might find for your specific router.

If the WRT is your only router, there’s little reason to install DD-WRT right away. The built-in software will be able to handle most simple network use cases, including MAC address management and whitelisting, security options, and DNS settings. If there are multiple routers from different manufacturers in your network, DD-WRT may help them communicate more consistently.

Installing DD-WRT is a breeze on this router. And if something does go wrong during installation, the WRT3200ACM is equipped with backup firmware that you can flash back to from within DD-WRT. Doing so will roll you back to the stock software suite, so you can try again without having to worry about bricking your nice new router. This makes it (almost) impossible to screw up the installation, banishing an obstacle that scares many people away from trying DD-WRT.

Our reviewer’s house serves as a grueling test gauntlet for even the most hardened routers. The five-bedroom home spans three stories, with five people and as many as ten devices streaming media and playing games.

Latency was low, and packet drops few and far between.

Under stress, the WRT3200ACM handled itself with aplomb. Even with multiple instances of Netflix and Plex running in the house, the gaming machine in the far corner upstairs never saw any inconsistencies, latency was low, and packet drops few and far between.

The one spot the Linksys couldn’t reach was in the basement, directly underneath it. To be fair, this is a spot that most routers have trouble providing signal to. Still, both a Playstation 4 and Alienware Alpha experienced sporadic network lag, and occasionally lost connection altogether. At street level, the signal carried well through the house and into the backyard, as well as the park out front, so this is a situational issue, and one you should consider with any router.

As a means of delivering wireless Internet, the WRT3200ACM is just as capable as a number of other routers we’ve reviewed at the price point. If you’re paying more, you want some extra functionality, and the WRT3200ACM sets itself apart by saving a seat at the table for open-source software, but it’s not the only high-end networking solution with a trick up its sleeve.

There’s no shortage of options for high-end routers, and the $200-300 price point is crowded with them. If your house has a particularly far-reaching layout, the Portal supports several devices for mesh networking, and special tech to get around interference. If you need more bandwidth, Linksys’ own EA9500 brings the total up to 5.4Gbps – but it’s fairly massive, and usually runs $50-100 more than the WRT, without open-source software support.

Wireless networking has been a moving target since it launched, with new specifications and revisions constantly rolling out. Fortuantely, the WRT3200ACM is equipped with a solid feature set — 802.11ac, MU-MIMO, USB 3.0 — and installing DD-WRT opens up even more options. You may never opt to do so, but down the road it could provide some extra longevity.

Yes. If you’re looking for a router with lasting power and enough oomph for a demanding network, the WRT3200ACM is a solid choice. It expands its potential with the promise of continued support for DD-WRT and other custom software solutions. Even if you don’t take advantage of that, you’ll find a wireless router that provides strong performance right out of the box, without the headaches often associated with performance.