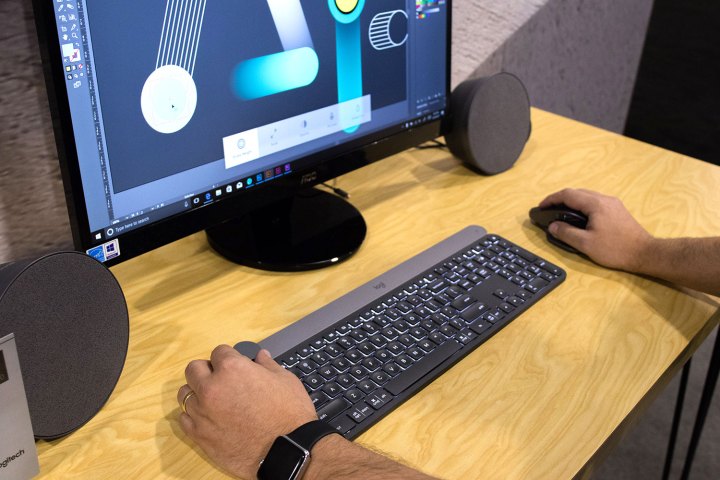 On the surface, Logitech’s new Craft keyboard looks like a run-of-the-mill, low-profile wireless keyboard with a copycat Microsoft Surface Dial bolted on (Logitech calls it the Crown). In practice, it’s much more than that, offering a surprising amount of control for such a seemingly simple addition to a standard keyboard.

As this keyboard is primarily targeting creatives who rely on applications like Adobe Photoshop, we are approaching our Logitech Craft review from that perspective. The keyboard also offers benefits for non-creative uses, but for these non-creatives, the $200 price tag might be harder to swallow.

The keys to success

The design of the Craft is simple but effective. Beyond the creative applications of the Crown, Logitech has taken steps to make this a great keyboard for typing. Typing enthusiasts (yes, they exist) aren’t likely to give up their beloved IBM Model F, but after banging out a couple thousand words with the Craft (including this article), we can confirm that it does feel quite nice. The keyboard also has a nice weight to it with very sticky rubber feet, so it won’t slide on your desk, even if you fire off a hotly worded email in all caps

Logitech redesigned the keycaps with a circular indent to help guide your fingers into the right position. The company says this helps with accuracy, but we’re not sure if it makes a huge difference. At any rate, it does feel quite comfortable, and the keys offer a good amount of resistance and spring back quickly. They are also backlit, and the light will turn on automatically when your hands approach the keyboard and off again when you remove them. Given that the Craft is wireless, this probably helps save a little battery life (which Logitech claims is good for one week).

The Craft connects over Bluetooth Low Energy or via Logitech’s Unifying receiver. There are no batteries to replace; instead, simply plug the keyboard in via USB Type C (a cable is included) and you can continue to work while it charges.

The Craft’s most notable feature is the Crown, a free-rotating input dial that resides on the upper-left corner of the keyboard. In addition to turning it, it can be pressed like a button and is touch sensitive. Purely from a design perspective, it makes the keyboard look a little off balance as it leaves a lot of empty space along the top bar. Other than the Crown, there’s just the battery status light on the right.

The Craft offers a surprising amount of control for such a simple addition to a standard keyboard.

Logitech told Digital Trends it went through numerous other ideas, including a touch interface similar to the Touch Bar on the MacBook Pro, but after listening to input from creatives, it ended up with the single dial on the left side. The idea is to keep your right hand on the mouse and with your left hand on the keyboard where it can reach the Crown and common keyboard shortcuts, all at the same time and while your eyes remain forward on the monitor.

This scaled-back approach is a bit different from bespoke creative control interfaces like Palette and Loupedeck, which offer multiple dials, nobs, and buttons. Instead, Logitech relies on a custom driver to make the Crown more versatile than it looks.

It begins with context sensitivity, and the Craft ships with specific commands for several applications from Adobe and Microsoft. In Adobe Photoshop, for example, simply tap the side of the Crown to move through the a list of commands displayed at the bottom of the screen, which will change depending on which tool is selected. Simply rotate the dial to adjust the selected parameter, which might be opacity, blend mode, or brush size. Remove your hand from the Crown, and the onscreen display fades away.

Although not available at the time of our review, Logitech has since updated the Craft with official support for Lightroom Classic, as well. Similar to Photoshop, tapping the Crown selects a parameter while turning it adjusts it. You can choose which adjustments are available via the Crown, so you can customize it for your own personal editing style. By default, color temperature, tint, exposure, and contrast are active, but you can select more within the Logitech Options app.

In a web browser, you can use the Crown to cycle through your open tabs, which is much more efficient than clicking on them or using the often complicated default keystrokes for tab switching.

In addition to preinstalled application profiles, you can program the keyboard manually for other applications. Currently, this is somewhat limited: You can set custom keystrokes for turning the dial or pressing it, but you can’t set multiple different parameters to cycle through by tapping it.

At $200, it isn’t exactly cheap, but it does provide value for the right users.

After our initial review, Logitech also released its promised Craft SDK, which will allow developers to add native support for the Crown. Potentially, this could increase the rate at which apps receive official Craft profiles, but we hope that Logitech continues to create its own. We don’t exactly expect the likes of Apple to adopt the SDK into their own apps anytime soon.

One small detail we really like is how the Crown provides two different styles of movement, based on context. In the sort of infinitely-variable parameters found in Photoshop and Lightroom, like adjusting brush size or brightness, it turns freely and smoothly. In other situations, such as switching tabs or turning up the volume, a physical ratchet mechanism engages that provides satisfying click points and good tactile feedback. This makes a huge difference in actual use and feels much better than the vibration-based haptic feedback of the Surface Dial.

Is it worth it?

Logitech’s streamlined and simple approach means the Craft gives added control and flexibility without complicating the experience. At $200, it isn’t exactly cheap, but it does provide value for the right users — namely, photographers and video editors. It’s a great keyboard all around — there isn’t anything that’s directly comparable — but it is in creative applications where it really shines.

That said, it does offer some benefits to non-creative tasks. Rotating the Crown to turn up volume or adjust brightness, or even using it just to scroll down a long list of emails in your inbox, is a surprisingly refreshing experience — even if it’s not altogether faster than using keyboard shortcuts. The Craft comes with profiles for Microsoft Excel, Word, and PowerPoint.

At the time of this review, the only thing really holding it back was the lack of native support for more applications. Now that support has been added for Lightroom Classic, photographers have more reason to consider the Craft. We’d still like to see profiles for Lightroom CC and Apple’s creative apps (Photos, iMovie, Final Cut Pro). Even as it is, however, the Craft has certainly grown on us. It will be hard to go back to a standard keyboard.

Updated to include new application support for Adobe Lightroom Classic announced on February 28, 2018.