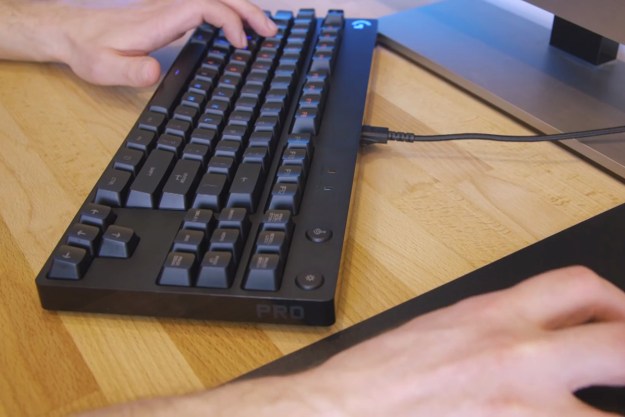 “The Logitech G Pro mechanical keyboard is a must-have for eSports athletes and general PC gamers.”

The PC gaming market is a huge money-maker. It’s a major component in the progression of technology, and has even become a platform for desk jockeys to transform into athletes in the virtual arena. Logitech recognizes and supports the growing professional eSports industry, and now provides a new tool for their arsenal: the Logitech G Pro Mechanical Gaming Keyboard for $130.

The selling point behind Logitech’s new mechanical keyboard is speed. As we previously reported in the product announcement, the company focused on three aspects when developing the Logitech G Pro — keystroke actuation, signal processing, and sending the information through the PC’s USB port. That starts with Logitech’s in-house Romer-G mechanical switches, which promises up to 25 percent shorter and faster actuations than competing mechanical switches, and a durability of up to 70 million key presses.

As a reminder, actuation refers to the point where the pressed key creates an electrical contact recognized by the keyboard’s processor. Thus, the key switch needs to make this happen quickly without the process feeling “mushy” to the user. Mechanical keyboards are popular with PC gamers because of their durability, their reliability, and the sense of accomplishment they offer when a key is pressed and processed on-screen.

The Romer-G switch travels 1.5mm to create the electrical contact (3.0mm total travel distance), and takes 45g of force to travel that distance. By creating a switch with a short actuation distance, Logitech is looking to shave milliseconds off the user’s input. This is backed by fast keystroke signal processing ensures the correct actuated signal is sent to the PC. Per the company, the processor can accurately grab the correct signal despite all the “chatter” and “bouncing” caused between the contacts in the switch before making contact.

This helps in online-enabled games like Counter-Strike: Global Offense and DOOM. Game servers refresh the virtual game state multiple times per second to change the environment and player actions based on the inputs of all users. Thus, if the user’s keyboard strokes are processed faster, their input might be processed by the server before other opponents using slower keyboards. Logitech claims its new keyboard is 10 milliseconds faster than Razer’s BlackWidow Chroma V2.

Adding to the fast processing rate is the keyboard’s promise of a 26-key rollover. That’s an impressive number of keys to press simultaneously, given that humans only have ten fingers. But this feature means any combination of keys can be registered correctly and simultaneously for executing special commands properly on the first attempt. Our test using the free Aqua’s KeyTest tool verified that at least ten inputs were correctly registered at the same time without a hitch.

While all of this may sound like mumbo jumbo, this is relevant information to competitive PC gamers and professional eSports athletes. The specifications sound ideal for any PC gamer who wants the benefits of a mechanical keyboard without the bulk of added macro keys, media keys, and the number pad, all of which are absent here.

The keyboard’s overall dimensions are 6.02 (H) x 14.19 (W) x 1.35 (D) inches, and its weight is 2.2 pounds without the USB 2.0 cable. Notice we said “without,” as the cable can be detached from the keyboard body for better storage. The connection is three-pronged, with the center consisting of the actual USB plug and the other two prongs serving as anchors. This helps keep the cord connected during play.

The keyboard comes packed with on-board storage to house the user’s customized settings. This is where Logitech’s free software comes in for conjuring up profiles for specific games. Because eSports athletes can’t use additional software during tournaments, these settings must be configured, storage on the keyboard, or pre-loaded prior to a competition. Logitech’s tool manages that and saves the settings to the keyboard, for use with any PC the keyboard is connected to.

Bells and whistles are great, but what counts is whether the keyboard performs, and this one does.

Users can assign commands to the 12 function buttons. Logitech currently provides a huge list of supported PC games old and new in downloadable profiles including DOOM, The Elder Scrolls V: Skyrim, Fallout 4, Star Wars Battlefront, and more. These profiles don’t automatically assign commands to the function buttons, but instead require the gamer to assign the commands and then save the profile to the keyboard.

In a separate section of the Logitech Gaming Software tool, users can create profiles for each game that locks out unnecessary buttons. The provided DOOM profile merely locks the Windows key, the Function key, and the Menu key. But users can essentially lock any key they will never use, to prevent accidental key presses during heated gameplay. As an example, left-handed gamers using the arrow buttons to move around in virtual space may choose to lock the keys in the WASD region just in case.

The same holds true with the keyboard’s RGB illumination. The lighting section in Logitech’s software provides the means for setting the stage for a desktop-sized light show, or limiting the lighting to just the necessary keys. Thus, in addition to locking specific keys to prevent accidental keystrokes, users can create a lighting profile for each game to illuminate only the keys they use, which helps players better locate the keys they need in an instant.

More specifically, the means for assigning illumination is found inside the tool’s Lighting Modes section. Here users will see an option to enable per-profile backlighting that will load up a list of installed games to select its pre-set lighting. However, these profiles can be modified to match the user’s gameplay style, enabling lefties to illuminate just the arrow keys and other needed keys when playing DOOM. This lighting profile can be saved directly to the keyboard.

A keyboard even the Scarlet Speedster will love

While all the bells and whistles are great, what counts in the end is whether the keyboard performs admirably or not, and it certainly does. Unfortunately, we didn’t have Razer’s BlackWidow Chroma V2 mechanical keyboard in-house for a performance comparison, but instead the company’s older full-size BlackWidow Ultimate 2013 model that relies on Cherry MX Blue switches. These switches require 50g of actuation force, so we really can’t compare the two models outside their audible differences.

That said, Cherry MX Blue switches are “clicky” in that they generate a very audible click, and require more force by the user to actuate the keystroke. The release point for the top metal contact is above the actuation point, creating a “free falling” effect that makes double-tapping difficult. Why Razer chose to use Cherry MX Blue switches in its keyboard is unknown given that Cherry MX Red units are ideal for PC gaming, but Razer now creates custom in-house switches for its mechanical keyboards, so the speculation is pointless at this point.

With Logitech’s Romer-G switches, we don’t really know all the hardware details that make them unique compared to Cherry MX switches. But on an audible level, they’re much quieter than Cherry MX Blue units by providing a dull, hollowed “thump” instead of a loud, sharp “click.” They also feel more “sensitive” in-game because of the low actuation force needed to initiate a keystroke. Barely pressing down on a movement key in DOOM showed a slight movement on-screen.

Of course, there are other factors adding to the illusion of keyboard “sensitivity” including the PC’s performance and the display’s refresh rate. To test this keyboard, we used an Alienware 17 R4 gaming laptop sporting the following ingredients:

While Alienware provides a decent illuminated keyboard in its gaming laptops, it doesn’t replace the feel, response, and reliability of a mechanical keyboard. Whether customers with a gaming laptop will want to lug around an additional mechanical keyboard will likely depend on where and how they plan to play their games. But at least Logitech’s new G Pro unit is compact enough that it could fit into the laptop bag. Having a detachable USB cord helps in the portability factor too.

Outside the actual key switches, the key caps have a very light concave curvature, so the user’s fingers don’t feel “locked down” when moving from key to key. By comparison, the key caps used on Razer’s BlackWidow Ultimate 2013 keyboard are the same size (0.5” x 0.5625”) as what’s provided on Logitech’s unit, but they feel “deeper” than Logitech’s caps by sporting what feels like slightly higher boundaries.

The overall build of the keyboard is solid, too. The top black plate features a dull finish matching the keycaps, the sides have a glossy finish and rounded edges, and the bottom plate consists of a dull finish with a pattern of glossy, slanted lines etched into the surface. The bottom also consists of five rubberized no-slip pads, and two angle adjustment legs packing an additional adjustment leg on each side. This enables the keyboard to sit flat, with a four-degree angle, or with an eight-degree angle. Nice.

The Logitech G Pro Mechanical Gaming Keyboard is a great choice. The on-screen response to keystrokes feels fast and sensitive, which is perfect for the professional eSports PC gamer. It’s compact, lightweight, and comes with a detachable USB. The keyboard’s customization is also a huge selling point for any PC gamer wanting an edge over the competition, whether it’s in a public tournament or general online gameplay at home.

That’s a good question. What we’ve reviewed so far in the mechanical gaming keyboard department consists of full-sized models packing the numeric keypad and dedicated macro keys. We need to test additional units before declaring if there is a better product, but Corsair’s new K63 mechanical keyboard is on the way for our testing. However, Corsair’s unit doesn’t specifically target the professional eSports crowd.

The “tenkeyless” mechanical keyboard market for PC gamers and professional eSports players is here to stay, and Logitech is just one of the suppliers. Keyboards tend to be reliable, and we have no reason to think Logitech’s will be the exception. It could last you a decade or more.

Yes. Banging on its semi-quiet keys feels just right, and the on-screen response feels in-tune with the user’s brainwaves. That’s somewhat of an exaggeration, but the speed of the keystroke commands and the responsiveness of the actual keys should leave PC gamers feeling they’re getting things done rather than succumbing to the drawbacks of laggy input. The illumination and customizable profiles packed into Logitech’s new keyboard are icing on an already delicious cake.