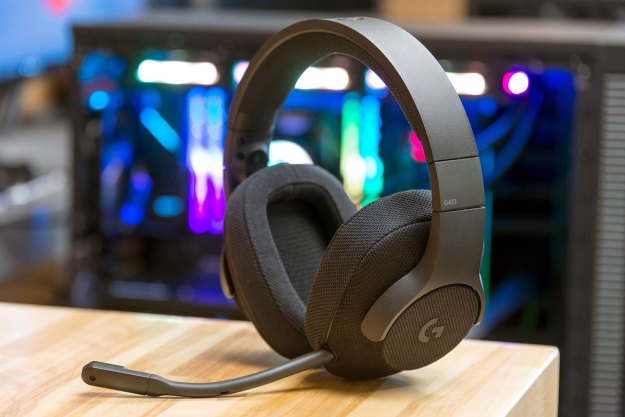 “Logitech’s G433 is a great looking headset, but its beauty is only skin deep.”

We often criticize gaming headsets for their cheesy designs, but we’d always rather have something that sounds good first, and looks good second. After all, gaming headsets are designed for communicating with teammates and exploring the virtual world, not the real one, and few people will likely see them anyway. However, Logitech seems to have flipped these priorities with the G433. While the exterior design is fit to compete with the latest from Beats, as we discovered in our Logitech G433 gaming headset review, the company may have put a little too much effort into looks, and not enough into performance.

After slipping off the box’s outer shell, the magnetized lid unfolds to reveal the G433 resting in a shell of molded plastic. The first impression is a strong one: The headphones are sleek and minimalist in design, cloaked in a single shade of black in matte across the headband, and mesh along the earcups.

Removing the headset uncovers a small collection of accessories, including USB and 3.5mm cables, instructions, a detachable mic piece, and even an extra pair of earpads with a suede fabric instead of mesh. Also inside is a circular soft-zipper case for toting the G433 around.

Depending on your system of choice, you’ll plug in either the USB cable (for PC or PlayStation 4), or the 3.5mm cable to connect to an Xbox One, Nintendo Switch, 3DS, or mobile device. If you’re using a PC you’ll need to download drivers from Logitech’s website to enable 7.1 surround sound — otherwise you’ll be good to go for stereo listening.

As we’ve alluded to, we really like the G433’s look. The succinct, single-color design is disrupted only by the stylized Logitech “G” on the earcups and headband, and unlike the decals for most gaming headsets, they’re tastefully designed for a pinch of visual flair. The attractive design makes sense considering Logitech is marketing the G433 as a pair of cans that easily transforms from a gaming headset to your daily headphones for music.

To make a quick transition from gaming to listening, the G433’s removable mic attaches easily via one of two 3.5mm jacks on the left earcup. The mic arm is highly articulate – more so than many other headsets we’ve reviewed – and stays put, making it easy to find an optimal spot.

The G433 includes every wired connection option you could want, though it falls just short of the plug-and-play nature of the Cloud Revolver S, whose USB virtual surround card can be used with both PC and PS4. The G433’s virtual surround, on the other hand, can only be used with PC, but since it’s a wired headset it can be used in stereo mode with PC, Xbox One, PS4, Nintendo Switch, and iOS or Android mobile devices.

The G433 has an attractive design that works as both a headset and headphones.

While we love the look, putting the G433 on is a different story. The clamping pressure is fairly severe for the first few hours, and even after breaking them in, they’re not very comfortable. This is largely due to the mesh fabric covering earpads. It’s stiff and scratchy, especially after longer gaming sessions. The second pair of suede earpads feels better, but only marginally so. Like the band, both sets of pads eventually break in, but we still never found them as comfortable as even the G433’s predecessor the G533, which is surprising considering it uses a similar mesh covering for the pads. That said, we do appreciate the G433’s lightweight construction, clamping force and scratchy fabric notwithstanding.

Despite these gripes, the G433 do have some positives. We especially appreciate the inclusion of a few more accessories than you’d normally get with a headset. It’s not much, mind, but the soft carrying case and (cables) is a modest improvement from the standard components included with most headsets. Finally, while the unit we tested was black, we also appreciate the availability of multiple colors, including blue, red, and blue/black camo.

We won’t bury the lead here – the G433 are not the greatest sounding headset. With gaming headsets, a strong seal around the ears is important for keeping your gameplay in, and outside noises out. The G433 have very poor sound isolation. In fact, when we put them on, we weren’t sure if they were open or closed backed, it’s that noticeable.

We first gave this headset a go while playing the recent Destiny 2 beta and the recently released Final Fantasy XII: Zodiac Age. The G433 suffers from a distinct lack of bass, which left both games feeling gutless. Gun shots in Destiny 2 – arguably one of the primary highpoints of the series’ gameplay – sounded tame compared to the way sound in beefier headsets like the Cloud Revolver S or the Sennheiser GSP 350. In Final Fantasy XII, a game largely defined by its masterful orchestral soundtrack from composers Hitoshi Sakimoto and Hayato Matsuo, the music lacked texture and fullness, coming across as hollow.

Elsewhere in the mix, we noticed the upper register getting a bit muddy, and at higher volumes there was some distortion.

The mic arm is highly articulate, making it easy to find an optimal spot.

Compared to the G433’s more expensive wireless predecessor, the G533, this is a noticeable step down both in terms of sound quality and comfort. One could argue that the G433 being $50 cheaper than its older sibling is a point in its favor, but other $100 headsets like the Arctis 5 offer better quality, and even the Astro A10, which is just $60, outperforms the G433 — especially in terms of sound isolation.

The G433 does have one redeeming feature when it comes to audio quality: Virtual 7.1 surround sound. Though virtual 7.1 has become common among most serious gaming headsets out there, you’ll often have to cough up $150 or more to get it. As usual, we opted for a multiplayer shooter to test out the G433’s surround sound accuracy, specifically Overwatch. It worked well enough, making for more accurate sound staging, but we wouldn’t call it a massive improvement simply because the general sound quality is just passible.

The final piece of performance critique is the mic. In testing, we found the G433’s mic to be decent quality compared to similar headsets – that is to say, it’s good, not great. It does have an edge over the mics on other headsets thanks to the G433’s mic being so articulate, so easy to find the perfect position, and once you’ve found it, it won’t budge. But that’s about it.

According to Logitech’s support site, the company offers a two year limited hardware warranty for the G433.

In the end, this headset is mostly just “okay.” The best feature is the way it looks, but that’s immediately undermined by the way it feels. On the one hand, the variety of color options and small batch of accessories makes for a decent $100 option. But in many ways, it lags behind even less expensive models, specifically the Astro A10 and Arctis 3.

As mentioned above, $50 more lands the G533, which is more comfortable, sounds far better, and is wireless (though only compatible with PC or PS4). For something wired at the same price point, the Arctis 5 does everything the G433 does, but better, and with the added benefit of offering the best virtual surround software available. If you’re looking for something cheaper, the $80 Arctis 3 or the $60 Astro A10 are great alternatives, too.

Logitech has clearly put most of its focus into the G433’s looks rather than performance. While that makes it much more enticing to take on the road, you’ll easily find a reason to leave these behind once you put on something more comfortable and better sounding.

No. On paper, this is a great headset; in execution, it’s only passible. The only reason we could recommend it is because of how good it looks and how light it feels when wearing it. But for serious gamers, there are better options out there.