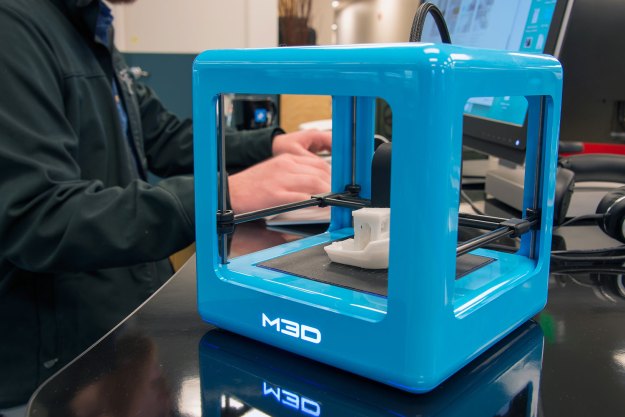 “It’s the best 3D printer under $500, but the Micro’s spotty reliability and size limits left us longing for more.”

It used to be that getting a 3D printer for less than $500 was downright impossible. But as the technology matured over the years, designers and manufacturers found ways to bring it down to a price that regular people can afford.

A number of enterprising young startups have sprung up to make this happen, and a few of those projects have now hit the market. M3D’s Micro was one of the first — but can this $350 printer actually stand up to the Makerbots and Ultimakers of the world? We put one through a couple months of brutal testing to find out.

Don’t let the small price tag fool you: Despite the incredibly affordable price, M3D managed to give this little workhorse a bunch of impressive features.

First and foremost, it boasts a max resolution of 50 microns, which is pretty damn good for the price. That’s on par with MakerBot’s fifth-gen Replicator, and double what most printers in this price range offer. It also goes up to 350 microns, for when you’re in a hurry and don’t care about precision. (Although as we found out, it’s slow no matter what size you choose. More on that in a bit.)

The printer itself is tiny, measuring just 7.3 inches in every dimension (it’s a cube) and weighing just 2.2 pounds in total. That’s great for portability, but unfortunately this small size gives the printer a correspondingly small build platform of just 4.29 inches by 4.45 inches. That’s impressive relative to the size of the printer, but no matter how you dance around it, it’s still a tiny build envelope. You won’t print anything large with this little guy.

As for materials compatibility, the extruder can handle ABS, PLA, nylon, and M3D’s color-changing “chameleon” filament. As an added bonus, it also features a removable, flexible print bed.

Out of the box, the Micro is fairly simple to get started with. It’s definitely not the simplest process we’ve encountered in a 3D printer, but it’s fairly painless compared to some of the others that we’ve tested in the past, like the 3D Systems Cube or Ultimaker 2.

The printer itself is designed with a unibody frame, so there’s nothing for you to assemble or adjust; just pop in the printing filament, secure the build plate, and start printing. There are also no onboard controls, so all setup and calibration is performed through the accompanying desktop app, which is simplified to the point of being nearly foolproof. This has its own set of drawbacks, but it does keep things simple. If you can handle Ikea furniture, you can set up this printer.

With its small stature, rounded edges, and colorful enclosure (ours was blue), the Micro is definitely one of the cutest little printers that we’ve ever laid eyes on. It’s certainly not sexy, sleek, or neo-industrial, but the simple and playful exterior makes it more inviting than most printers.

You won’t print anything large with this little guy.

It’s surprisingly stout, too. Despite the fact that it’s made almost entirely of plastic, the Micro’s frame is actually sturdy and robust. The unibody cube shape is rigid, and despite their flimsy appearance, the printer’s carbon-fiber gantry rails are quite strong and durable. We regularly hauled the Micro back and forth between home and office, and even after getting tossed into the back seat of a car or stuffed in a backpack (yeah, you can totally do that), it never once showed any sign of damage or malfunction. The materials it’s built from might be cheap, but the Micro’s construction is top notch.

Aside from the frame, the printer boasts a few interesting design elements — arguably the most significant is the extruder, or hot-end assembly. This is basically the brains of the entire machine, and contains a motion-sensor chip that enables intelligent positioning feedback. In other words, the extruder knows when it hits the build plate and can adjust itself accordingly, so calibration is a breeze.

This is actually pretty important, since the flexible, removable build plate can shift a few microns higher or lower between prints. The Micro’s design probably wouldn’t work without this auto-calibrating functionality.

The extruder is made from “aerospace-grade ceramic,” and according to both M3D’s claims and our independent tests, this lets the extruder tip reach the necessary temperature very quickly. You won’t find yourself waiting around for the Micro to heat up before each print, which is quite nice.

Absolutely everything on this printer is controlled via the accompanying desktop software. In most cases, this would be hugely annoying,  but since the printer is small enough to easily fit on your desktop, right alongside your computer, it’s really not that much of an issue.

The program is functional, and actually quite easy and intuitive to use – it just doesn’t look pretty. It provides very easy access to the machine’s most important functions, and you’re never more than a couple clicks away from whatever you need to do,  be it calibrate the machine, remove the filament, or return the print head to the home position. It’s all right there at your fingertips … mostly.

For all the easy access the Micro gives you to its basic functions, many more advanced features are missing. Layer height and support structure options are there, but things like print-head speed, infill density, and wall thickness settings aren’t available to the user. This arguably makes it easier and more approachable to the casual user (likely M3D’s target market), but it also limits what the machine is capable of doing.

Overall, the simple interface is a win at this price level, but there’s definitely room for upgrades and updates.

When it comes to putting filament down, we quickly noticed one thing about the Micro: It’s outrageously slow. Even before we started running it through speed tests, it was clear that this machine is more of a tortoise than a hare.

How slow? To get a more exact idea, we printed a range of 1 × 1 × 1 centimeter cubes with varying resolution and infill settings. At the lowest resolution (350 microns) and the lowest infill settings — the fastest possible configuration — it took the printer just over 11 minutes to finish the cube. In comparison, the Ultimaker 2 can print the same cube (with 100 micron resolution and 100 percent infill, no less) in about 7 minutes and 50 seconds.

At medium resolution and medium infill, the Micro took even longer to make the cube — a full 18 minutes and 27 seconds from start to finish. At high resolution and high infill, those numbers jumped to over 26 minutes. We couldn’t get a solid read on the printer’s “Extreme” resolution setting because it always broke off the build plate before the print finished, but based on the previous tests, it’s probably safe to assume that it would’ve taken well over a half hour.

Speed is definitely a pain point, but luckily the printer’s accuracy and fidelity impressed us. Fine details came through pretty well on our 3DBenchy tugboat, and it didn’t seem to struggle too much with small unsupported spans and overhangs. Layers also remained fairly consistent along the X and Y axes, which is often a struggle for printers in this price range — and sometimes even for printers that cost six times as much.

When the printer successfully completed a print, it was usually high quality — but unfortunately completion is half the battle. We had a fair bit of trouble printing things from start to finish without something going wrong, even when we used M3D’s built-in safeguards.

The root of the problem is hard to nail down, but most of the Micro’s reliability issues seem to stem from its flexible, unheated bed. Often, adhesion problems on the first few layers would cause the print to lift up from its foundation, get nicked by the print head, and eventually detach from the build plate completely.

This machine is more of a tortoise than a hare.

M3D offers a few print settings that can help prevent this, including rafts, brims, and this weird new feature called “wave bonding.” The latter (which we’ve never seen or heard of in any other printer) basically prints the first layer of an object in big, wavy blotches instead of thin, straight lines. This supposedly creates more anchor points on the bottom of the object and helps it adhere to the build plate more effectively.

The thing is, even when M3D’s clever adhesion-boosting options worked, we still experienced filament adhesion problems. Oddly enough, the rafts usually stuck to the print bed just fine, but often the object itself wouldn’t adhere to the top of the raft properly. When this happened, it almost always led to warping and misprints.

Maintaining this printer is a breeze. As mentioned, the accompanying software gives you a large degree of control over the Micro, so most problems are simple to fix. Filament jam? Just unload the filament and check the spool for tangles. Clogged extruder? Manually heat up the hot end and force-feed some filament through it. The process is cumbersome at times, but definitely not a big barrier to usability.

It’s also fairly easy to repair from what we can tell. Nothing major went wrong with our review unit during testing, but the Micro’s simple construction provides you easy access to the machine’s innards should you need to get under the hood. The hot-end assembly can be popped open without any tools whatsoever, and the printer’s bottom plate can be removed with a hex key for access to the motors.

For making upgrades, forget about anything other than firmware updates. The Micro isn’t designed to accommodate new components or accessories.

After testing the Micro for the past few weeks, we’re convinced that the Micro is one of the best 3D printers you can buy for under $500. But it’s important to note that the old adage “you get what you pay for” still applies. This machine definitely isn’t on par with the Makerbots and Ultimakers of the world.

If you’re looking for an affordable printer for ambitious personal and professional projects, you should probably continue your search. The Micro’s sluggish speeds, spotty reliability, and tiny print volume are going to leave you wishing you’d purchased something more advanced.

On the other hand, if you’re a beginner looking for a low-cost, low-risk way to dip your toes into the world of 3D printing, the M3D Micro is a solid choice. Sure, it has flaws, but for just $350 this printer will get you plenty of bang for your buck. It’s insanely easy to use and maintain, and it offers print quality that rivals printers three times the price. This makes it ideal for kids, or teachers looking for a fun way to get students interested in STEM.

The Micro works, but our search for 3D-printed perfection in the sub-$500 category continues.