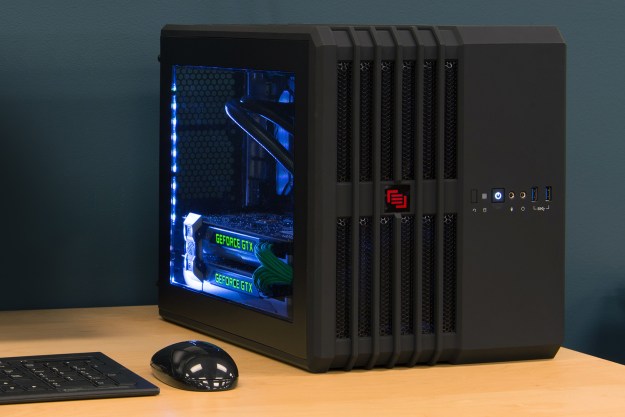 “Maingear’s deceptively bulky X-Cube is still a top performer and a great value.”

Small form factor desktops have been cool for over a decade, and they’ve struggled to find mainstream acceptance for just as long. The idea of a compact, efficient, yet powerful PC seems futuristic, but few gamers seem willing to spend more to receive the same hardware in a small footprint.

But that hasn’t kept manufacturers from trying, and Maingear remains at the forefront of the battle for small form-factor acceptance. It offers four systems that are arguably SFF, though the Maingear Potenza, at 16 inches tall and 9 inches wide, is borderline.

The X-Cube is the company’s second most powerful pint-sized option, behind the Torq, but despite its small stature, it provides a wide range of option from the basic H110 model to the range-topping X99. Our review unit came packing a Z170 motherboard with an Intel Core i7-6700K processor, two GTX 980 Ti graphics cards, 16GB of RAM and a 400GB Intel 750 series hard drive.

That’s impressive hardware. It’ll cost you, of course, and the as-tested price rings up to about $3,650 – but that’s not a fortune for what’s inside. Does this rig deserve a place on your desk, or does its size work against it?

The X-Cube arrives encased in Corsair’s Carbide Series Air 240 enclosure, albeit with a Maingear logo. As the name implies, it’s laid out as a rough cube measuring about 13 inches tall, 18 inches deep and 16 inches wide.

This brings up an immediate question – is this really a small form factor PC? While its cube format looks small, the actual volume it takes up is about 50 percent more than the Maingear Vybe, the company’s mid-tower. The X-Cube is also five pounds heavier. Maingear describes the X-Cube as “top-tier performance in a small, space saving package,” but the math suggests it isn’t saving space at all.

Size aside, the Corsair looks nice. It can be positioned either on its side or bottom, though the second does block an air vent which does not have a fan installed in it. The multiple fan vents make it clear the X-Cube means business, but liberal use of simple, matte black gives the system a stealth look.

Maingear unfortunately ruins that with a rather tacky strip of LED lights. Lighting is kind of expected in a gaming rig. I get that. But more could’ve been done to make the lights appear integrated into the system. It’s just a strip of LEDs around the edge of the interior, something a competent home builder could accomplish.

That sums up the X-Cube’s aesthetics difficulties. It looks alright, but it’s not much different from what could be built at home. A few years ago all manufacturers struggled with amateur design and off-the-shelf enclosures, but now a number of companies offer partially or fully customized cases. Origin and Falcon Northwest are the highlights in this regard, but Digital Storm also offers it – for some models.

A PC in port

As with any PC from a custom system builder, connectivity will depend on the options you select. The only set ports are those on the front panel, where there are two USB 3.0 along with jacks for a microphone and headphones. That’s a decent allotment, though a few competitors up the ante by offering four USB ports rather than two.

Odd, but easy to work with

The X-Cube is a bit difficult to understand, at first. Its cube layout places the motherboard in a “compartment” separate from the hard drives and power supply. Cords runs through the compartment wall to provide power and data connections. This is made more confusing by the enclosure’s dual hard drive cages, one for 3.5-inch drives, the other for 2.5-inch. Neither appears accessible at first glance.

Is this really a small form factor PC?

Closer inspection reveals they’re quite easy to access – entry is just hidden. The 3.5-inch drive is behind a strange, tiny removable panel on the rear of the case, while a side panel protects the 2.5-inch drives. Drive access is a cinch once those are out of the way.

In fact, everything in the case is easy to service. Processor, RAM, video cards, and hard drives can all be reached and removed by taking off a single panel and removing a few screws. The fans, and the radiator for the liquid processor cooler, are well out of the way. The only component that might be tough to remove is the power supply, as it’s tucked into a tight position. But even that would be no major trouble, and it’s the part least likely to be replaced or serviced.

The heart of the X-Cube is Intel’s Core i7-6700K, the most powerful quad-core currently available. Maingear’s “Redline” overclocking service was part of our build, and increased the base clock from its standard 4GHz to 4.7GHz.

Our tests revealed that speed to be a bit unstable. Digital Trends runs several behind-the-scenes tests, one of which is Handbrake, which tends to push a processor that’s just barely unstable to its breaking point. It defeated the Maingear’s overclock. As a result, I reduced the overclock to 4.6GHz, which remained stable, for benchmarking.

Now, onto the scores.

There’s no real surprise here. The X-Cube’s score in GeekBench is ever so slightly lower than other systems we’ve recently reviewed. A lot of that has to do with the 4.6GHz clock speed, as many competitors hit 4.7GHz or 4.8GHz when we tested them.

That’s not Maingear’s fault. A processor propensity for overclocking is largely based on its inherent properties. Even cooling will only do so much. Buyers should expect the X-Cube, overclocked or not, to fall into the same range as any other Core i7-6700K desktop.

Storage is where this system becomes interesting. It uses an Intel 750 Series solid state drive with 400GB of capacity as its primary OS drive. A 3TB mechanical drive provides mass storage. Surprisingly, the drive is in a 2.5-inch format rather than a PCI card, as were all previous examples we’ve seen.

The 750 is a fast drive in any form factor, and it proved its worth here, scoring sequential read speeds of 1,481 megabytes per second and write speeds of 973 megabytes per second. Only the Origin Millennium Battlebox and Falcon Northwest Talon scored higher when we reviewed them. Each was equipped with a Samsung SM951 solid state drive offering 512GB of capacity.

1080p is still by far the most common resolution found in the wide world of PC gaming, but it’s no longer demanding for even mid-range hardware. The X-Cube is more than up to the challenge.

Maingear’s rig did well across the board here. It boasted the second-highest score in Heroes of the Storm, hit the game engine cap of 200 FPS in Battlefield 4, and also won in Crysis 3, where it scored a whopping 97 FPS. These results make it clear the X-Cube configuration we received is over-matched for 1080p. Even 1440p shouldn’t be a match for this PC.

Now it’s time for the real challenge — UltraHD. A resolution of 3,840 x 2,160 crams in twice the pixels of 1080p, drastically upping GPU processing load and, just as importantly, memory consumption. What did that do to the X-Cube?

Heroes of the Storm and Battlefield 4 remain manageable despite the jump in pixel count. The former renders at almost 100 frames per second with everything turned on, while the latter hits an average of 77 FPS, the highest of any system we’ve recently tested. Crysis 3 is playable at Very High detail, though its score of 30 FPS isn’t the highest, and many PC gamers would prefer smoother gameplay.

Overall, the X-Cube accounts for itself well in games. It wasn’t always at the top, but it often was near, and it had several notable victories. This is no real surprise, as the system’s video card setup – a pair of GTX 980 Ti — is identical to many competitors we looked at in our Skylake desktop round-up.

A system like the X-Cube is always going to consume a lot of power. At idle, I measured it eating 79 watts, and at full system load it gulped down 556 watts. That’s a lot of power, but it’s not as much as some competitors. When we reviewed the Digital Storm Velox and Falcon Northwest Talon, both equipped with two GTX 980 Ti cards and an overclocked Core i7-6700K, we found they need 650 watts each. Compared to them, the X-Cube is efficient.

That didn’t lead to low noise, however. At idle the desktop hummed away at a lazy 42 decibels, which is reasonable. Once I fired up a game, though, noise generation soared as high as 54.4 decibels at its peak, and hovered around 52dB in most situations. That’s very noisy, even for a gaming rig. The quietest system we’ve recently reviewed, Origin’s Millennium Battlebox, put out just 39.6dB at full load.

The X-Cube always ships with what Maingear calls “Lifetime Angelic Service.” This consists of free labor costs for repairs and free phone support. It also has a one-year warranty, though shipping is only covered both ways for the first thirty days after purchase. The level of service offered here is on par with the competition.

A two-year warranty is available for $100, and a three-year warranty is $200. This is on par with Falcon Northwest and less expensive then Origin. Digital Storm’s warranties are also similarly priced, though a bit more complex, because the company doesn’t offer free lifetime labor.

Want the most immersive gaming experience? An ultrawide monitor can be the way to go, and Dell’s excellent U3415W is one of the best.

Maingear’s X-Cube is difficult to evaluate. Our review system’s as-tested price of $3,650 is reasonable for the hardware. In our recent Skylake desktop shoot-out, which pit four mid-towers against each other, the average price was $4,065 – despite the fact the systems had almost identical hardware. That makes this rig a good hardware value. It offers performance similar to other performance desktops we’ve recently tested, but costs a few hundred less, and to some gamers that’ll be all that matters.

What holds this rig back is not speed, but design. The enclosure isn’t as svelte as it seems, yet it also doesn’t offer much room for expansion. The micro-ATX motherboard’s PCI slots are taken up by the video cards, and there’s room four more hard drives, as well as two more memory DIMMs. Not bad, but not in the same league as the Origin Millennium, which can host a whopping 16 internal hard drives.

Competition in the custom PC market is fierce. Over the last few years several manufacturers have introduced exclusive case designs and unique customization options that set their machines apart. The X-Cube is perfectly adequate, but it’s not exciting, and can’t match what the best modern competitors offer.

Topics
Lenovo ThinkPad X1 Fold Gen 2 hands-on review: a sleek redo
AMD Ryzen 5 7600X shows off by beating the Ryzen 9 5950X
Computex 2022: All X670 motherboards announced
Everything we learned about AM5 and X670 at Computex 2022
This Asus gaming laptop is a steal at $600 for Cyber Monday
This 27-inch gaming monitor is $159 for Cyber Monday
This Dell business laptop is $1,563 off for Cyber Monday (seriously)
Asus launches world’s lightest 14-inch laptop with monster battery life
Cyber Monday may be over, but this $99 Chromebook deal isn’t
Time is running out to get the Dell XPS 13 for under $750
This $100 Windows Cyber Monday laptop deal is still available
This trick improves the power efficiency of Nvidia’s RTX 4090
Nvidia may be killing some of its most popular GPUs