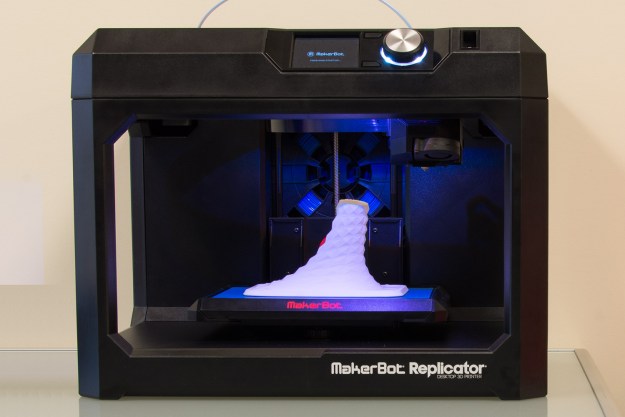 “MakerBot's Replicator is still by far the easiest 3D printer to use.”

As the company that pretty much founded the 3D printing movement, MakerBot is arguably the biggest name in 3D printing.

The company’s flagship printer, the Replicator, has gone through a number of different iterations, and the fifth-generation design is the most advanced one yet. But it’s been a long time since MakerBot was the uncontested king of the 3D printed hill. In recent years, dozens of smaller competitors have sprung up to steal its thunder. In such a crowded market, is MakerBot a good option anymore? We got our hands on one to find out.

Despite being a couple years old, the 5th generation MakerBot Replicator still boasts some of the best specs and features in the biz. The 50 micron max resolution is rather average, but it makes up for it with a delightfully roomy 9.9 x 7.8 x 5.9 inch build area, which allows you to print larger pieces than you’d typically be able to print.

Unfortunately, the Replicator doesn’t have a heated bed or dual extruders, but it does have a few features you won’t find anywhere else — like a built-in network-connected camera that lets you check up on your print via the MakerBot app; and MakerBot’s patented “smart extruder” system that allows you to swap out your hot ends in a hurry. All things considered, the 5th Gen Replicator is still one of the most feature-packed printers you can buy.

Getting the Replicator up and running is a breeze. Straight out of the box, it comes almost completely assembled. All you’ve got to do is plug in the machine, attach the Smart Extruder, and follow the instructions on the screen. MakerBot’s built-in software will guide you through the remaining steps (bed leveling and filament loading), so the whole process is basically foolproof. From start to finish, we had our review unit up and running in less than 10 minutes.

This is what using a 3D printer should be like.

The only step that requires extra effort is connecting the printer to your Wi-Fi network. You can print just fine without doing this, but it’s necessary if you want to monitor your prints from the MakerBot mobile app (which is super convenient). In order to do this, you’ll need to connect your PC to the printer for a few minutes, but just like before, MakerBot walks you through the whole thing on its built-in LCD screen, so it’s really not too difficult.

Functional design with a smart extruder

While the build quality is definitely pretty good (it’s plastic, but solid), the printer’s overall design is where it really shines. This is the 5th iteration of MakerBot’s Replicator machine, so the company has had a lot of time to iron out all the kinks. The result is a one of the best designed, user-friendly 3D printers we’ve ever encountered.

First and foremost, there’s the top-mounted control panel. It might not seem like a big deal, but placing the controls on the top instead of the bottom is a game changer in terms of usability. No more bending over and squinting at a tiny LCD screen; MakerBot intentionally designed this latest Replicator with a big, bright, and upward-facing display — so you can actually stand up comfortably while you fiddle with settings. It’s lovely.

Second, there’s the magnetically attached “Smart Extruder.” It’s not without it’s flaws (prone to clogging) but its shortcomings are vastly outnumbered by its virtues. First of all, the quick-detach design allows you to easily remove the extruder for troubleshooting purposes — something that typically requires a lot of screwdrivers and careful disassembly. Second, it also has a boatload of internal sensors that help detect filament problems before they ruin your print. Sometimes this leads to annoying stoppages, but in the grand scheme of things, paused prints are far better than misprinted parts, so in this reviewer’s opinion, it’s a welcome annoyance.

And last but not least, there’s the network connectivity and remote monitoring via the built-in camera. This is an excellent addition, and to be quite honest, it’s one that more printers should offer. If the Smart Extruder detects an issue and pauses your print, you’ll instantly receive a notification on your phone. This functionality greatly reduces downtime, and helps you stay in the loop with what your printer is doing even when you’re miles away.

The MakerBot’s great design doesn’t end at hardware, either. The accompanying software (onboard, desktop, and mobile) is nothing short of excellent. Here’s why:

3D printing is a complicated process, so naturally, pretty much every 3D printer manufacturer attempts to make it as simple as possible for the end user. But not every company goes about achieving this in the same way.

A lot of companies simplify the printing experience by stripping away options. For example, the less-than-stellar Buccaneer printer from Pirate 3D only gives you three different resolution settings (high, medium, or low), and doesn’t allow you to change things like extrusion speed, infill density, or extrusion temperature. This lack of access makes it easier to use, but it also limits what you can do with the printer in a big way. It’s basically the lazy way to make a printer “user friendly.”

The difference between good and bad printing companies is that the good ones simplify the printing experience not by stripping away features and functionality, but by taking those features and making them easier to access and manipulate — which is exactly what MakerBot has done. MakerWare gives you complete access to the machine’s functions, and it’s designed in such a way that using and adjusting those functions isn’t the least bit difficult or confusing. In fact, it’s simple and intuitive. The onboard software is easy enough for a child to use, and the desktop software isn’t much harder. Truth be told, MakerWare is probably the simplest full-featured slicer program I’ve ever used. Unfortunately, it’s not open source, but it’s definitely on par with Cura and other popular slicers in terms of usability and ease of access to advanced features.

The only thing we didn’t like about the whole experience was the Replicator’s frustratingly slow filament-swapping process. When you initiate the removal sequence, the printer will heat up the extruder to 180 degrees to make the filament come free more easily — but for some reason, once you’ve removed it, the extruder immediately begins cooling down. By the time you’ve attached a new spool and fed the filament through the guide tube, it’s usually around 20-30 degrees cooler, and you have to wait for it to heat up again in order to insert the new filament. It’s completely and utterly annoying — but in all fairness, this quirk is just one negative in a sea of positives, so it’s easy to forgive MakerBot for the inconvenience.

When it comes to printing parts, MakerBot ranks among the best we’ve seen from an FDM printer. It certainly has its fair share of flaws and shortcomings, but once you’ve got it up and running smoothly, it’s a reliable and consistent machine. Its maximum resolution and dimensional accuracy are were both pretty average, but the machine scored high marks in just about every other aspect of printing.

You’ll be hard pressed to find a machine that’s easier to work with.

For starters, the Replicator is pretty damn quick when you need it to be. There’s always going to be a “time vs. quality” tradeoff with any 3D printer you use, but the great thing about this machine is that MakerBot gives you full control over things like extrusion speed, travel speed, layer height and much more — so you can choose which side of the time/quality spectrum to favor. The Replicator can do high-ish resolution (50 micron) prints if you don’t mind waiting, but can also spit out parts at a blistering pace if you’re only after low- or mid-quality resolution. The 400 micron max layer height makes short work of big pieces, and helps you print large parts in a day. Makerware also lets you specify the infill style (honeycomb, lattice, grid, etc), which has a big impact on print speed.

Resolution and dimensional accuracy were fairly average by all accounts, but the Replicator performed admirably in a lot of other areas. Based on how clean and beautiful our benchmark prints came out, the Replicator handles things like overhangs, unsupported spans, and fine details better than most other printers we’ve tested. Most prints come out with very few burrs or imperfections, even when they’re highly technical and complex.

Another thing we really appreciated was how the MakerBot handles rafts. If you’re not familiar, a raft is a special support structure that’s deposited underneath a model to prevent warping and ease release from the print bed. Because the Replicator isn’t equipped with a heated bed, larger parts are prone to warping and must be printed with a raft. Different printers build rafts of varying quality, but MakerBot’s are easily the best I’ve ever seen. They require extra filament, but they make parts ridiculously easy to remove from the print bed, and leave little or no artifacts after they’re separated from the printed part. That’s not usually the case.

We did encounter one big issue while printing. For the first week or so of testing, we couldn’t get the Replicator to print a part from start to finish without experiencing multiple filament jams. These can happen if the extruder isn’t allowed to cool properly and hard plastic gets lodged in the nozzle, or (as we discovered) if the filament gets tangled on the spool. These jams were incredibly annoying, but after a few visits to the MakerBot user forums, we managed to stop them, and our MakerBot has now been jam-free for two entire spools of PLA. It’s also worth mentioning that MakerBot’s smart software alerted us to the problem every time, so at least we knew right away when something went wrong.

The Replicator also scores high marks in the maintenance department. Mostly, this is thanks to the quick-release Smart Extruder, but other features — such as pseudo-automated bed leveling and downloadable system logs — really round out the package and make the machine easy to keep in good working order. If you ever run into an issue you can’t figure out on your own, you can always head over to the MakerBot User Forums and tap into the knowledge of the company’s massive user base.

Repairability and upgradability aren’t as robust as we’d like them to be, but MakerBot does offer a year of MakerCare support with each machine it sells, so if anything goes wrong in the first year, you can just ship your machine in to have it fixed. Plus, once that coverage runs out, pretty much every major component for the machine can be found and ordered online.

Despite the fact that it’s a couple years old, MakerBot’s 5th Gen Replicator is still one of the best 3D printers you can buy right now. It doesn’t have the highest print resolution in the world, and it’s prone to the occasional filament jam — but the Replicator’s super-polished software and myriad smart features make up for those shortcomings multiple times over. The overall printing experience is about as seamless as it gets, and you’ll be hard pressed to find a machine that’s easier to work with. Competitors should take note; this is what using a 3D printer should be like.