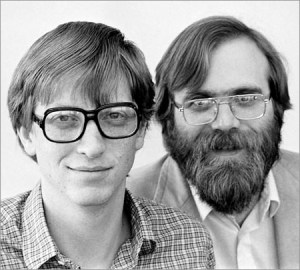 Bill Gates may be the world’s most giving philanthropist, but he’s not always been so charitable, even with his close friends — at least according to a new memoir by Microsoft co-founder Paul Allen.

In the book, entitled “Idea Man: A Memoir by the Co-founder of Microsoft,” Allen offers a “revisionist take” on the early days of Microsoft, reports the Wall Street Journal. Allen’s side of the story paints Gates, who is known as a friend of Allen’s, as a merciless taskmaster, a trait that pointedly clashed with Allen’s more laid-back business style.

Allen also says that, in 1982, Gates and Microsoft’s now-CEO Steve Ballmer discussed liquidating Allen’s shares in the company after he took on fewer responsibilities due to contracting Hodgkin’s disease.

According to the book, Allen overheard the conversation taking place in Gates’ office, and burst through the door to break up the discussion. Allen says both Gates and Ballmer later apologized for their greedy plan.

“I had helped start the company and was still an active member of management, though limited by my illness, and now my partner and my colleague were scheming to rip me off,” writes Allen in the book. “It was mercenary opportunism, plain and simple.”

This plan to push Allen out of the company follows two instances described in the book when Gates succeeded in acquiring a greater portion of their growing company. In the mid-1970s, Gates convinced Allen to give split Microsoft 60-40, giving Gates greater ownership due to his higher level of contributions in the form of software creation.

A few years later, Gates got Allen to agree to a 64-36 split. Allen says Gates later refused an increase to his shares in the company after a successful product launch for which Allen played a key role.

“In that moment, something died for me,” Allen writes. “I’d thought that our partnership was based on fairness, but now I saw that Bill’s self-interest overrode all other considerations. My partner was out to grab as much of the pie as possible and hold on to it, and that was something I could not accept.”

Not surprisingly, the book is making waves in the exclusive circle of people who helped build Microsoft during its earliest days. Some say, that Allen’s account is not entirely accurate, with Allen taking credit for certain things that he didn’t actually do.

That’s not to say its an inaccurate portrayal, however. Like many partnerships in the tech world that lead to massively successful companies, one person becomes the star, and the other falls to the wayside. For instance, this happened with Apple CEO Steve Jobs and his co-founder Steve Wozniak, as well as Facebook’s Mark Zuckerberg and co-founder Eduardo Saverin.

Of course, it’s entirely possible that Allen is stretching the truth to sell books. But remember: Nobody ever becomes the richest person in the world by being too nice.

Read an excerpt of the upcoming book, which hits stores April 17, at Vanity Fair here.

Topics
Trends with Benefits: New Apple MacBooks, Microsoft unveils the Surface Studio
Preview build of the new Microsoft Paint leaks to the internet
Unfortunately, Microsoft did not just tease a black Surface Book 2
Microsoft unleashes more new firmware, drivers for the Surface Book and Surface Pro 4
New AMD laptop CPU destroys its predecessor, winning by 90%
Lenovo is practically giving away this 2-in-1 Chromebook today
This micro-LED advancement is exactly what AR and VR needs
An AI-generated TV channel is mimicking ’90s sitcoms to nightmarish effect
LastPass vs. 1Password: should you switch?
How to overclock Intel’s Arc GPUs for better performance
I asked AI to recreate the best Super Bowl commercials — to hilarious and horrifying effect
Samsung’s crazy rotating 4K gaming monitor is $700 off today
Best Lenovo Laptop Deals: Save up to $2,287 today