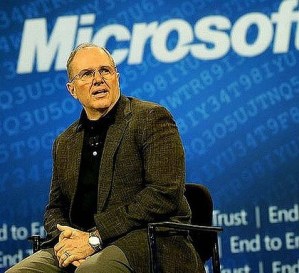 Microsoft has reason to be weary of tablets. Ten years ago, the company made a big bet on them and lost. Then Apple came along last year and completely reinvented the category, making tablets all the rage overnight. Speaking rather honestly at a lunch in Sydney, Australia earlier today, Microsoft’s global chief research and strategy office, Craig Mundie questioned whether the fevered excitement over tablets will last.

The Sydney Morning Herald recorded Mundie’s comments at the Committee for Economic Development of Australia (CEDA).

When asked about the state of the computing world today, Mundie replied as a research and strategy officer should: with an intriguing and self-reflective answer.

“You know, they say, what’s going to happen to all these devices and what are the predominant ones? I think that the phone, the smartphone, as it emerges more, will become your most personal computer,” said Mundie, who then discussed the role of the laptop and how the two overlap. “There’s also going to be an obvious place, that’s sort of today is where the laptop lives that I call the portable desk. I think there’s an important distinction — and frankly one that we at Microsoft didn’t jump on fast enough — between mobile and portable, where mobile is something that you want to use while you’re moving and portable is something you move and then use. These are going to bump into one another a little bit and so today you can see tablets and pads and other things that are just starting to live in the space in between. Personally, I don’t know whether I believe that space will be a persistent one or not.”

As he continued, Mundie moved on to specifically discuss tablets and a new technology that allows mobile devices to have screens that appear as large as an HDTV, using technology that scans the retina much like the eye control technology we saw a few weeks back.

“There’s even people working on technologies where if you look at your cell phone, instead of just seeing a screen of normal type, the thing can actually beam individual rays of light into your eyes right on your retina and you can make the screen appear to be as big as you want, so you can look at your phone and you see HDTV. At a research level these things are being done today. There’s no reason to believe that they won’t happen. So I don’t know whether the big screen tablet pad category is going to remain with us or not when you have more natural interaction.”

Finally, Mundie questioned tablets because of their primary use as consumption devices: “Thing is today those things are being primarily used in a consumptive model because they’re not very good for creating stuff. So I don’t know whether consumptive things will remain a category by themselves or not.”

He may be right, but we’re sincerely hoping that Microsoft plans on hedging its bets in the near future. There is potential for creative uses for tablets too (we’ve already begun to see video editing and music creation), but he’s right that, for the most part, tablets are used for content consumption at this time. It is pretty hard to type on them.

Nevertheless, whether or not tablets are here to stay, like netbooks, they are here now and they need to run on somebody’s operating system. Microsoft is already lagging behind in the smartphone race, it can’t afford to be years behind the competition in more categories. Still, he seems like a bright guy. Hopefully he’s read our wishlist for Windows 8.

Microsoft Surface Laptop 5: Everything we know so far