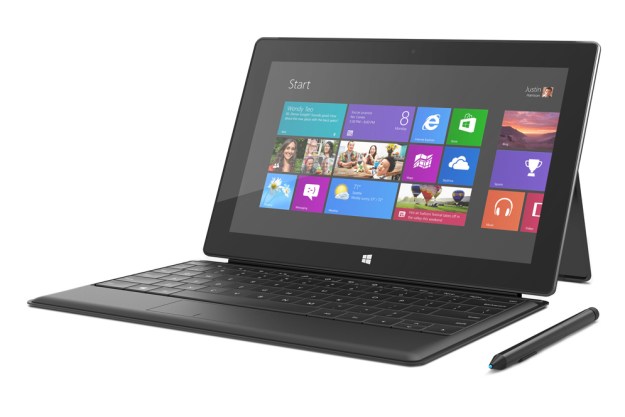 “Microsoft’s Surface Pro fails to solve any problem for any user.”

Don’t be fooled by Microsoft’s stodgy reputation. The company is an innovator willing to take huge risks on its most popular products. Vista, Xbox, Office’s ribbon interface, Kinect – all of these were huge risks that (eventually) paid off. Now, Microsoft is facing its greatest manufacturing challenge since the launch of the first Xbox console with its attempt to become a player in computer hardware.

First came the Surface RT, a small and inexpensive tablet that received mixed reviews; and now, the Pro. Though short for “professional,” the “Pro” moniker may as well stand in for “real PC.” Unlike the ARM-powered RT, our review unit was equipped with an Intel Core i5-3317U processor, 4GB of RAM, and a 64GB hard drive. Pricing starts at $899 but with the Type Cover, the final sum is $1,030.

Both the pricing and hardware appear competitive with a typical Ultrabook, yet the Surface Pro is anything but. The stand isn’t designed for use on a lap, so this isn’t a convertible. Instead it’s a tablet that can transform into a portable all-in-one. Can this unusual hybrid provide a real alternative to Ultrabooks and tablets?

The Surface Pro is a thick device for a tablet, so Microsoft’s designers attempted to compensate with a tapered edge that makes it feel more svelte. The trick works, yet results in pointed edges at each corner. We found these points digging into our palms after just a few minutes of use – a problem that isn’t helped by the tablet’s hefty two-pound weight.

Button placement is another ergonomic issue. Both power and volume are placed for quick access when the tablet is held in landscape orientation. However, when in portrait mode, the buttons are entirely in the wrong place. Depending on how the device is flipped, you’ll find the volume buttons in your lap or the power button under the top of your palm.

At least the Surface is a looker. Though lacking flash, the device has a solid, mature vibe. Microsoft has hinted the Pro is a valid choice for enterprise, and it looks the part. Placed in a conference room next to Lenovo’s ThinkPads, most users would hardly notice the Surface tablet. The comparison holds up after extended use thanks to the tablet’s excellent material quality and sturdy construction. Even the thin stand snaps into place with a definitive thunk. (But don’t even think about taking apart the Surface.)

As its TV ads suggest, the Surface is geared towards professionals; and a machine intended for this audience usually goes hand-in-hand with excellent connectivity. Unfortunately, that isn’t the case with the Surface Pro. Instead, users are left to rely on a single USB 3.0 port, a lone audio jack, a Mini DisplayPort, and VGA (via an adapter). Anyone who wants to use an external keyboard and mouse will have to make sure at least one relies on Bluetooth instead of a USB dongle.

Finger or stylus? Why not both?

The Surface Pro is a tablet, and that means it has a touchscreen. The fact that it offers 10-point multitouch is notable only because the Surface RT does not, and almost every competitor serves up the same. Touch input was responsive and quick, but no more so than any modern tablet.

… where do you put the stylus when you’re charging the device?

Though Microsoft built Windows 8 with touch in mind, most programs were developed for the mouse. Microsoft apparently became aware of this problem during the Surface Pro’s development and decided to solve the issue with a capacitive stylus. We found the stylus mostly up to the task of handling fine-grain interface elements that are too small to be easily manipulated via touch.

Technically, the Surface Pro doesn’t come with a keyboard. Owners can also order the Touch Cover, which lacks mechanical keys, or the Type Cover, which has them. We grabbed the latter.

Microsoft seems to have benchmarked netbooks when designing the Type Cover. Space is at a premium in every direction. The primary alphanumeric keys are of reasonable size, but cramming them in forced Microsoft to reduce the gap between each key and the size of some secondary keys like Caps and Shift. All of this results in a cramped experience.

That’s not the only problem. Tactile response is limited, which makes touch-typing a chore. The keyboard layout runs against some laptop conventions. For example, it lacks a left-side function shortcut key, and there isn’t a way to control display brightness. Yet, the keyboard does include volume controls. Why? The tablet already has a volume rocker on it. Wouldn’t it make more sense to include brightness controls instead?

As for the touchpad, it’s hopeless. By our measurements, it comes in at about 2.5 inches wide by 1.5 inches tall, making it the smallest touchpad we’ve ever used. Integrated left/right mouse buttons are included, though seemingly only as an afterthought.

All these flaws might be tolerable if the Type Cover sold for $50. Instead, Microsoft has priced it at a jaw-dropping $130. That’s an outrageous sum for a bad Bluetooth keyboard with felt glued to the bottom.

Sharp, but not beautiful

Microsoft packed a 1080p display in the 10.6-inch Surface Pro, which is what we’d expect from a device this expensive. At a glance, fine text rendered smoothly and high-resolution video appeared perfectly clear. However, testing revealed some issues.

The color gamut is a measly 69 percent of sRGB, overall contrast is low relative to other high-end tablets and laptops, and black levels aren’t deep when the display is at or near maximum brightness. All of these factors contribute to image quality that’s good enough, but obviously lacking the rich, vibrant look found on Apple’s iPad or Dell’s XPS 13. Even Acer’s Iconia W700 turned in slightly better results.

The Surface does boast one great strength, however: brightness. When turned up to 10, this tablet is more brilliant than any device we’ve tested in the last six months. Nothing else comes close.

Like Acer’s Iconia tablet, the Surface suffers from scaling issues. Most Metro-derived design elements displayed well, but the desktop environment is finicky, jagged, and annoyingly small. Some apps scale poorly and looked blurry as a result.

Audio quality is acceptable, though lacking in volume. Even an iPhone 5 can produce more sound, albeit at the expense of distortion not found on the Surface. Anyone planning to use this tablet in an area with noticeable ambient noise will need to bring a pair of external speakers or headphones.

Endurance is another area where the Surface Pro comes up short. It managed 1 hour and 46 minutes during the Battery Eater load test and 5 hours 51 minutes in the light-load Reader’s Test. We believe users could realistically squeeze in another hour in a pinch (we don’t test at minimum brightness and, unlike most tablets, low brightness is usable on the Pro).

Endurance is another area where the Surface Pro comes up short.

Still, even a run time of nearly seven hours would be a bit disappointing. Dell’s convertible XPS 12 lasted almost nine hours in the Reader’s Test, while the Acer Iconia W700 and Lenovo ThinkPad Tablet 2 both managed around 8.5 hours. Microsoft is behind the curve.

Our power tests show that consumption isn’t the culprit. The Pro drains 9 watts of juice at idle with the display at 50 percent, which goes up to just 10 watts when the display is at 100 percent. Stress tests pegged the dial at no more than 25 watts. Instead, battery size is the issue. The Pro comes with just a 43Wh unit, which is smaller than the 54Wh unit Acer crams in the Iconia W700.

The Surface Pro’s Core i5-3317U is the processor most popular among Ultrabooks, which means this tablet offers Ultrabook performance. SiSoft Sandra’s Processor Arithmetic test turned in a combined score of 38 GOPS and 7-Zip recorded a total of 7,396. Both numbers are on par with competitors that have the same hardware.

PCMark 7 turned in a strong score of 4,705, which is a great result for any mobile device, let alone a 10.6-inch tablet. Good processor performance combined with a blazing fast solid-state drive made the score possible. There is a downside, however. After installing benchmarks and one game (Diablo 3) the speedy 64GB solid-state drive was left with just 11.9 GB of free space. Most users will find that far too little.

The Pro’s Intel HD 4000 graphics solution served up a 3DMark CloudGate score of 3,335 and a FireStrike score of 480. Both scores are low relative to what a typical discrete graphics solution can offer, but that’s also not a fair comparison, as no Intel-powered tablet on the market today is sold with anything other than Intel integrated graphics. 3D games can be played on the Pro as long as detail is kept at low or medium and in-game resolution is reduced to 1366 x 768.

A bit hot, a bit loud

During our tests, we noticed little disturbance from the Surface Pro. At idle, its fan, though barely audible, did not exceed ambient noise on our decibel reader. Straining the processor increased noise to 40.8 decibels, and running the Furmark graphics stress test pegged the volume at 45.8 decibels. All of these figures are average for the Ultrabook category.

Temperature testing recorded a maximum reading of just 81.9 degrees Fahrenheit when the system was left at idle, but this increased to 107.4 degrees after our graphics test. That warmth is noticeable and borders on uncomfortable, but even ARM-powered tablets like the iPad and Nexus 7 become toasty when playing 3D games, so these results aren’t unusual.

Our perception is spoiled only by the Acer Iconia W700 tablet, which never exceeded 42.9 decibels in our sound testing and never warmed beyond 94.1 degrees. Both figures put Microsoft’s tablet to shame.

Microsoft’s Surface Pro is a bold move. By jumping into the tablet business, the company is attempting to counter the “post-PC” era by guiding consumers towards a future where PCs are different, but still dominated by Windows. We think the idea is sound. The finished product? Not so much.

… it fails to solve any problem for any user.

There’s little to like about the Pro. The display is good but not exceptional, connectivity is poor, design is ho-hum, ergonomics is an issue, performance is average, and battery life is below par. We do think the Pro’s well built and quick enough for most users, but the same can be said of almost every Ultrabook and convertible on the market today.

While the Pro is small, form factor can’t be entirely blamed for its woes. Acer’s Iconia W700, which offers a slightly larger 11.6-inch display, beats the Surface in many categories. Battery life, display quality, connectivity, heat, and noise – all of these battles are won by the Iconia. And then Acer rubs dirt in Microsoft’s wound by selling the 64GB version, with keyboard and dock in the box, for $790 online. Ouch!

We see no reason why the Surface Pro can’t work in theory, but, as currently sold, it fails to solve any problem for any user. The device’s high price is only the final nail in a coffin already strapped, wielded, and chained shut.