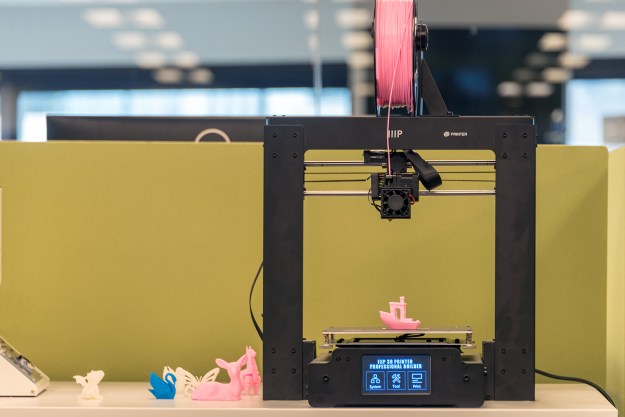 Monoprice is crushing the 3D printer game right now. Over the past couple years, the company has released a handful of printers that are not only extremely affordable, but also packed with high-end features that you typically can’t find on such inexpensive machines.

Perhaps the best example of this is the company’s $160 Mini Delta printer, which earned high marks in our review despite its outrageously low price point. Thing is, the Mini Delta is on the lowest end of the price spectrum when it comes to Monoprice 3D printers — so we got our hands on a $400 Monoprice Maker Select to see how it compares. Luckily, we weren’t disappointed.

The Maker Select Plus boasts an impressive set of features, and arguably the most significant one is its spacious 7.9″ x 7.9″ x 7.1″ build area. While this isn’t the biggest print envelope we’ve ever encountered, it’s much larger than what we’ve seen on other machines at similar prices. As an added bonus, the print bed is also heated, which boosts adhesion and helps prevent print warping.

In terms of print quality, the Maker Select Plus punches way above its weight class

The printer’s 100 micron (0.1mm) minimum layer height puts it squarely in the middle of the pack in terms of resolution, but it makes up for that with an absolutely massive range of material compatibility. The Maker Select Plus supports almost any type of filament that you can get your hands on, from ABS and PLA, to some stranger filaments like Jelly and Felty. This greatly expands the range of objects you can make with your printer.

To top off this already impressive package, the MP Maker Select Plus also features a built-in touchscreen LCD panel in lieu of a dial or physical buttons. This is practically unheard of on any printer under $500.

Out of the box, the Select Plus comes almost completely assembled — but not quite. The machine comes out of its packaging as two major parts that require four screws and some plugging in to come together. Thankfully, there’s a great manual to guide the setup process, and a handy accessories bag filled with all the fasteners and tools you need to get the job done.

After assembling the two pieces, it sets up like any other FDM printer: Plug it in, run the plate leveling wizard (also included is a super handy business card-sized leveling guide for the 1mm test), and get the included filament loaded up. After that, you’re ready to print.

Building on the great qualities of Monoprice’s Maker Select design, the Maker Select Plus has an all-metal body and Prusa i3-inspired design — but with an all-in-one form factor that folds a 3.25 inch touch screen directly into the machine’s front. After dealing with so many knob driven controls on other printers, the simplicity of this printer’s touchscreen was incredibly refreshing.

The Select Plus also doesn’t take up much space, and runs more quietly than almost any other FDM printer we’ve tried — which means you don’t necessarily have to hide it in your garage just to isolate the noise. You also won’t need to visit your garage if you need to work on it, as the MP Select Plus is extremely accessible and easy to repair. The included accessory bag even includes a few replacement parts for things that you’ll likely need to fix after a couple years, like the teflon tube inside the print head.

Running the Select Plus out of the box is one of the best first-time setups we’ve had, and that’s largely thanks to its simple interface. After putting it together, a satisfying click of the power switch brings the touchscreen online.

The printer’s touchscreen is a feature that we didn’t realise that we wanted until we had it. Deviating from the knob style control scheme is the best thing that Monoprice could have done, as it removes the monotony of navigating menus.

When it comes to slicing software, Monoprice takes an approach that not many manufacturers do. Rather than forcing you to install a proprietary slicing program, Monoprice ships its printers with config profiles for the popular open source slicer, Cura. This is great, because Cura is arguably one of the best slicers in existence, and it’s well-suited for users of all experience levels.

If Cura isn’t your bag, the Select Plus also supports many other open source and commercial slicers, so no matter what program you’re used to working with, you can likely get this machine to play nicely with it.

The first print we ran was a swan: one of the four models that came pre-loaded onto the printer’s SD card. It came out almost flawless, but that was what we expected. Oftentimes, companies will pre-load highly-optimized test prints onto their machines to show off a printer’s abilities, and for this reason these objects aren’t necessarily a good indicator of overall performance. So for our next print, we ran a standard 3DBenchy: a tugboat-shaped torture test designed to tease out a printer’s strengths and weaknesses.

Much to our delight, the tugboat came out just as clean and accurate as the pre-loaded swan had. The fine details on the Benchy’s bottom and stern came through astonishingly well, and tricky elements like spans and overhangs were executed perfectly. We did notice a few vertical striations the boat’s cabin, but concluded that they were most likely slicing artefacts caused by the printer’s software, not a flaw in its hardware.

In terms of print quality, the Maker Select Plus punches way above its weight class, but print quality alone does not a good printer make. Luckily, this machine is also quite reliable. After testing a few duds in the past few weeks, we were relieved to find that this machine has a very low failure rate. You can just queue up a model, hit print, and walk away without worrying that it’s going to mess up on the first layer and waste a bunch of plastic — which we really appreciate.

This printer checks all the right boxes. It’s cheap, it’s well-built, it has a large build envelope, it has a heated bed, it works with tons of materials, it has intuitive software, it prints like a dream, it’s super reliable, and it costs just $400. It’s certainly not perfect, but no other printer on the market will get you this much bang for so few bucks.

If what you’re looking for is the highest print quality possible, you can get better results from an Ultimaker 3 or a Formlabs Form 2. Both printers offer considerably higher maximum resolutions, and are capable of printing with more detail than the Select Plus. That said, both cost over $3,000.

If what you’re looking for is build volume and the ability to print large parts, then you’d be better off with a Lulzbot Taz 6 or any Ultimaker machine. There are plenty of printers out there that have larger build envelopes than the Maker Select Plus — but again, they’re almost all over $2,500.

If you’re shopping on a tight budget, Monoprice offers other printers (like the Mini Delta and the Maker Select V2) that cost even less than the Select Plus. Just keep in mind that these machines have far smaller build envelopes and are therefore limited in what they can create.

So while the Select Plus doesn’t have the best print quality or the biggest build envelope or the lowest price tag you could possibly get on a printer, it does offer one of the best combinations of quality, size, and price that we’ve ever seen in a 3D printer.

It’s worth noting, though, that you can also opt for the non-premium Maker Select ($300), which is essentially the same printer, but with slower print speeds and without the built-in touchscreen.

With proper maintenance, this printer should last a long, long time. Thanks to its all-metal construction, durable components, broad software compatibility, and regular firmware updates from Monoprice; this printer should keep on chugging along for years to come.

Absolutely. If you’ve been holding off on buying a 3D printer due to high prices, or are tired of that Makerbot you bought four years ago and are looking for something more reliable, this is the printer you’ve been waiting for.

Topics
Watch Meta demonstrate full-body VR tracking with just a Quest headset
AMD might deal a huge blow to Intel with new 3D V-Cache CPUs
AMD is bringing 3D V-Cache back to Ryzen 7000 — but there’s a twist
Acer launches eye-popping displays with built-in 3D tech
The 6 biggest problems with ChatGPT right now
Pro users are already unhappy with the upcoming Mac Pro
How to schedule an email in Outlook
15 years later, the MacBook Air could soon have its best year ever
How to watch Super Bowl 2023 on your computer
Microsoft Word vs. Google Docs
Turns out DirectStorage isn’t killing frame rates in Forspoken after all
Best laptop deals: Save on Apple, Dell, HP and Lenovo
Wi-Fi not working? Here’s how to fix the most common problems