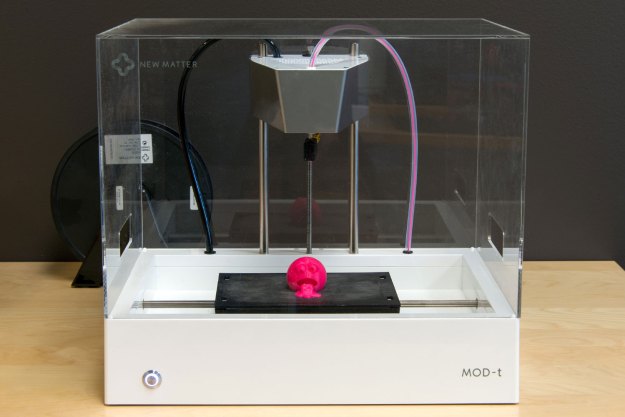 “NewMatter’s Mod-T is amazing in many ways, but too unreliable to recommend.”

The sub-$500 3D Printer category is booming right now, and one of the latest additions to this burgeoning subcategory is the Mod-T from NewMatter. The printer was a massive hit on Indiegogo back in 2014, and now that nearly two years have passed, NewMatter is finally ready to ship the Mod-t out to customers — all for the astonishingly low price of just $399. But can it stand up to more expensive machines in terms of print quality, reliability, and ease of use? We took one for a spin to find out.

For $400, the Mod-T brings a lot to the table. The 6 x 4 x 5 inch build area isn’t huge, but it’s one of the biggest build envelopes you can get for less than $500 without building the printer yourself. Max resolution is 100 microns, and it goes down to 400 when you’re in a hurry and need to pump out parts as quickly as possible.

The real star of the show here (aside from the price, of course) is the printer’s uber-simplified design. There’s no calibration, no bed leveling of any kind, and you can print a wide range of objects with just a single button click. NewMatter set out to build this printer with the novice, non-techy, first-time printer in mind, and the end result is damn near foolproof.

Getting started with the Mod-T is about as simple as it gets. NewMatter has clearly gone the extra mile to make setup a painless process. There’s almost no assembly required, and the printer performs all calibration automatically, so getting your machine up and running only takes a few minutes. As is normally the case with pre-assembled printers, the hardest part of the entire setup process was getting the Mod-T to connect to our Wi-Fi. This requires you to connect a laptop to the machine, but once that’s done the entire experience is untethered and easy as pie.

If there’s one place this printer really shines, it’s in the design department. In addition to the fact that the Mod-t is one of the most aesthetically pleasing 3D printers we’ve ever laid eyes on, it also has some really clever functionality to compliment its form.

The first thing you’ll notice about the printer is the absence of belts. The vast majority of Cartesian FDM printers rely on some kind of belt/gear system to move the hot end around the built plate (or vise versa), but the Mod-t uses a completely different mechanical system to get the same job done. Instead of bets and gears, the printer uses a toothed build plate placed atop two perpendicular pinion rods. As these grooved rods spin, they catch the teeth on the bottom of the build plate and move it in a given direction.

This configuration doesn’t boost accuracy or precision in any major way, but what it does do is simplify the overall design of the printer. Because the pinion rod setup combines the driving force of one axis with the guiding force of another, the Mod-t requires far fewer parts than it otherwise would. This makes it cheaper and easier to manufacture than most other 3D printers, and allows NewMatter to sell the printer for such a low price. Smart stuff!

Unfortunately, the Mod-t isn’t equipped with a heated bed (which aids adhesion and prevents warping) — but it does have the next best thing: a removable, flexible build plate that doesn’t require any kind of manual calibration. When your print is done, you can just pick it up off the bed, pop off the plastic build plate, and flex it back and forth until your print comes loose. No more prying your prints off with a chisel! This configuration does come with a couple drawbacks (more on that in a moment), but the overall idea is very thoughtful and user-friendly.

The Mod-T is designed to work with two different software programs: a desktop application (win/Mac), and a web-based version that you access through the NewMatter website. We used both in order to tease out the strengths and weaknesses of each.

You won’t be able to print anything large with this little guy.

We’ll start with the webapp, which is awesome simply because it’s web-based, and therefore completely OS agnostic. It doesn’t matter if you’re running Windows, Linux, or Mac. If your computer can run a modern web browser, it can run this program. The only downside, of course, is that if you don’t have an internet connection, you’re screwed, and will be forced to use the desktop app and a wired connection to the printer.

If you do have internet access though, NewMatter’s web app is great — especially for beginners. The interface is super minimal and simple to understand, so there’s virtually no learning curve whatsoever. Objects plucked from the company’s curated collection can be sent to the printer with just a single click, and if you’d prefer to supply your own designs, the uploading/slicing process is practically foolproof. It’s seriously hard to make a mistake here.

The downside (as usual) is that this super stripped down interface limits access to advanced features. Basic things (such as adding objects to your library, resizing them, and adjusting resolution) are readily available, but many high-level customization options (such as adjusting infill parameters, extrusion speed, and support structures) are notably absent.

However, NewMatter does have a workaround for more advanced users. If you want more control, you can use the desktop app, which provides allows you to “bring your own gcode” and set custom parameters for how your object is printed. The only catch is that you have to use a separate app to make the gcode, and then import it into the Mod-T software after the fact — which requires a fair bit of technological know-how.

And that’s precisely the problem with NewMatter’s two-program approach: it doesn’t leave any room for intermediate users. If you want to venture beyond the basic settings, you’re forced to dive straight into the big, confusing world of 3D modeling software and do everything the hard way. Overall, we’d say the software interface is a win (especially for beginners) but just a few more intermediate-level customization options would go a long way toward making it better.

The first thing we printed with the Mod-t was an object we found in NewMatter’s curated collection: a 3D pukeface emoji that, in terms of shape, was just a sphere with lips and a stream of barf. The printer handled this with ease, pumping out a nearly flawless object at an admirable pace. After that we printed a triangular ruler, which the Mod-t made short work of. But after these first two prints, we started to wonder — what happens when you venture outside of NewMatter’s walled garden and try to print something that isn’t curated and optimized for the printer?

To find out, we loaded up the lovable little tugboat known as 3DBenchy. This is an object specifically designed to test a printer’s limits, and is usually the first thing we print when we fire up a new printer. For the first 30 minutes, the print went swimmingly — but just before the boat’s hull was finished, disaster struck. The print failed and broke off the print bed for some reason, which resulted in a clump of bizarrely arranged filament strands forming on the print bed.

At first we brushed it off and thought it was just an isolated incident — but much to our chagrin, the print failures kept happening. On our second attempt, some unknown error occurred and made the boat come out looking like avant-garde glitch art. The same thing happened on our third try too — but on the fourth attempt we managed to pinpoint the source of the problem.

As it turns out, the removable print bed isn’t totally secure. It’s designed to clip into the toothed base plate, but it doesn’t actually “clip” at all. It’s really just held in place by pressure and friction, which means that it can gradually slip out a few millimeters if the print doesn’t go perfectly. If the hot end knicks the object during the print process, it can cause the bed to move ever so slightly off its original position. If this happens once or twice, the “glitch art” effect will be minimal, and perhaps not even big enough to ruin the print — but if it happens a lot, the effect can be disastrous.

We managed to fix this issue by applying some duct tape to the build plate, thereby preventing it from wiggling out of place. This helped a lot, and almost completely eliminated the problem of misprints — but it also made separating the build plate from the base a rather cumbersome and annoying process.

Still, regardless of the inconvenience, the printer worked beautifully after our duct tape modifications were installed. Despite not having a heated bed, the Mod-t doesn’t seem to have any significant problems with warping or bed adhesion — something that can’t be said of its similarly-priced competitor, the M3D Micro.

In summary, the speed and resolution of this printer are pretty much exactly what NewMatter promises on the box — but dimensional accuracy and overall reliability are extremely low unless you’ve got a roll of duct tape handy.

Print issues aside, keeping this machine in good working order is a breeze. It’s designed in such a way that it never needs to be leveled or calibrated, which is really the most annoying part of using a 3D printer. The fact that you never have to think about this stuff with the Mod-t is really quite nice.

Hardware upgrades aren’t available quite yet (fingers crossed for a redesigned print plate), but NewMatter pushes out software and firmware updates on a regular basis. This printer will very likely improve over time.

In its current state, the Mod-T is a good printer. Hell, taking the price into account, I’d even call it very good. It’s got a decent build volume, good resolution and speed, and a bunch of thoughtful features that make it easy to use and maintain. But before it can cross over from good to great, NewMatter needs to fix a couple things.

First and foremost, the build plate design needs to be adjusted so that it’s stable and can’t wiggle out of place during the print process. As we mentioned before, this issue can be fixed with a couple strips of tape, but the fact that the Mod-t can’t print reliably without outside help is bothersome.

Second, the printer’s software could use a few additions. Right now it caters exclusively to beginners, and tosses a bone to advanced users with the custom gcode importing — but intermediate users are left out to dry. Adding just a few more customization options (namely, infill settings, travel speed, and rafts) would go a long way in making this printer better.

These two fixes would make the printer drastically more reliable — and reliability is the missing piece of the puzzle right now. At the end of the day, we couldn’t hit “print” on the Mod-T and walk away with complete confidence that the part would come out okay, and until that changes it’s hard to recommend this machine.

Video-editing app LumaFusion to get a Galaxy Tab S8 launch
Best VPN services 2022 — Today’s top picks
Best Adobe Photoshop deals for September 2022
Spellcheckers in Google Chrome could expose your passwords
What is Discord?
Best Apple iMac Deals: Get an Apple desktop for $539
Best Dell XPS Deals: Up to $600 off top-rated laptops
IPVanish Free Trial: Try it for a month, no strings attached
Adobe Free Trial: Try Creative Cloud for free
Why AMD doesn’t need to beat the RTX 4090 to overtake Nvidia
Why the RTX 4080 12GB feels a lot like a rebranded RTX 4070
Microsoft confirms Surface event for October 12, Surface Pro 9 expected
How much does the RTX 4090 cost? RTX 40-series buying guide