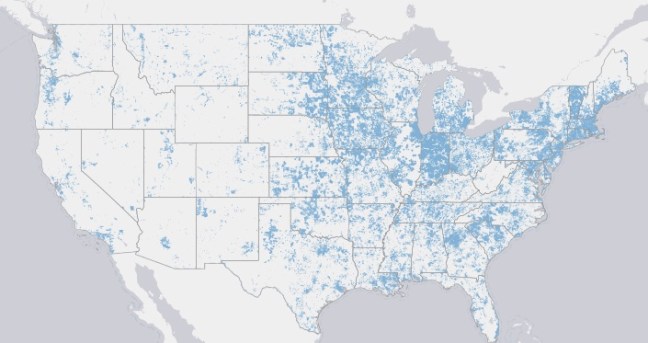 The National Telecommunications and Information Association (NTIA) released the National Broadband Map today. This $200 million project offers public access to a thorough analysis of national broadband availability, and hopes to increase access, especially to “communities at risk of being left behind.”

The NTIA collaborated with the FCC to extract the data, which revealed that 5 to 10 percent of Americans cannot access Internet speeds that would allow incredibly basic Web functions, including downloading images or video chat capability. Only 36 percent of Americans have access to wireless Internet, most using “3G” speeds. The 2010 US Census revealed a shocking amount of disparity when it comes to Internet accessibility, and it’s become a government focus to amend the situation. Just last year, the NTIA determined that 40 percent of Americans went without home broadband connections.

While some of us have been left in the lurch, the map did prove that more Americans have access to the Internet in general than last year – nearly 5 percent more. And you can research all the improvements for yourself with the interactive map. Users aren’t limited to vague stats about broadband accessibility: It allows you to customize your search. You can browse details like broadband options and specific street addresses. According to the Commerce Department, the map will be updated twice a year to include connectivity improvements.

So how did the NTIA pay for this? A good deal came from the 2009 Recovery Act, which specified funds for a national broadband inventory. After deciding to enact a plan to provide broadband service nationwide, the FCC realized it needed to assess where it was unavailable. Now, the data has been laid at our fingertips and the government is working on improving our Internet connection.

Meet Kadaza: A customizable start page and web portal just for you
Upcoming Windows update will kill Internet Explorer for good
Nervous about using public Wi-Fi while you travel? You shouldn’t be. Here’s why
How to extend your Wi-Fi range with another router
New phishing method looks just like the real thing, but it steals your passwords
Best HP Envy deals for October 2022
The new Dell G16 gaming laptop just got a $240 discount
Norton Antivirus Free Trial: Get a week of protection
ABCMouse Free Trial: Get your first month free
Intel Arc A770 16GB vs. A770 8GB vs. Nvidia RTX 3060
Intel Arc A750 vs. Nvidia RTX 3060
Can I use an Intel Arc GPU with AMD Ryzen?
Intel Arc Alchemist: specs, pricing, release date, performance