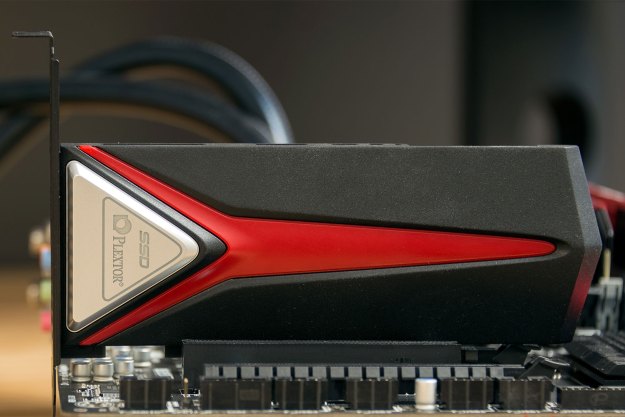 As prices have dropped on solid state drives, the benefits of hard disk drives are quickly waning. Newer SSDs are three to five times faster than HDDs, and modestly sized drives are readily available for under $100. For those seeking even more power, there are NVMe drives, which leverage faster PCIe 3.0 connections to triple speeds once again.

But there’s a problem: to take advantage of the latest, you may need a system upgrade. Most NVMe drives connect over the relatively new M.2 standard, since typical SATA connections aren’t fast enough. A small handful of manufacturers have put time and money into building drives you can install in your PCIe slot, like a GPU.

The Plextor M8Pe reflects that evolution with a sleek heatsink, LED lighting, and the promise of top-end speed. Our review unit is a 256GB model, the kind you might use as a boot drive, or as a second system drive for games and production data you need at a moment’s notice. It sells for $180 on Amazon and most other retailers.

At promised speeds four times that of 2.5-inch SSDs, you’re going to pay a premium for both the form factor and the connection standard. Yet, in spite of that, the Plextor M8Pe ends up a good value.

For better or worse, the M8Pe we received was clad in a red and black heatsink that will fit right in with the gamer-themed components that have taken over the market. This trend isn’t as visible in gaming desktops as it is in laptops, but if you have a fancy color-coordinated battle station, it’s certainly something you’ll want to consider.

There are two LED lights built into the M8Pe, a white light for power on top, and a red light for activity on the side. They fill their diffusers well, but aren’t bright enough to distract from any fancier lights or RGB LEDs. Plextor includes a half-height PCIe adapter bracket for smaller cases, and it only uses the x4 PCIe 3.0 lane, so it doesn’t get in the way of mATX boards with one PCIe x16 slot, and fits in happily alongside multi-GPU configurations.

Not the fastest, but surprisingly close

The Plextor M8Pe flies past even the outrageously priced Intel 750 Series drives in terms of read speeds. It’s important to note that the first three drives in the graph above are NVMe, while the Western Digital Blue SSD is a more typical SATA drive. That should give you an idea of the gap between the two.

However, the Plextor option falls behind in write speeds. Beating on the SATA-based Western Digital Blue SSD. Samsung’s 960 Pro — found in our Digital Storm Velox test system — claims the top spot here, and sits right around the same price point as the Plextor. It’s only available as an M.2 drive, though, so you’ll have to pay $20 for a PCIe adapter if your motherboard lacks built-in compatibility.

Our HDTune benchmark is more demanding, and there the differences between the 750 Series and M8Pe disappear. Once again, Samsung’s 960 Pro takes a noticeable lead, making a strong case for the M.2 form factor moving forward. Access time is the only spot where the 960 Pro falls behind, and the other two drives shine.

Overall, the Plextor M8Pe performs similarly to more expensive drives in all but the most demanding situations, and is one of a just a few offerings at that price, within the form factor. Zotac’s Sonix AiC drive is the only one that promises similar speeds at a lower price point, but good luck finding one for purchase. We also have not reviewed it, so can’t confirm its performance.

Plextor bundles the M8Pe with an impressive five-year warranty. The Intel 750 Series has the same warranty coverage, as does the Samsung 960 Pro. For high-end drives, a long warranty is standard.

Plextor’s M8Pe fills a much-needed spot in the high-end storage upgrade path for systems that are a generation or two behind, but still relevant. Its read speeds are among the best we’ve seen, and its write speeds are competitive, making it a solid option if you can find the 256GB model for $180 or so.

There’s a wide variety of options in the SSD market, but very few in the PCIe form factor — most of them are 2.5-inch SATA drives, or us the newer M.2 connection. If you’re on an older motherboard, the Plextor may be the only way to achieve cutting-edge performance. Intel’s insanely expensive 750 Series is the prime alternative, and it performs well in all situations, but the Plextor drive seems a better value.

While NVMe SSDs are basically the bleeding edge of what’s available right now, Intel’s Optane system is lurking right around the corner. Compared to these, the Plextor may seem a little old-fashioned, but its strong performance means it should be relevant for years.

Yes, if you have an older PC you’re looking to spruce up with even faster storage. Popular chips like the Core i7-4790K still power impressive gaming rigs, but their motherboards lack the M.2 slots needed for the very latest drive. The Plextor M8Pe is an affordable compromise that brings cutting-edge speed to the masses.