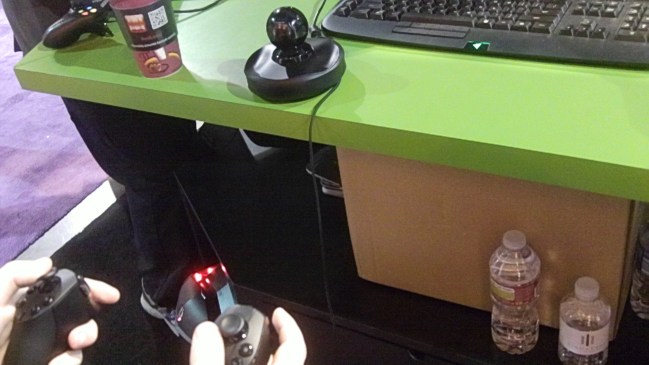 Joining the crowded ranks of the Nintendo Wii’s nunchucks, Sony’s PlayStation Move and Microsoft’s Kinect, Razer has announced that the PC will also be receiving a set of motion based controls, called the Hydra.

Debuted at CES, the Hydra offers a similar experience to its motion control competitors, but does so in a unique way. In movements, the Hydra is similar to the PlayStation Move, while the actual controls are reminiscent of the Wii’s nunchuck. But it really is something different altogether.

The Hydra consists of two handheld controls that are wired and connected to a small electromagnetic field generator that is meant to be placed near the monitor. When the user moves the sticks, it disrupts the magnetic field and recreates the movement in the game. And while the wires might sound odd considering the overall move to wireless everything, it offers a more precise gaming experience that can deliver better controls. It also cuts down on the distance from the monitor that you need to stand.

The game being displayed for the Hydra was Portal 2, which will include a series of Hydra-only levels when it is released later this year. Left 4 Dead 2 was also mentioned as a compatible game, but all other titles are being kept under wraps.

The Hydra is just one of many debuts that Razer dropped on us at CES. The peripheral maker changed their game to include Xbox devices, and wowed us all with the Switchblade mobile gaming PC.

Topics
Cooler Master’s Orb X gaming pod is futuristic and utterly absurd
Today’s best deals: TVs, laptops, iPads, robot vacuums and more
The best GPU benchmarking software
How to post a Short on YouTube
How to use the new communities feature in Microsoft Teams
The best gifts for PC gamers
Google is now supporting my awful browser habits, and I love it
Google just revealed what you found most fascinating in 2022
Even 15-inch portable monitors come in OLED now
How to reset graphics drivers in Windows 11
The most common multi-monitor problems and how to fix them
Upcoming MacBook Pro could have a 20-inch folding display
This Alienware gaming laptop with an RTX 3080 is $650 off today