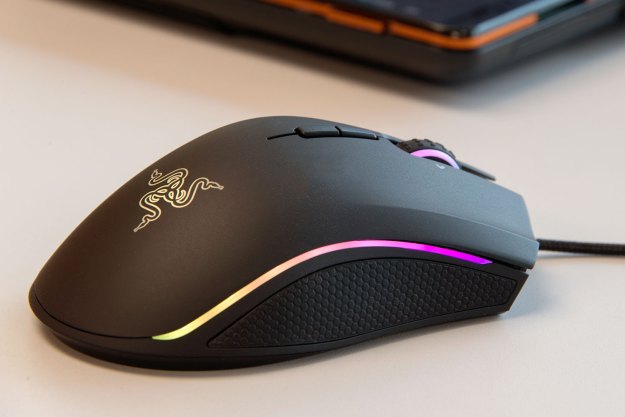 “The Mamba Tournament Edition is a fantastic choice for wired-in gamers.”

The Razer Mamba Tournament Edition occupies an interesting place in the company’s wide lineup of gaming mice. As a wired-only version of the Mamba it’s a step down from the pricey flagship. But its feature set puts it well above the more pedestrian Deathadder Chroma, which has a near-identical ergonomic body design but a less-sensitive optical sensor and no on-the-fly DPI switching. In terms of price, it sits between them at $90 — expensive for a mouse, especially a wired one, but not unheard of for a gaming-specific design.

As a value proposition, the Mamba Tournament Edition is a way for gamers to get Razer’s top-of-the-line laser sensor without springing for the $150 wireless version of the Mamba. It’s also a somewhat flamboyant accessory thanks to full compatibility with Razer’s Chroma RGB lighting system. Whether it’s actually useful or relevant to your particular gaming style depends on a great many variables. Let’s sort through them.

The design of the Mamba Tournament Edition is inherited from Razer’s older Deathadder line. It’s a right-hand-only mouse with large and forgiving primary buttons, plus two big and comfy thumb buttons on the left edge for secondary gaming actions. They default to forward and back in most browsers, but serious gamers will customize them for each title they play. There are two smaller vertical buttons just beneath the scroll wheel for raising or lowering the laser sensor’s sensitivity on the fly.

The wheel should be familiar to most PC users. It’s a simple design with a single center-click and without the adjustable speed scrolling seen on more elaborate desktop mice. That’s ok. PC gamers want standard stepped scrolling for accurate switching between weapons or zooming in and out of the battlefield.

The wheel does have a new trick over older Mamba and Deathadder designs. It can click to either the left or the right to “scroll” along the X axis. That isn’t particularly useful in-game thanks to the somewhat awkward application of force, but it’s handy for large websites or spreadsheets.

If you want Razer’s best sensor for less, this mouse should be your choice.

The scroll wheel is wide and covered in a ribbed, rubbery texture to make it easy to find and manipulate. Even in intense first-person shooters I never had problems hitting either the front or back mouse buttons. The DPI adjustment buttons are placed intelligently. They’re unlikely to be triggered by an errant fingertip, but easy to find and activate once you need them.

In terms of ergonomics, the mouse is large, long, and light. Thanks to the huge mouse buttons, the generous vertical curve of the case, and the plastic on top and textured sides, the Mamba design is compatible with palm, claw, and tip grip styles, and I’d venture to guess that gamers who prefer a tip grip will like the wired design over the wireless Mamba thanks to its reduced weight. The cord, which is braided for extra toughness, is a generous seven feet long.

There’s no denying that Razer’s style is a big part of its appeal. The Mamba Tournament Edition follows the company’s “stealth fighter” aesthetic to a T — the front section of the case even has some chamfered plastic that makes it look like the mouse is equipped with air intakes (it’s not).

When you first plug the mouse into your PC, the two strips of LEDs on the side, the mouse wheel, and the Razer logo on the palm light up in quickly-flashing colors like a cuttlefish on an acid trip. To have any sort of control over the lights, you’ll need to install Razer’s Synapse driver software and log in with a Razer account.

Once you’ve decided to customize that lighting, and you certainly will once the kaleidoscope pattern starts to get on your nerves, your options are unlimited. If you’d prefer something simple, the main screen lets you set the color pattern, brightness, and whether or not the mouse lights turn off when your monitor does. There are five primary effects —

If you want to get fancy, you can click on “Chroma Configurator” to tune each individual LED light (16 in total) to your heart’s content. The configurator tool allows for unlimited tweaking to the light setup.

Once you’ve found a setting you like, you can save it as a profile. If you have a Chroma-enabled keyboard, gamepad, headset, or mouse pad, you can sync them all with the same profile and put on a laser light show for yourself and anyone who happens to walk by your desk.

Are these lighting effects necessary or beneficial? Not in the slightest. But they sure are pretty.

What about Razer’s other, similar mice?

Compared to the wireless version of the Mamba, the wired Tournament Edition is much lighter thanks to the lack of an integrated battery. Exactly how much lighter, I can’t say — Razer’s official specs list the Tournament Edition as “133 grams with cable,” while the wireless version is listed as 125 grams. Precise, but not useful, as you’re not tugging all seven feet of braided cord every time you move the mouse across your desk. The Mamba TE feels half as heavy as my Logitech Performance MX.

The Mamba TE’s wire may seem a disadvantage, but it depends on your perspective. Hardcore PC gamers prefer a wired mouse to cut down on lag. Personally, as someone who plays all kinds of PC games with a wireless mouse, I did find the cord cumbersome on occasion. If you already use a wired mouse, though, this won’t bother you, and the Mamba’s cord is high-quality.

The standard, wireless Mamba with Chroma lighting does cost a whopping $150, while the wired Mamba TE is about $90. That’s considerable savings, and you don’t have to hassle with recharging the batter. The big difference between the Mamba Tournament Edition and the Deathadder Chroma is the former’s more powerful sensor and the on-the-fly adjustment buttons, two features that are best explored in gaming.

Learning to do the Mamba

As stated above, the ergonomics of the Mamba are more or less identical to the Deathadder design. The long case allows for a variety of grips that should suit just about every kind of gamer, except perhaps MMO or MOBA enthusiasts (who prefer a design with extra thumb buttons, like Razer’s Naga series). The buttons are big, grippy, and easy to find without looking.

The buttons are big, grippy, and easy to find.

That said, it’s clear that this mouse is meant for shooters first. It’s best with a claw grip that allows for light travel of the already light mouse, with a thumb ready to let loose a melee attack or chuck a grenade via the side buttons. Here’s where the powerful sensor and on-the-fly adjustment buttons come into play, and help the Mamba Tournament Edition earn its keep.

You can increase or decrease the sensor’s sensitivity setting at any time, without having to go into either the Synapse program or the game’s input settings. Bringing the sensitivity up will make the mouse cursor (or the point-of-view camera, in most games) more sensitive, while lowering will make it slower. There’s an on-screen display in the lower-right corner that pops up to show you which setting you’re on. The lowest on-the-fly setting is 800 DPI, increasing in steps to 1,800, 4,500, 9,000, and 16,000.

Changing the sensitivity is incredibly useful. While playing Titanfall I preferred to have the sensor set to 4,500 when wielding the shotgun, for quick but imprecise sweeps of interior rooms. While using a handgun or sniper I would dial it down to 800 for more precise headshots. A similar dichotomy exists in The Elder Scrolls V: Skyrim, where third-person melee combat benefits from quick sweeps at a high DPI and first-person magic casting or archery begs for a lower setting for tight shots. Any game with a third-person camera and a threat from multiple directions, like Batman: Arkham Asylum or Mount & Blade, benefits from a higher DPI, while turn-based games like X-COM are better played at 800.

That being said, the sensor has its limits in terms of utility. I rarely went above 4,500 DPI, and only once (in Starcraft 2) did I bump it to 9,000. That makes the 16,000 maximum setting overkill, and the extra expense simply isn’t worth it over the DeathAdder’s 10,000 DPI sensor. It would take super-human hand-eye coordination to actually make that kind of sensitivity useful, and even those who possess it would probably prefer a lower setting.

The on-the-fly buttons are certainly worth the upgrade, at least if you play more than one kind of PC game. And even if you don’t, switching from the desktop (where a lower DPI makes much more sense) to a fast-paced game without having to load up a customized profile in Razer’s software saves quite a lot of time.

When put to use during my typical workday, the Mamba is a somewhat flamboyant but entirely capable mouse. I much prefer my Logitech for its wireless design, but there’s nothing that Razer’s mouse can’t do.

The Synapse driver software constantly runs in the background, but beyond the lighting customization mentioned above, you won’t have much need of it. Each of the six standard buttons and all scroll wheel functions can be re-bound to new settings, but the default setting is ideal for both standard desktop operations and for most games (which allow you to re-bind mouse buttons along with the keyboard anyway).

The only thing you may want to change is one of the two thumb buttons, and even then only if you need it for a particularly tricky macro, which can be bound in Synapse. Gamers who need extreme customization can set up multiple profiles of button maps and sensitivity and bind them to automatically activate when a particular game begins.

If you’re going to buy a mouse that lights up with millions of colors, you might as well go all-in and get the matching mousepad as well.

For the ultimate in portable PC gaming, you can’t do better than Razer’s own Blade series of laptops.

That mouse cable will never get tangled on an errant can of Mountain Dew again, thanks to this gadget that lifts and separates it from your desk.

The Razer Mamba Tournament Edition is a worthy but pricey wired gaming mouse. It’s a nice compromise between the standard wireless Mamba and the less expensive Deathadder.

While you don ‘t get wireless action with the Tournament Edition, you do receive an extremely handy on-the-fly sensitivity adjustment buttons, which can be quite a time-saver for switching between your desktop and multiple games. The 16,000 DPI sensor, on the other hand, isn’t all that useful.

The shape and ergonomics of the mouse are tried and true, and will work with most games. There’s a reason that the body style and materials haven’t changed in years. It works.

Compared to similar mice from competitors like Logitech, Corsair, SteelSeries, and many others, the Mamba Tournament Edition is a bit expensive. Logitech’s top-tier, wireless, rechargeable battery G700S is only $10 more, and its feature set is more comparable to the wireless Mamba then the Tournament Edition. Corsair’s Vengeance M65 is about $80. SteelSeries’ Sensei has an MSRP for $90, but in reality it goes for $60.

The Mamba TE makes up for its price with excellent build quality, a versatile grip and attractive Chroma lighting. This is not the budget option, but if you have a few extra bucks to throw at a mouse, you’ll find them well spent.