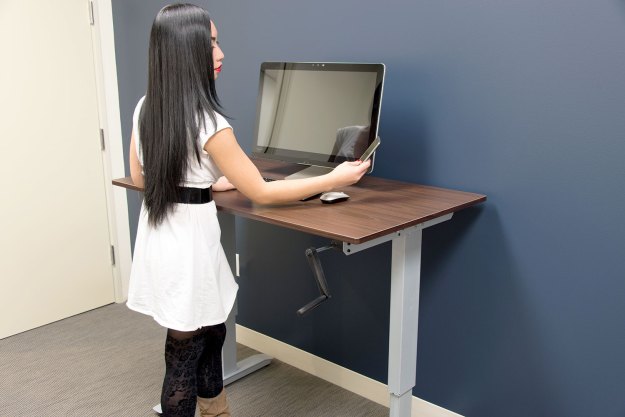 “The Rebel Up 2000 is a straightforward standing desk with a few notable perks that help you stand up and it stand out.”

Hearing the health benefits of a standing desk is old hat: increased metabolism, reduction or outright prevention of back, neck, and hip pain, a stronger core, increased alertness. But what sounds like an overhyped cure-all is actually backed up by science, and a lot of it, in fact. Standing will make you healthier, more productive, and reduce pain. So get on with it already!

But how do you get out of your chair and on your feet? The RebelDesk Rebel Up 2000 is different from many of its peers in that it utilizes a mechanical hand crank to achieve its height-adjustable capabilities, as opposed to the electronic methods used in most other standing desks. It’s a straightforward, basic desk with some notable idiosyncrasies — but using the Rebel Up 2000 comes with a few perks as well.

The Rebel Up 2000 arrived in two packages. Neither were remarkably heavy or awkward to carry, and all necessary parts and tools were included: a 48-inch laminated desktop, the telescoping legs and frame, the crank mechanism — not to mention plenty of screws and Allen wrenches. The scene should sound familiar to anyone with experience assembling furniture of the Swedish variety. I laid the parts out and set a timer to gauge the build time. The clock read 45 minutes as I tightened the last screw, following a setup process that was painless and didn’t require fiddling with any complex parts.

After the Rebe lUp 2000 was assembled and ready for use, I wasted no time cranking up the height and kicking my chair aside. While I had used standing desks before and knew what to expect, I was still impressed with how much of an improvement standing was over sitting. Immediately, my posture felt better, and I felt more alert. With continued use, I noticed diminished tightness and back pain by the end of the work day, which is consistent with the ever-growing body of research suggesting standing desks will make you healthier and more productive.

There’s nothing like first-hand experience to backup scientific claims. It seems the Rebel Up 2000 fulfills its primary directive.

When assessing the performance of a desk, the criteria is admittedly slim. You want a piece of furniture that is sturdy and well built, something that looks good, and — in the case of a standing desk — can be adjusted easily. The Rebel Up 2000 achieves all of those points, though admittedly it would be hard for most desks not to. What makes the Rebel Up 2000 worthwhile are the small perks the desk has hidden away.

The Rebel Up 2000 fulfills its primary directive.

The most obvious is the charging station beneath the rear of the desk, which includes two power sockets and two USB charging ports. The Rebel Up 2000 also has some built in cable management features, like cord trays and an adjustable grommet for holding your computer cables. They aren’t life changing, but the cable-management features help stymie the tangle that can form behind desks, and the USB charge station is a welcome addition.

We reviewed the 48-inch desk surface, the smaller of the sizes RebelDesk offers and a noticeably smaller surface than the 60-inch desk I was using prior. Our Crank 2000 held our all-in-one workstation PC, mouse, full-size keyboard, various charging devices including a smartphone and e-reader, and a few knickknacks. Overall, workflow went undiminished switching to the smaller desk, and we’re willing to bet the larger surface would fulfill your needs as well.

If you’re standing for more of the work day than sitting, taking a break is sometimes necessary. This is the most noteworthy difference between RebelDesks’ offerings and other sit-stand desks, as the Rebel Up 2000 uses a hand crank to change heights. Turning the hand crank takes longer and requires a modicum more physical effort than pressing a button, but the end result is still the same. The crank itself works smoothly and the arm feels sturdy. There never seemed to be a risk for damaging or bending the crank, which is in keeping with the desk’s overall quality. When not in use, the mechanism folds in and under the desk and stays out of the way.

The crank is an adequate replacement for the motorized systems on other desks, and without any pesky cords to worry about accidentally unplugging or getting in the way. It’s not a perfect replacement, however. While it gets you up and out of your chair just as effectively, the crank has glaring drawbacks when compared to touch controls.

The lack of presets inherent in the analog design makes returning to that perfect height you discovered last week difficult. Each full rotation of the crank raises the desk about half an inch, and I quickly became good at remembering how many full crank rotations it took (roughly 28 turns from my preferred sitting height). The slower speed raising and lowering the desk and reliance on your muscle memory are obvious differences to keep in mind, but they won’t hinder your ability to use the desk as intended.

Other shortcomings of the Rebel Up 2000 are similarly inoffensive, but still worth discussing. At taller heights, there is a slight wobble, something we’ve observed on other standing desks as well. It isn’t alarming, but bumping into the desktop or applying slight pressure causes noticeable movement. Finally, the subtle texturing on the laminated desktop can become irritating on the wrists at certain angles. Thankfully, it was possible to mostly prevent with proper height, standing distance, and posture.

The Rebel Up 2000 is a no-nonsense standing desk. It’ll do exactly what models with electronic mechanisms are built to do: get you out of the chair and on your feet. It might take a bit more time to get there, but we like to think the few extra calories burned while turning the crank only adds to the health benefits of using the Rebel Up 2000.

Still, matching the competition is one thing, and standing above another. In this regard, the Rebel Up 2000 doesn’t offer much outside of some small perks that make up for the slower and slightly more demanding hand crank. If you’re willing to miss out on the simplicity and a few special features of the Rebel Up 2000, there are other desks — like the UpLift 900 — that can fulfill the same basic requirements at the same price, and with the benefit of electronic touch controls and larger desktop. That said, touch controls aren’t necessarily better. It’s important that a standing desk lets you stand comfortably, and the Rebel Up 2000 does so in spades, making it a viable and worthy choice for your standing revolution.

Topics
Vuzix Ultralite AR glasses last up to two days on a single charge
Meta Quest Pro reviewers came away impressed by these three things
This gorgeous triple-monitor stand can hold three 22-pound displays
Reels are about to show up in yet another Facebook feature
Best VPN services 2023: today’s top picks
How to download YouTube videos
Here’s why ChatGPT might be ‘at capacity’ for you right now
The best color laser printers for 2023
Best MacBook Deals: Save on MacBook Air & MacBook Pro
Dell Laptop Deals: Save on XPS 13, XPS 15, XPS 17 and more
How to sync your Outlook calendar with an iPhone
Best gaming laptop deals: Save on Alienware, Asus and more
Best Alienware Deals: Save on gaming laptops, PCs and monitors