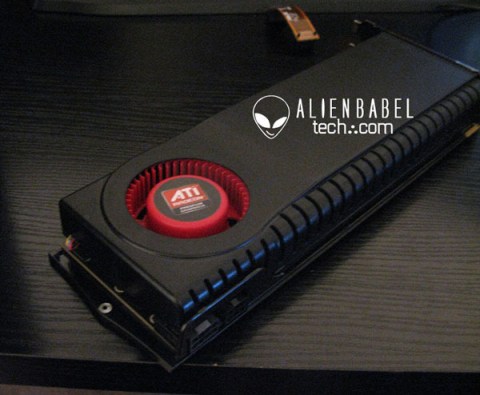 The AMD/ATI success story in the GPU sector has shown little signs of fading with the transition from the 4000 series to the 5000 series. Continuing its competitive pricing, AMD’s 5870, 5850, 5770 and 5750, the world’s first DirectX 11 GPUs, are all showing strong sales in their respective price ranges, leaving NVIDIA in a painful wait for its Fermi series to reach market readiness.

Now AMD is reportedly preparing to take the single-card performance crown, currently held by the GTX 295 away from NVIDIA, with the release of a dual GPU single-slot, single-printed circuit board solution. Codenamed Hemlock, the card was initially named 5870 X2, a designation that was reportedly scrapped in favor of the name HD 5970.

Alienbabeltech has leaked what may be the first images of the new card and it looks to be a beast in every way. Measuring 13.5 inches (34.29 cm) long, the prototype 5970 has no reason to feel insecure — after all, it’s endowed with presumably the longest PCB on a mass-produced graphics card to date. It’s reportedly a struggle to fit the card inside even full size tower cases like the Antec 1200. It is unknown if these dimensions will carry over to the production card.

The leaked card was perhaps running the leaked Catalyst 9.11 drivers, as the version number in CPU-Z was listed as 8.14.10.708 for the Direct3D driver, versus 8.14.10.700 on Catalyst 9.10. Benchmarks showing the card trouncing the NVIDIA GTX 295 in performance were aired then quickly removed at AMD’s request. If these benchmarks holds true, it appears that AMD will wrest the title of having the most powerful single-card solution, at least temporarily, from NVIDIA.

A few scraps of information remained after much of the info was pulled — apparently the fan will run at 4700 rpm under load. And the card uses one 8-pin and one 6-pin power connector. Pictures also remained posted

According to previously released information, the card will launch late this month and will likely hold the performance crown until NVIDIA launches its DirectX 11 offerings. The card is expected to feature 2 GB of GDDR5 memory and a thrid-party PCI-E bridge, similar to Radeon HD 4800 X2 cards. DisplayPort, DVI, and HDMI connections are all included, as would be expected.

Accompanying the HD 5970 will be a dual-GPU variant of the 5850, dubbed the HD 5950. No pricing has been announced, but thus far AMD has been very aggressive with the pricing of its 5000 series.

According to AnandTech, NVIDIA’s Fermi, which has been delayed already, won’t reach general availability until, at the earliest, Q1 2010. That means that for the holiday season, it appears that the highest end solutions will likely carry the HD 5970 and HD 5950. However, it is rumored that AMD may have supply issues with the HD 5950 and HD 5970 in the first months of availability, so don’t count on your HD 5970 dream machine until it arrives.

New report claims that Nvidia may leave AMD in the dust