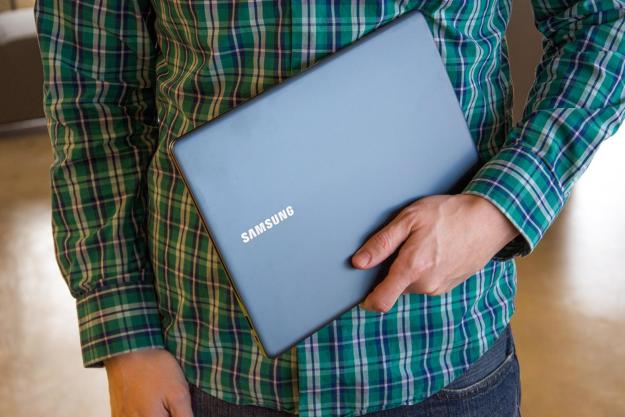 “The Samsung ATIV Book 9 makes too many compromises to justify its high price tag.”

Catering to mobile business professionals, Samsung’s ATIV Book laptops have focused on becoming thinner and quieter in hopes of providing a PC alternative to the Macbook Air (and now, the upcoming MacBook). And in the arms race of ever-shrinking business laptops, size really does matter.

With a display of 12.2 inches, fanless design, and a weight just a hair above two pounds, the ATIV Book 9 certainly appears on track to be one of the smallest laptops out there. Question is, will the steep price justify the featherweight form factor, or will cheaper competitors, such as the Dell XPS 13, prove a more practical alternative?

We got hold of an ATIV Book 9, which came stocked with four gigs of RAM, a 128GB hard drive, and an Intel Core M processor. Let’s find out if Samsung’s super-light laptop is worth the extra scratch.

Out of the box, the ATIV Book 9 cuts a slim and subtle profile. Silver trim outlines its fingerprint-resistant, matte-black finish and the full-aluminum body makes the ATIV Book 9 feel extra sturdy.

Professionals that need plenty of connection options will be happy with what’s offered here.

The clamshell design opens easily with one hand, revealing an equally smart interior. A chrome finish borders the well-portioned trackpad and also covers the dedicated power button above the keyboard. This isn’t the flashiest laptop on the block, but some might find the low-key approach appealing.

The Samsung ATIV Book 9 fairs well in the connectivity department, with one USB 3.0 port on each side of the laptop, one micro-SD multi-card slot, one micro-HDMI port, and a microphone/headphone combo jack. Samsung made sure its new laptop would play nice with older hardware, and included a USB dongle that allows for wired Ethernet access. VGA support is also available, though you’ll have to purchase the corresponding dongle separately.

Such backward compatibility is a nice touch, and puts this notebook ahead of recent convertibles we’ve reviewed, such as the Acer R13 and Yoga 3, and arguably bests the Dell XPS 13, which offers DisplayPort instead of HDMI. Professionals on the hunt for a mobile machine with plenty of connection options will be happy with what the ATIV Book 9 has to offer.

A chrome-plated power button comprises the entirety of the notebook’s external controls, and power supply is provided by a small, travel-ready AC adaptor. Bluetooth 4.0 and 802.11ac Wi-Fi support are standard.

The ATIV Book 9’s inputs are a mixed bag. The laptop’s keyboard is generally well proportioned, but it seems Samsung had it out for a couple keys in particular. Most notably, the Backspace and Enter key have been nearly chopped in half. While we were able to adapt to most of the notebook’s keyboard concessions, the Backspace key proved to be an enduring annoyance.

Keyboard backlighting is also missing. That’s not unusual for a super-slim system, but it’s certainly a compromise for any laptop sold above $1,000. Users are likely to expect the feature in this price range.

We also found the touchpad to be sticky and unresponsive, oftentimes requiring more than one swipe to get the cursor where we wanted it to go. Anyone regularly dealing with data entry or document editing might be seriously frustrated by the temperamental controls.

Blinded by the light

Chronic sufferers of display glare will be happy to know the ATIV Book 9’s 12.2-inch, 2,560 x 1,600 display offers enough output to light up nearly any environment. With a maximum brightness of 448 lux, we actually squinted the first time we cranked brightness up to 100 percent. That’s well above any other laptop we’ve yet tested, with the closest runner up being the Macbook Pro with Retina at 340 lux.

To top it off, the ATIV Book 9 also comes with an Outdoor Mode that jacks the brightness all the way up to 893 lux. So if you have a business meeting on the surface of the sun, you’ll be safe knowing that glare won’t be an issue. Of course, battery life might be, since the display really sucks down juice at that setting.

Color accuracy unfortunately wasn’t quite as amazing. With 96% of the sRGB scale and 72% of AdobeRGB scale represented, the ATIV Book 9 sits a bit below the Macbook Pro with Retina, though it didn’t fare as poorly as the Lenovo Thinkpad X1 Carbon. The Samsung isn’t bad, but it doesn’t stand out, either.

With its diminutive size, the ATIV Book 9 looks like it was created with cramped subway seats and airplane tray tables in mind.

Still, we found the ATIV Book 9’s screen looked good in practice. Viewing angles are impressively wide with almost no color shift. Samsung has also included Secret Screen mode, which allows users to change the opacity and darkness of individual windows, allowing for a bit more privacy when working in crowded quarters.

And for such a small device, the ATIV Book 9 can turn out some impressive audio. The two 1.5 watt speakers sound great, even when turned on full. While there’s expectedly little bass to the output, the sound is crystal clear.

The ATIV Book 9 definitely strays toward the mobile side of things, with less potent hardware than either the Dell XPS or the MacBook Pro with Retina. With a 900MHz Intel Core M processor (that can Turbo Boost to 2.4GHz), four gigs of RAM, and Intel HD Graphics 5300 for its GPU, this notebook won’t be won’t be winning any races.

Our first benchmark proved so with some pretty low scores. Using Geekbench, we recorded a score of 2515 for single-core and 4525 for multi-core. As you can see below, the ATIV Book 9 has scores similar to the Asus T300 Chi, a convertible laptop, than to the XPS 13 or MacBook Pro.

Testing the 128GB SSD with CrystalDisk Mark’s sequential read/write benchmark brought back some fairly lopsided results. While the sequential read score came in at a speedy 521.8 megabytes per second, writing to the hard drive occurred at an achingly slow 135.9MB/s.

Using 3DMark’s benchmarking test, the ATIV Book 9 continued to show its mobile roots with some fairly modest scores. Comparable to the Aspire R13 or T300 Chi in graphical capabilities, the system couldn’t quite keep up with the scores being set by the XPS 13.

With such a beautiful display, it’s a shame the Samsung isn’t capable of pushing more pixels per second. Gaming on the machine was workable, with Diablo 3 producing an average of 34 frames per second at low detail and 1080p, but it’s not an overly demanding title. More modern games, particularly shooters and action titles, will struggle.

The ATIV Book 9 looks like it was created with cramped subway seats and airplane tray tables in mind. And at 2.09 pounds, it’s also impressively light. It’s almost a full pound less than Apple’s 13-inch Macbook Air, which weighs in at 2.96 pounds, and even the miniscule 11” Macbook Air manages to outweigh the ATIV Book 9 by about a quarter-pound. Samsung’s little laptop also measures 0.46 inches thick, which is thinner than both of Apple’s offerings. In fact, its specifications are extremely similar to Apple’s upcoming 12-inch MacBook.

Unfortunately, battery life proved pretty mediocre. When we calibrated the display to 100 lux it only managed to average five hours, 41 minutes in the Peacekeeper web browsing battery test. That puts it more in line with convertible laptops, rather than dedicated clamshell machines. To compare, the Macbook Pro with Retina managed a whopping ten hours and 11 minutes, while the XPS 13 brought in a time of nine hours, 25 minutes.

The closest battery life comparison that we could find was a recently reviewed convertible, the Yoga 3. For a twelve hundred dollar laptop, it’s pretty difficult to justify the ATIV Book 9’s terrible battery life, as it seriously hampers the mobility of a device designed for exactly that.

Power draw for the ATIV Book 9 was fairly modest, requiring 11 watts while idling at 100% brightness (which, as mentioned, was extremely bright). Running the Furmark stress test we managed to get the power draw for the ATIV Book 9 up to 33.5 watts, which ranks with the Dell XPS 13 as one of the more efficient machines we reviewed this year. Unfortunately, it’s just not enough to compensate for the small, 35-watt-hour battery.

The ATIV Book 9 remained fairly cool throughout most of our review, and long work sessions rarely brought the laptop above 90 degrees Fahrenheit. After running Furmark for five-minutes, we were able to get the temperature up to 104.9 degrees at the hottest point, located near the display hinge. That’s warmer than we were able to get the Dell XPS, though we never felt that level of heat during work or gaming sessions.

Generating such little heat has allowed the ATIV Book 9 to ditch whirring fans and go completely silent. While last year’s model was generally quiet, its fans could rise as high as 50 decibels when working with 3D graphics. The silent treatment also elevates the ATIV Book 9 above both the XPS 13, and the Macbook Pro with Retina, as both machines generate some level of fan noise.

The ATIV Book 9 comes with a number of preinstalled software and taskbars. Samsung’s Sidesync 3.0, and Samsung Link both allow the sharing of windows and files between some of your other peripheral devices, such as tablets and smart phones.

Two additional, preinstalled taskbars come with the system. The “Smart Advisor” taskbar is situated at the top of the screen and is almost comically intrusive. Down by the start menu is another added toolbar that allows you to access a few of Samsung’s included applications.

As for warranty, Samsung provides one year Standard on parts and labor, which is typical for any modern laptop.

The ATIV Book 9 sits in a tough spot. While its clearly looking toward the slim, clamshell design of a dedicated notebook, it is held back by its performance and battery life. Inputs are also a problem with an unresponsive touchpad and a cramped keyboard tarnishing the user experience.

Admittedly, the notebook’s display is both bright and beautiful. Unfortunately, its hardware limits users to movies and graphically outdated games. And with such a high price tag, all of these little concessions add up.

For three hundred dollars less than the ATIV Book 9, the Dell XPS 13 offers superior performance, battery life, and inputs with only a mild boost in bulk. The Asus T300 Chi is five hundred dollars cheaper, and sacrifices just a bit of performance and battery life for the price. Only Apple’s comparable, and currently unreleased, MacBook is similar in price and features.

If you’re dead set on the slim look for this spring, and you want a Windows machine, the ATIV Book 9 fits the bill, but it costs too much and does too little to recommend it to most users.