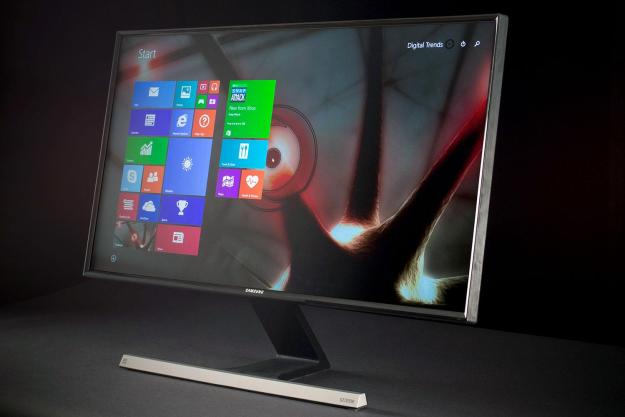 “The S27D590P offers strong image quality for the price, but we wish it had different inputs, and a better stand.”

Anyone looking for an inexpensive 27-inch monitor these days can now claim to be spoiled, due to the abundance of choices out there in this area. Prices have dropped dramatically over the last year, and more advanced panel technology has proliferated as well. The result is a number of big, entry-level models that promise solid image quality.

Samsung’s S27D590P is one of many such options. Like other affordable monitors from the company, it uses a PLS panel, which is essentially Samsung’s version of IPS. It also provides 1,080 horizontal pixels. The monitor comes in 23-inch and 27-inch flavors. The larger of the two, which is the one we reviewed, sells for $299.99 from Samsung’s official website as of this writing.

The price is only mid-range by today’s standards. Some competitors sell 27-inchers for as little as $209, so the S27D590P can’t claim to be complete bargain. Still, only LG and ASUS sell a wide range of IPS monitors for less. Let’s see if Samsung’s entry is worth the extra bucks.

The S27D590P’s most striking trait is its thin bezel, which is only a third of an inch thick on all sides. Few displays can match the thin frame of this Samsung monitor, no matter their price, and it endows the S27D590P with a sleek, modern look.

Few displays can match the thin frame of this Samsung monitor, no matter their price.

Bezels aside, however, there are signs of this monitor’s budget-ish nature. For instance, plastic is the dominant material here. In some areas, like the back panel, it feels a bit cheap. We also dislike the stand, which is little more than a prop that the monitor sits on. You can’t make ergonomic adjustments, and a VESA mount is absent. Adjusting the monitor to a comfortable position is only possible by stacking it on top of other stable objects, like hardcover books.

Video input is handled by two HDMI ports and a single VGA connector. This gives the monitor one extra HDMI port than its sibling, the Samsung S27D390H, which is priced $10 higher on Samsung’s site. We would have liked to see a DVI input too, because many computers that are three to five years old have one. You can use a DVI to HDMI cable of course, but for many users, this is an extra that they wouldn’t need with a different monitor.

Another feature that separates the S27D590P from the S27D390H is the on-screen control scheme. The S27D590P upgrades to a joystick-like controller located on the lower right hand edge of the display. Though it’s hard to find at first, it’s easy to use once you get the hang of it. It’s also far better than the finicky touch buttons used on the S27D390H (and many other monitors).

The controls themselves are a bit limited, however. Brightness, contrast and sharpness are available, along with basic RGB adjustments. There are also presets for color tone and gamma but, as is often the case, they don’t conform to any specific standard.

There are two additional settings, dubbed Magic Bright and Magic Upscale, that are unique to Samsung displays. Magic Bright offers a selection of preset modes that help users select settings which are (theoretically) ideal for specific content. For the most part though, it seems to exaggerate colors and contrast, an effect that may look good in a store, but offers little real benefit.

Magic Upscale is similarly ineffective. Samsung tells us that the feature uses an up-scaling algorithm to enhance low-resolution content, but to our eyes, it did little but unnaturally boost sharpness. Video clips viewed at 480p and 720p resolution looked no better with Magic Upscale on than they do with it off. The main benefit can be found in fuzzy text, which is sharpened slightly with Magic Upscale on.

The Samsung S27D590P offers solid color accuracy out of the box. The average delta error was 1.19, which is great. A DeltaE of one or less is generally regarded as unnoticeable by the human eye. Better still, most of the error was in Cyan, which is typical of LED monitors. Other colors all had an error rating below one.

The panel also rendered a respectable 71 percent of the AdobeRGB gamut, reached a contrast ratio of 610:1, and generated a maximum brightness of 321 lux. All of these numbers are strong. Gamma was a bit out of alignment, coming in at 2.3 instead of the target 2.2, but that’s a reasonable result for a mid-range 27-inch monitor.

Our only real complaint is sharpness. The S27D590P’s 1080p resolution is stretched thin across the display’s width. Individual pixels become visible when fine details like small fonts are displayed. HD video also doesn’t look as crisp as it could.

Still, our eyes were pleased with what they saw. The accurate colors provide a vibrant, life-like look to high quality video, and the contrast ratio is good enough to create depth in movies and images. The monitor’s default brightness setting is far too high, however, and can become distracting when viewing in a dim environment. A powerful backlight is hardly necessary, because the panel features a matte coat that does a good job of diffusing ambient light.

The out-of-the-box picture quality, though satisfying, isn’t perfect. We tried to improve it using our calibration tools, but this was mostly futile. The additional gamma and color presets are all less accurate than the default settings, and in some cases, dramatically so. Decreasing brightness to a more manageable 120 lux made the picture easier to enjoy in a dark room, but also decreased the contrast ratio to 570:1.

Software calibration with Datacolor’s Spyder4Elite yielded a slight expansion in color gamut, from 71 percent of AdobeRGB to 72 percent. We also noted very minor improvements in color, though Cyan’s DeltaE remained above 5, and the average DeltaE dropped by just a hair to 1.17. Gamma absolutely refused to conform to the standard 2.2 curve.

As the numbers suggest, calibration had minimal effect on image quality. A straight head-to-head comparison between pre and post-calibration settings made it apparent that some unnatural warmth was taken out of images, but it was difficult to see even while switching back and forth at the click of a button. No difference was visible in movie clips or photos.

While improvement would be nice to see, we can’t complain much, given the monitor’s strong performance at default settings. The S27D590P outperforms more expensive monitors like the ultra-wide LG 34UM95, and the older Samsung S27C750P. Only Acer’s K272HUL can match up. It has a narrower color gamut, but better gamma.

Samsung’s S27D390H, which we’ve also reviewed, offers nearly identical performance, though it did manage to hit a 2.2 gamma curve instead of 2.3. The S27D590P’s advantages over the S27D390H can be found in design and features, but not image quality.

The Samsung S27D590P offers strong image quality at an affordable price. Both it and the S27D390H can beat much more expensive monitors from last year, and they hold up well against current competition also. They’re not perfect, but they do provide good color accuracy, and enough contrast to create a sense of depth.

Image quality aside, the S27D590P’s poor stand and basic connectivity options are issues that any buyer must take note of. We gave the S27D390H a bit of a pass here because of its low price, and considering that the S27D590P is actually $10 cheaper directly from Samsung right now, we feel compelled to do the same again. Most competitors that sell displays priced above $300 at least offer tilt, but the S27D590P costs $300 even. Some monitors, like the Dell S2740L, include a VESA mount. Alternatives from Dell and LG often include DVI, too, while Asus and LG bundle speakers into many comparable monitors.

This leaves the S27D590P a bit short on features. Make no mistake; this is an excellent monitor – but it’s limited connectivity and inflexible stand keep it from being a total knockout.