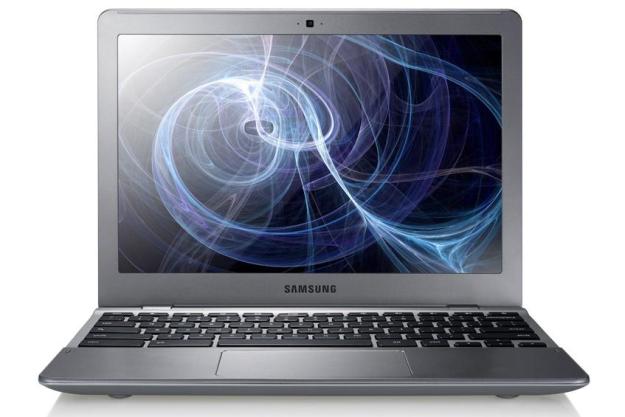 “This laptop is a good choice for consumers who need portability but can’t spend a lot of money. Chrome OS is still limiting, but it does what it’s designed to and the Series 550’s hardware is an extremely good value.”

Google’s Chrome OS was going to change the world. It was a new, cutting edge way of thinking about an operating system. Software? Pffftttt…that’s old school. Windows? So 2009. File managers? Haha, right. And I bet you use a Blackberry.

Then Chrome OS launched and not much happened. It became immediately apparent to everyone involved that the operating system was immature, that Google’s services weren’t ready to replace software and that the limited hardware selection handicapped Chromebooks out of the gate. We tore into the original Samsung Series 5 by concluding that “Google’s cloud experiment remains a pipe dream.”

Some companies might have given up when faced with such criticisms. Others might stick their fingers in their ears. But Google is nothing if not pragmatic, and the company’s developers have been busy implementing changes that respond directly to complaints and improve the look and feel of the operating system.

These changes are available on older Chromebooks, but are now being fully realized with a brand new model: the Samsung Series 5 550. This new laptop upgrades to a Celeron processor and doubles down on RAM while retaining a similar 12.1-inch form factor and keeping weight at around 3 pounds.

Can this new laptop justify Chrome OS, or does Google still have its head in the clouds? Let’s find out.

Better, but not perfect

The Samsung Series 5 Chromebook was not a bad-looking laptop, though it did feel a bit cheap overall. This new model is also attractive and manages to clear up some of the rough edges found on the previous model. Material quality is much higher, and the design has a sleeker, more modern look at the original Series 5, which had a Play-Skool quality when viewed from certain angles.

Despite the refinements, the new laptop has a few aesthetic issues. For instance, panel gaps are large and the front of the laptop comes to an unpleasing plastic point that may occasionally catch a finger or the palm of your hand. The silver color of the lid and upper chassis does not match the color of the lower chassis. Most users won’t notice this at first but once you see it, it can’t be un-seen.

What the Series 550 lacks in detail it makes up for with solid construction. You’ll find little flex in this laptop no matter what you touch. The display hinges are tight and don’t allow the screen to sway (much) while the user types. Even the lid feels robust and allows nearly no flex when it is handled roughly.

Connectivity is provided via two USB 2.0 ports (one on each side of the laptop), DisplayPort and a single combined headphone and microphone jack. More ports would be appreciated, but probably aren’t necessary in this type of laptop. Our only complaint in this area comes from the power jack. It’s thin, shallow and easy to accidentally disconnect when the laptop is bumped the wrong way or moved.

My, that’s a big keyboard you have

One oft-forgotten advantage of every Chromebook is the unique keyboard. Because these laptops don’t run Windows the keyboards don’t have to be designed with that operating system in mind. There’s no need for the normal Windows function keys. All of the keys are larger as a result. While the Series 550 only has a 12.1-inch display, the width of the keyboard matches some 14- and 15.6-inch laptops.

You might think that the different layout would take some time to time to learn, but it comes naturally. Most of the keys remain in their normal locations. Only the function row, which is entirely different from a Windows laptop, takes time to re-learn. Once you do, the layout is useful and provides an easy way to navigate the operating system.

The touchpad is a repeat of the keyboard. It’s much larger than you’d expect to find on a laptop of this size, and provides a surface that is relatively smooth, but does include a bit of texture. Left and right clicks are controlled by depressing the lower half of the touchpad’s surface.

Multi-touch support is still limited on Chrome OS, but what is there — primarily multi-touch scrolling — works much better than it did at launch. In fact, the Series 550’s scrolling multi-touch works nearly as well as a MacBook.

While this laptop’s budget focus is evident in its build quality, you won’t find a similar story told by the display. The 1280 x 800 resolution isn’t going to set records, but it looks sharp when compacted into a 12.1-inch display.

This is supported by a matte coating, bright backlight and decent color reproduction. Stir those together and you have the makings of a good experience in all lighting conditions. There’s not enough contrast for amazing black levels, but overall quality easily rivals some much more expensive laptops.

The story is different with audio quality. This was a weakness of past Chromebooks and, though improved somewhat, it remains a weakness here. Audio doesn’t sound great, and volume is only so-so, even when turned up to maximum volume. You’ll want to pack a pair of headphones for serious media enjoyment.

The previous Chromebooks were known for their basically silent operation and low thermals. With only Atom processors inside and no discrete graphics, there simply wasn’t much to cool.

Upgrading to a new processor hasn’t upped the volume of the fan. In fact, we never heard a fan during the time we used the laptop, though there are vents that hint at its existence.

Exterior temperatures were extremely low, often times hovering in the high 70s to low 80s Fahrenheit, and our thermometer never read above 88 degrees. This laptop can be comfortably used without a desk in any situation.

Boasting a small chassis and a weight of nearly three pounds, the new Series 550 Chromebook is easy to pack. Any messenger bag capable of holding a computer larger than a netbook will accommodate this laptop. Even the power supply is small and light, which is a boon for long-distance travelers.

We can’t run our typical battery life tests on the Samsung Series 550 for a direct comparison because ChromeOS doesn’t support our normal benchmark. In subjective real-world usage, we were able to obtain nearly eight hours of use during light web surfing and online document editing, with the backlight at or near max for most of the duration. More intense usage would drain the battery quicker, but the nature of this device makes such use unlikely.

The basic version of this laptop comes with Wi-Fi (like every other laptop), but we received the model with 3G support. We were surprised to find that the 3G enabled version comes with a 2-year Verizon service plan that offers a modest 100MB per month. This is included in the price of the Chromebook, which is $100 more than the Wi-Fi only version.

Don’t expect 3G to work well everywhere, however. We found that in rural areas the connection was spotty and slow, even in regions where a Verizon smartphone (the HTC Thunderbolt) operated on 3G without trouble. You’ll have the best luck in urban and suburban areas.

The newest version of Chrome OS looks almost nothing like what shipped with the first models. While you still use a browser to access all apps and services there is now a desktop and support for multiple windows. Google has also added an attractive apps tray and a taskbar that has a few of the best features of Windows 7, like the ability to pin apps to it permanently.

Chrome OS is not long as useless offline as it once was. It’s now possible to make Gmail viewable offline and Google Docs is due to receive the same treatment by the end of June. Many apps are usable offline, as well, though some features may be disabled.

Google has been busy squashing bugs and improving performance, and the developer’s efforts have paid off. Chrome OS is now a slick, stable operating system. It is still woefully lacking in features, however. File management remains a pain, there are few security options and no parental controls. This is still a second computer rather than a device suitable for use as a primary PC.

If you’d like to learn more about the changes check out our overview of the new desktop, which was published several months ago when beta versions of the interface became available on older Chromebooks.

While older Chromebooks had to make do with Atom processors the new Samsung Series 550 comes with an Intel Celeron 1.3GHz dual-core CPU based on the Sandy Bridge architecture. Like all Celerons, it lacks Intel’s more advanced features such as Turbo Boost and Hyper-Threading. Even so, this is a far more advanced processor than the Atom previously available.

The result is an astronomical increase in performance. Once again, most of our benchmarks won’t work in Chrome OS, but we can run browser benchmarks like Peacekeeper. The previous Samsung Series 5 Chromebook managed a score of around 500 in that test, but the new model scores around 1,700 on average. That’s a massive increase.

Upgrading to Sandy Bridge also bestows the new model with updated Intel HD graphics. Though down-clocked compared to the version in mobile Core variants of the architecture it’s (yet again) an incredible boost over what was in the original Series 5 Chromebook.

While the upgrade is modestly noticeable when browsing a single tab, it becomes impossible to miss once you open multiple tabs or Flash-heavy content. Previous models choked on more than 10 tabs, could hardly handle browser-based games, and could not smoothly play YouTube video.

Flash video still skips a frame here and there when played in HD, but we’ve seen that occur even on high-end desktop rigs with four cores and three discrete GPUs. What’s important is that the new Chromebook feels like a normal notebook rather than a netbook that’s missing Windows.

What the Chromebook does, it does well. It’s not an exaggeration to say that this is the best Web browsing experience that you’ll find on a laptop. It’s quick, smooth, easy to navigate via multi-touch scrolling and supported by a brilliant matte display. As a portable web browser, the Samsung Series 5 is perfect.

So that’s the question: Do you want to buy a $450 (Wi-Fi only) or $550 (3G) Web browser? The question seems absurd at first, but we think an argument can be made that the new Chromebook is a logical choice.

Yes, you can buy Windows netbooks and ultraportables for a similar price. They will have a broader range of functionality and be far more useful when you have no Internet connection. You can’t, however, buy a new Windows ultraportable with anything better than an Atom or AMD E-Series processor for $450. While other laptops with similar price tags are technically capable of doing more, they do many things so poorly that the added functionality is nearly irrelevant.

This laptop is a good choice for consumers who need portability but can’t spend a lot of money. Chrome OS is still limiting, but it does what it’s designed to and the Series 550’s hardware is an extremely good value.