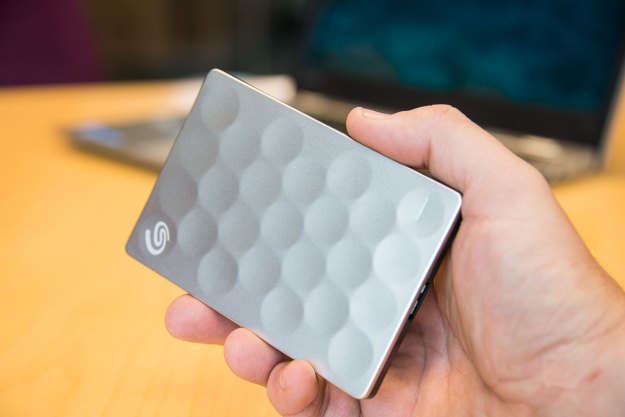 “Lightweight and tiny, the Seagate Ultra Slim lets you carry 2TB of data with you anywhere.”

It is staggering how fast hard drive storage is evolving. A decade ago, most people had never heard of a terabyte. Now, 2TB drives aren’t uncommon. And they’ve become small enough to fit in your pocket. Seagate’s new Ultra Slim line shows just how dense data storage can be, and does so at a reasonable price — a mere $100 for 2TB, and $70 for 1TB.

There are cheaper drives with the same amount of storage, but Seagate is hoping the drive’s form factor and design will help make up the difference. Is the company right? We grabbed a 2TB silver model to find out.

Are we allowed to call a hard drive cute? Because this thing is tiny, and has dimples.

The metal plate on top, available in silver and gold color aluminum, is covered in an alternating series of indented bubbles. Not much breaks this pattern up, save for an indicator light and a logo in opposite corner dimples. The bottom and the sides, meanwhile, are a single piece of lightweight plastic. None of the material feels tough, but it does the job well enough.

Can a hard drive be cute? Because this thing is tiny, and has dimples.

Seagate calls this an “ultra slim” drive, and that’s not an exaggeration. The unit is only .38 inches thick, which is downright tiny for a mechanical hard drive in an enclosure. The already-thin Western Digital My Passport Slim is .49 inches thick, by way of comparison, and that was about the thinnest device on the market until now. The other dimensions are standard: 4.47 inches long, 2.99 inches wide, which is about the size of every portable drive on the market at this point. All told this hard drive is likely smaller than your phone, and at 4.8 ounces it probably weighs a little less too.

The included cable connects over USB 3.0, with the standard type-A connector on one side and a type-B micro connector on the other. At 15 inches long, it’ll work for most scenarios, but you may need a different cord if you don’t plan to rest the drive on top of your desktop.

If we have one criticism of this drive, it’s the sound. When you plug in the Seagate, you’ll hear that it’s on, thanks to the extremely thin case. It’s not too obnoxious, but its slight hum is audible in a quiet room.

Fast as a mechanical drive can be

Despite its small form factor, the Seagate Ultra Slim has a traditional, mechanical hard drive inside. Does cramming moving parts into a small case compromise speed?

Apparently not, if our CrystalDiskMark sequential tests are anything to go by. Over USB 3.0 we saw a read speed of 130.8 megabytes per second, and a write speed of 129.8MBps. That’s about the fastest speed you can expect from an external mechanical hard drive, and is in fact nearly identical to the speeds we saw from LaCie’s Porsche Design. It’s also similar to internal mechanical hard drives we’ve tested, though there are faster models.

Our HD Tune benchmark, which runs a longer file transfer, gave us lower numbers. We saw a read speed of 91MBps, an access time 12.4ms, and a write speed 94.9MBps. These figures are mediocre, but not unusual for a compact mechanical drive.

Given the speed limitations of a mechanical drive, you might be wondering if USB 3.0 is even worthwhile. Our answer – yes! Over USB 2.0 this drive offers a read speed of 41.1MBps, and a write speed of 42.8MBps. That’s considerably slower, so do make sure you plug this drive into a USB 3.0 port whenever possible.

Are there faster USB 3.0 drives out there? Yes, but most are SSDs. The Samsung T3 portable SSD, for example, offers read speeds of 422MBps, and a write speed of 393MBps. But that speed comes at a price — $850 for 2TB.

Mac users will be pleased to have access to NTFS drivers for Mac, free of charge, meaning Mac users can write to the drive even if it’s formatted for Windows. Western Digital does not offer this software with its comparably priced hard drives.

Seagate also offers a backup program offered for Windows users, called Seagate Backup. It seems to do its job, but we’re doubtful most users will prefer it over other free or paid backup solutions.

Seagate offers a two-year warranty for its hard drive. One year warranties are more typical, so this is generous, especially given the low price point of the drives themselves. But Seagate’s main competitor, Western Digital, offers a three-year warranty on many of its external drives.

If you want a physically small external drive that’s big on space, and at a competitive price point, you could do worse than Seagate’s Ultra Slim. There are cheaper drives out there, but not with this form factor. And seeing as no mechanical drive can offer anything resembling a speed advantage in the USB 3.0 era, form factor and price are the main things you should be considering.

The thin case does a poor job of silencing the drive’s hard disk.

You can find heavier and bulkier drives for $10 to $20 cheaper. The Western Digital My Passport Ultra-Portable, for example, sells for $90 with 2TB of storage, and comes with a three-year warranty. That combination of lower price point and warranty coverage means it’s well worth considering, but Seagate’s Ultra Slim is both smaller and lighter.

You could also look at a more “premium” drive, like the LaCie Porsche Design, but it’s bigger, heavier, and $50 more expensive (because it’s named after a car). If you want extreme speed, you could look into an external SSD like the Samsung T3, but at nearly eight times the price you’d better absolutely need that performance.

For most people, Seagate’s Ultra Slim is a great value in a tiny form factor. We recommend it if you need a basic, yet extremely portable, external drive.

The best SSDs for 2022
Looks like Apple’s M2 MacBook Pro has a major SSD problem
A huge 16TB SSD is coming soon, but there’s a catch
Microsoft could finally kill HDD boot drives for good
Cooler Master’s Orb X gaming pod is futuristic and utterly absurd
Get this Lenovo gaming laptop with an RTX 3050 Ti for $550 today
HP’s popular Spectre x360 2-in-1 laptop is $350 off right now
This massive 17-inch Chromebook is under $200 at Best Buy
Get this 15-inch laptop with a year of Microsoft 365 for $199
This Alienware gaming PC with an RTX 3080 Ti is $530 off right now
MacBook Air (M1) is $199 off, with delivery in time for the holidays
I used ChatGPT to interpret my astrological makeup, and it was surprisingly good
Apple mixed-reality headset: Everything we know about Apple’s VR headset