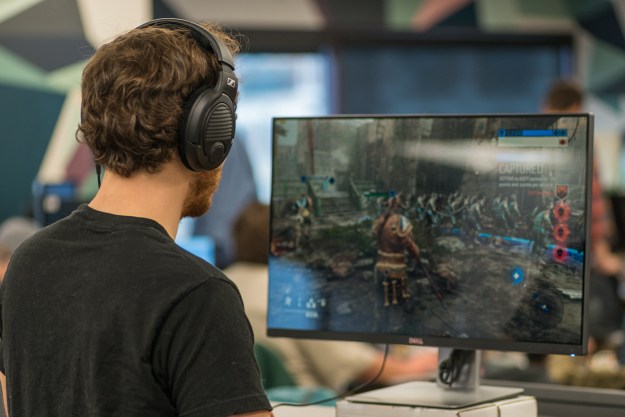 “The Sennheiser PC 373D is an incredibly comfortable $250 headset that sounds like it should be $100 cheaper.”

Sennheiser is known for building high quality audio hardware that justifies the premium price tag it commands. The PC 373D is Sennheiser’s open-backed gaming headset (in contrast to the close-backed GAME ZERO), and at $250, are one of the more expensive units on the market. Unfortunately, that primo price tag just isn’t backed up with the right features.

Sennheiser houses the PC 373D in a protective plastic shell within their box, which is smart since the body of the 373D is plastic — an odd choice that undercuts the $250 price tag. The rest of the contents include an unusually long cable, user booklets, and warranty information.

The PC 373D feature partially open-backed earcups, with a large boom mic affixed to the left earcup and a volume control wheel on the right. Velvet-wrapped memory foam lines the cups and the band, which feels incredibly good. Initial clamping force is a bit much, but once the memory foam settles, you’re left with an even and comfortable fit around the ears and head. This is, surprisingly, the best aspect of the PC 373D overall. Long play sessions are no issue, and we’d be hard pressed to find another headset that feels as comfortable as these. Unfortunately, our evaluation of the PC 373D is a lot less glowing from here.

As mentioned before, the earcups, mic, headband, and swivel joints are all made from hollow plastic with a smooth matte finish. This makes the PC 373D feel less posh than you might expect for the price. On the plus side, the headset is lightweight, which makes it all the more comfortable to wear.

The boom mic is another aspect we’re less than thrilled about. It’s a long, thick piece of plastic with a rubber strip in the middle that allows the mic to be moved a few degrees inward or outward. The rubber material doesn’t hold and tends to drift after it’s been moved. We didn’t find significant differences in recording capabilities at various distances, so the drift isn’t much of a problem.

The PC 373D’s curious cable is long, rubberized, and broken into two sections. On the headphone end is a 2.5mm jack, but the other end of that cable terminates with a female micro-USB jack with Dolby surround switching placed inline. The second section of cable finishes the job, with a male micro-USB tip terminating in a standard USB jack to be plugged into your PC. Our question is: Why? It’s an odd choice, especially when 7.1 surround sound can only be enabled when using the headset with Sennheiser’s included PC app. We’d rather have an inline mic mute button instead. The only way to mute is to flip the boom all the way up, but the only feedback that the mic is muted is a small mechanical click.

While some of the PC 373D’s design elements leave something to be desired, the headset sounds excellent — just as we expected from Sennheiser. Playback is clear, with balanced audio that doesn’t favor one aspect of the mix over another. This means that bombastic scenes in games like Battlefield 1 won’t rattle your teeth with bass rumble like the Razer Mano’War 7.1 would. That can be a good thing, especially in games like Heroes of the Storm or Overwatch, where audio cues are paramount to successful matches.

Once the memory foam settles, you’re left with an even and comfortable fit.

The included PC software works well enough, with a basic user interface that’s easy to understand. The program includes three EQ presets: music, gaming, and eSport. Unfortunately, we found these presets to be inferior to the standard mix, and avoided all of them for the lion’s share of our evaluation time. Dolby 7.1 surround effects are effective, and very clear, but just slightly edged out in terms of placement accuracy by the Logitech G533’s DTS 7.1 performance. The Razer Mano’War 7.1 is similar in terms of surround capability, but the PC 373D’s sound signature is far superior.

The mic on the PC 373D is passable, but we were surprised to note the sound was especially compressed, with considerable pops accompanying consonant sounds like “p” and “t.” It does its job well enough, and we’d be willing to forgive the punchy consonants if there weren’t better mics out there on devices that cost $100 less. This point becomes even more apparent when you factor in the previously mentioned design decisions Sennheiser made with the mic. How strange this is for a company that makes microphones for professional use.

The PC 373D’s USB-only connection does technically mean it can be connected to a PlayStation 4, but we wouldn’t recommend it, primarily because the sound output level is quieter on PS4, but also because the lack of software compatibility removes the 7.1 and EQ settings. As the name implies, the PC 373D is a PC device, though add-on adapter cables will allow use with some gaming consoles.

PC gamers looking for an extremely comfortable fit and audiophile-grade music playback, with no budgetary constraints, may want to give the PC 373D consideration. For almost everyone else, this headset will be a tough sell.

The PC 373D feels amazing, and it is hands-down the most comfortable PC gaming we’ve tested this year. However, design quirks, restricted use, and a princely price point make it a non-starter for most gamers.

While it’s a slight step down in terms of comfort, the Logitech G533 has a better mic, solid overall sound quality — including incredible DTS 7.1 surround sound — is wireless, and costs $100 less.

We aren’t convinced the build quality will stand the test of time … or minor falls or accidents. The headset’s swivel joints also feel looser than we’d like, and the padding, however comfortable, can’t easily be cleaned (though it can be replaced).

No. If your sole directive for buying a new headset is comfort, the 373D are a worthwhile purchase, but by all other measures it’s no better than other premium headsets on the market, while costing $100 to $150 more. Because of this, we’d recommend looking elsewhere.

What is DirectX, and why is it important for PC games?

The best Xbox One headsets for 2022

What is a PC bottleneck, and how do I avoid one?