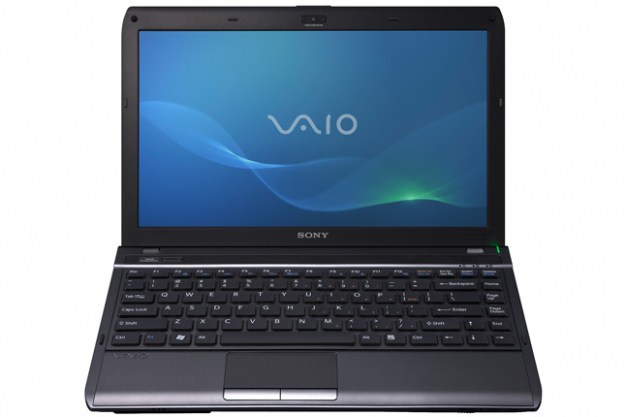 “Sony's thin-and-light Vaio Y comes in a clean-cut package, but don't expect it to come out swinging with performance or battery life.”

As Sony reaffirmed most recently by selling a $1,400 netbook, the company that built a reputation on luxury and performance doesn’t do “cheap.” That hasn’t them though, from offering a number of surprisingly affordable notebooks further up the performance ladder. We saw Sony concede to practicality once with the well-equipped $800 CW Series, and now the Japanese titan appears to be bowing to budget restraints yet again with the similarly priced Vaio Y series. Compared to the well-equipped CW, the Y strips down some of the bulk and drops one size class to compete in the increasingly popular thin-and-light category, with the likes of notebooks such as the Asus’ UL30A. Like that machine, it uses an Intel CULV dual-core processor for extended battery life, and omits an optical drive in favor of a slimmer profile, leaving a machine with much of the portability of a netbook but few of the size compromises.

Like most thin-and-light models, the miserly Intel U7300 CULV processor clocked at 1.3GHz forms the cornerstone of the Vaio Y, backed by Intel 4500MHD integrated graphics, 4GB of DDR3 RAM, and 500GB hard drive. You’ll find the usual 802.11n Wi-Fi, Bluetooth, and an unremarkable 1.3-megapixel webcam here, but no optical drive – a typical sacrifice made by all but the most expensive models in this class, like Lenovo’s $2,090 X301.

For $800, you’re getting a lot less hardware here than with the CW, but Sony makes amends by truly delivering on the “thin and light” promise. At 3.9 pounds, it weighs only a bit more than most netbooks, and sports a slim 1.2-inch profile that seems to disappear into most backpacks. However, some other machines in its class manage to outshrink the Vaio Y: MSI’s MacBook Air wannabee, the X340, measures only 0.78 inches thick and weighs only 2.9 pounds, while Acer’s Timeline 3810T manages to hit 3.6 pounds and 0.9 inches thick. Thin and light as the Vaio Y is, it’s not the thinnest or lightest in its class, so buyers wielding postal scales and tape measures may want to look elsewhere for their winner.

Sony seldom steps too far outside the box with the style of its Vaio line, and the Y doesn’t break any rules for the staid Japanese manufacturer. Conservative, but sleek. The all-plastic body doesn’t wrap itself in metal the way many of today’s trendiest notebooks do, but we liked the smooth matte surfaces that taper smartly around the edges, and the classy Vaio stamp on the lid in mirror finish. You’ll also spot Sony’s classic cylindrical Vaio hinge, with a glowing green power button on one end and the DC connector on the other.

The Y-Series chassis feels respectably rigid around the palm rest and keyboard, but the razor-thin display bends like a trampoline when pressing on the Vaio logo. A seam between lid and bezel that you can literally split apart with a fingernail further cheapens impressions.

The Vaio Y offers up all the usual connections considered standard in its class, including three USB ports (two on the right, one of the left), microphone and headphone jacks, an Ethernet port, SD and Memory Stick Pro Duo card readers, and both VGA and HDMI outputs. Folks with camcorders and external hard drives will also be pleased to find a FireWire 400 port for speedy file transfers. Lastly, you’ll find an ExpressCard/34 slot for expansion.

Sony has been on board with chiclet keyboards since before most of the buying public even knew the term “netbook,” so it should come as no surprise that the Y-Series gets the same island-style treatment. As lame and flat as this arrangement can sometimes be, the keys on the Vaio Y Series actual dip enough with each stroke for a decent “click,” exhibit very little wiggle, and spread out enough to allow us to type with no learning curve to speak of. The biggest adjustment will likely be the slightly compressed row of F-keys up top, which don’t see much action anyway.

Sony doesn’t waste a centimeter of space around the oversized Vaio Y Series trackpad, which sprawls out on the palmrest like Shaq on a twin-sized mattress. It’s big, lightly recessed, and easy to dart a finger across without snagging, making it just as perfect a pointing device as the one on the CW, but with clackier buttons that don’t dive down quite as much. Although it supports multi-touch, the Synaptics drivers that came preinstalled didn’t allow us to use our favorite gesture – two-finger scrolling. Only motions like pinch-to-zoom and two-fingered swipes for forward and back were supported.

The Vaio Y series sports a 13.3-inch glossy LCD with 1366 x 768 resolution, offering a wide plot of virtual acreage packed into a relatively small physical space. True to form, it looks razor sharp and never exhibits any ghosting or blurring during fast-motion video. It also offers a respectably vibrant color palette and enough brightness to make an impression indoors and be legible outdoors, even if the gloss finish does work against it in that regard. Unfortunately, like a lot of consumer notebooks, it also only cranes back to 45 degrees from flat, which can be troublesome in tight quarters.

A thin speaker grille above the keyboard hides the Vaio’s built-in, up-firing speakers, which seem like they should come with a “Librarian Approved” label to indicate the kind of performance you can expect out of them. Even at full volume, they barely manage to cough out enough sound for listening in complete silence, and the slightest din of background noise will have you reaching for a pair of headphones. We’re talking barely-outperform-an-iPhone volume here, and although we can mercifully say they sound a much clearer and listenable at that volume, you’ll get the same lack of bass.

Why, Sony, why? Although the Vaio Y Series desktop sports only a handful of irritating icons like “Vaio Rewards,” the majority of the bloatware has been shuffled haphazardly onto the Start menu like clutter under a kid’s bed after a hasty room cleaning. Norton Internet Security, Vaio Care, Evernote for Vaio, Free QuickBooks Simple Start Online, the sheer volume of garbage was enough to make us gag a little. A few highlights like ArcSoft Webcam companion actually serve a real purpose – like letting you capture snapshots and video from the included webcam – but for the most part it’s just dozens of inconsistently labelled and often puzzling utilities, trial offers, and other assorted digital debris.

The 1.3GHz Intel CULV processor in the Vaio Y gets the same Intel Core 2 Duo badging as its beefier brethren up top, even though it runs at about half the clock speed. The numbers point to a significant speed difference, but around the desktop and in common, low-overheads apps like Google Chrome and Microsoft Word, most users won’t take all that much notice.

Start pushing the limits with video, and the limitations of the 1.3GHz CULV and integrated Intel GMA 4500MHD graphics pronounce themselves. Video from Hulu and YouTube both played fine up to 480p quality, but YouTube began to exhibit some minor but annoying stutter at 720p, and became unwatchable at 1080p. Updating to Flash 10.1 RC4 occasionally fixes stuttering issues, but left our Vaio Y in the same boat. Downloaded Quicktime trailers in 720p fared slightly better, but still showed just a glimmer of stuttering on slow pans and gradual transitions that made the slightest hiccup noticeable.

Our Sony Vaio Y Series scored 2,691 PCMarks in PCMark Vantage, putting it well ahead of the 2,195 posted by the competing Asus UL30A, but below the 2,823 from Lenovo’s Edge 13. Though it has only a small advantage on paper, the Edge was also able to hand 720p YouTube content more fluidly, translating to a noticeable real-life gain as well.

Boot times rank in a bit higher than average for a Windows 7 machine – one minute, two seconds to reach the desktop, and opening a browser window took another 26 seconds, which is unusually long. In a head-to-head race, the Lenovo Edge would be up and running 23 seconds earlier than the Vaio Y.

Sony claims it can wring seven hours with the screen on full brightness, but we saw more like five with the battery-saving power plan enabled and Wi-Fi on. Why the discrepancy? We suspect Asus’ robust power management suite has something to do with it, but Asus was also able to shoehorn a 5600mAh battery into the UL30A, while the Sony Vaio Y fits only a 4400mAh model. That 27 percent difference almost exactly accounts for the difference between seven and nine hours in observed runtime.

Sony has put an admirably classy finish on the standard thin-and-light formula with the Vaio Y, but if its complexion doesn’t make you swoon, it doesn’t offer too many other incentives to reach for the Vaio brand name. Asus’ UL30a offers a lower price, thinner form factor and better battery life, while Lenovo’s (Intel-powered) ThinkPad Edge is lighter, offers superior performance, and also runs longer. The comfortable keyboard, trackpad and screen do make the Vaio Y a joy to use, but you’ll need to look past a pretty long list of shortcomings to justify paying a premium for them.

Best Apple deals and sales for September 2022
Watch Meta demonstrate full-body VR tracking with just a Quest headset
Best gaming laptop deals for September 2022
Best laptop deals: Get a portable workhorse from $119 today
Best Apple iMac Deals: Get an Apple desktop for $539
Best Dell XPS Deals: Up to $600 off top-rated laptops
IPVanish Free Trial: Try it for a month, no strings attached
Adobe Free Trial: Try Creative Cloud for free
Why AMD doesn’t need to beat the RTX 4090 to overtake Nvidia
Why the RTX 4080 12GB feels a lot like a rebranded RTX 4070
Microsoft confirms Surface event for October 12, Surface Pro 9 expected
How much does the RTX 4090 cost? RTX 40-series buying guide
Hackers may be hiding in plain sight on your favorite website