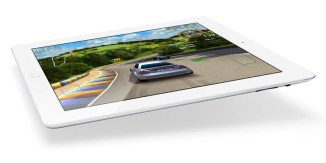 If the results of a survey by online shopping site PriceGrabber are anything to go by, then laptop manufacturers are in for a disappointing holiday season. Tablet makers, on the other hand – especially Apple – will be rubbing their hands in eager anticipation of healthy sales.

The survey asked consumers whether they would rather receive a tablet or a laptop this Christmas. They responded unequivocally, with 79 percent saying they would prefer a tablet. A tablet’s light weight and portability were cited by the respondents as the main reasons for choosing a tablet over a laptop.

And which tablet came top of the wishlist? The survey’s respondents were in little doubt about this one as well, with 83 percent saying they’d like to receive an iPad. Five percent chose the recently released Kindle Fire. So much for Amazon’s device being an iPad killer then, although to be fair, the survey was conducted between October 18 and 26, before the Fire had been released.

Responding to the survey’s findings, PriceGrabber’s general manager Graham Jones said: “Apple has experienced enormous success with its groundbreaking iPad, and our survey data confirms that enthusiasm for the brand will likely remain during the 2011 holiday shopping season.

Jones continued: “We expect that tablets, such as the iPad, will be a clear gift choice for many multitasking, budget-conscious consumers looking for an efficient and convenient computer at a relatively reasonable price.”

We should keep in mind though, this survey doesn’t necessarily indicate the way sales are going to go this holiday season, as it focuses entirely on what people would like to receive. There are plenty of people who’d like to receive a Ferrari this Christmas but it doesn’t mean they’re going to get one.

Amazon’s new Kindle Fire is likely to sell better than this survey indicates as it’ll appeal more to budget conscious shoppers than the pricier iPad – let’s just hope those who receive a Fire instead of an iPad won’t be too disappointed when they don’t get what they’d been hoping for.

What the survey does appear to indicate is that the laptop market is likely to face a tough 2012 as tablets become ever more popular among consumers. What will be fascinating to see is whether the lighter, thinner Ultrabooks will be able to divert consumers’ attention away from tablets to any significant degree next year.