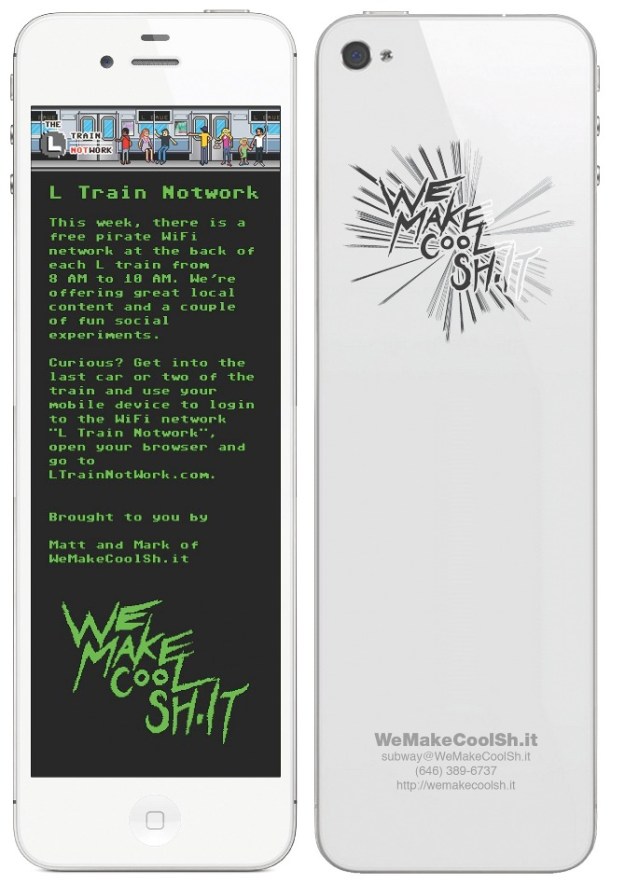 The L Train, New York’s trendiest form of public transformation, has been home not only to the hipsters and artists that ride it, but to a private Wi-Fi network created to better connect its clientele.

Subway Internet access is on the rise everywhere in the world, although the U.S. and Canada have been the slowest to increase this access. But the art collectives WeMakeCoolSh.it and 1441 have taken it upon themselves to inject a little connectivity-meets-innovation into the New York subway system.

The project, dubbed the L Train Notwork, is a digital experiment in using the Web to create interactions in what can be a surprisingly isolated space. And beta testers—commuters who’ve been handed pamphlets over the course of the week explaining the network—have welcomed the exercise in social art, to say the least.

“We’ve seen people chatting with each other, and realizing they are sitting next to one another and striking up a conversation and missing their train stop in the process,” says WeMakeCoolSh.it co-founder Matt McGregor-Mento. “I handed one woman a flier and she started walking toward the train and then stopped in her tracks and turned around and said to me, ‘this is so cool!’”

The technology behind the L Train Notwork is relatively simple. Using homemade, handheld battery-powered Web servers that host Wi-Fi hotspots (all wrapped up in a somewhat discreet bag) for commuters to connect to via mobile Web browser (no app download required). Participants will find content provided by WeMakeCoolSh.it and other creators, news streams that are updated daily, and chatrooms.

And with its “retro Web” user interface and underground allure, the L Train Notwork has been a decided hit—one that’s soon coming to an end. The project ends Friday, when McGregor-Mento tells us there will be a “surprise.” “We’re going to have a surprise at the very end, this Friday in the evening, taking the technology and collaborating with another group. It’s sort of a parting goodbye for our users,” he tells us. “There will be some wonderful, talented people there.”

Despite the fact that the movement has gone viral, the team behind the L Train Notwork is focused on the bigger picture. “We’re definitely interested in new ways of thinking about the idea. We’re going to put a request out to people and brands about what ideas they have that we can do with this—taking the equipment and learning and applying it to different things.”

“But we’re about the idea. Our thing is we’re an idea collective so we work for brands and artists and we create art and commerce. So for us, we’re interested in doing this project again in possibly…totally different forms,” McGregor-Mento says. “You won’t see it on the L Train again anytime soon.”

However the conversation will live on. McGregor-Mento says this week or next week, the group will host an open symposium on the project, revealing what they learned, problems they encountered, and solutions they came up with. Better yet, the technology behind the experiment will be detailed and the lead developer will be there to take questions and offer the code (which will later be available on Github). In-depth case studies capture on video will also be made available. Email WeMakeCoolSh.it (us@wemakecoolsh.it) to stay up to date on the event.

In the mean time, check out this behind-the-scenes look at the L Train Notwork in action.