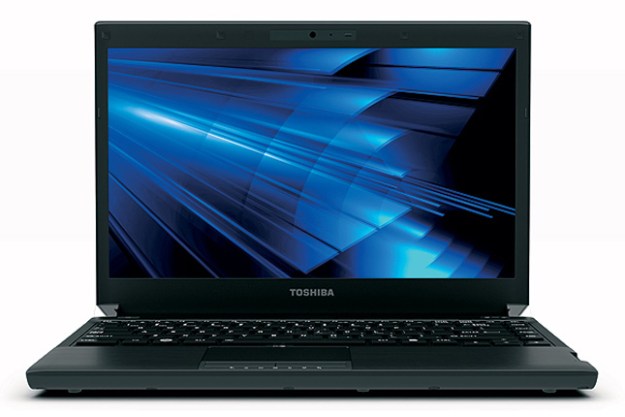 “Toshiba’s Portege R705 laptop is sharp at work, comfortable at play, and affordable enough for everyone.”

Before there were netbooks, Adamos, Timelines or even a MacBook Air, there was the Portege. Toshiba’s long-standing marquee for ultraportable notebooks never achieved the prominence of many of its more fashionable contemporaries, but the business-styled portable has always pressed the bounds of technology. Back in 2007, the Portege R500 actually took the title of the “world’s thinnest notebook with an optical drive.” The R705 continues the thin-and-light, business-centric traditions of its fore-bearers, but with a new emphasis on value; an exotic prepped for the mainstream market. To that end, the R705 is neither as thin or as light as the old R500, but Toshiba’s “no-compromises” 13.3-inch portable still manages to make very few for the price, producing an excellent value for budget-conscious consumers.

Despite its netbook-worthy 3.2-pound carry weight, Toshiba’s Portege R705 packs a pedigree that’s less Chihuahua and more St. Bernard. That includes a full-speed (not ULV) Intel Core i5 processor, 4GB of memory, a 500GB hard drive and a 13.3-inch screen with 1366 x 768 resolution. The machine also supports Intel’s WiDi wireless HD streaming technology, meaning it can push 1080p video to a remote monitor with an adapter like Netgear’s Push2TV.

Throw in an Radeon or GeForce GPU and you would have a certifiable gaming machine, but Toshiba omits the graphics muscle in favor of the lower weight and longer battery life from Intel HD graphics, leaving the Portege leaning more toward the coffee-and-suit demographic than the Mountain-Dew-and-t-shirt crowd.

The styling, smartly enough, aligns with those conservative sensibilities. Unlike Toshiba’s occasionally gaudy Qosmio gaming notebooks, the Portege reverts to clean lines, matte colors (an inky navy blue on the lid) and a complete absence of neon anything. The magnesium alloy chassis gives it a rigid feel that says it’s made from metal, rather than plastic plastered with cut-apart soda cans like some of the budget notebooks sporting the brushed-aluminum look. The only exception comes from the lid, which lacks the rigidity of the chassis and flexes significantly under a firm press.

Don’t confuse solid-feeling with heavy, though. Spreading 3.2 pounds across a footprint this big almost makes the R705 feel almost hollow. With the lid open, you can grasp both front corners between thumb and forefinger and lift it effortlessly. At just one inch deep, no one will confuse it with a MacBook Air, but it still looks slim and slides into a crowded backpack or messenger bag easily thanks to tapered edges.

Though not outfitted for every imaginable scenario like business ‘books with four-digit price tags, the Portege offers no shortage of inputs striping the sides of its slender chassis. The left side offers both VGA and HDMI video outputs, along with both a USB 2.0 and combined eSATA-USB port for accessories. A dainty power cable connects at the far back, connected to a petite power supply that’s little bigger than what you might find with a standard netbook. The right side includes dedicated microphone and headphone jacks for analog sound, plus an Ethernet jack, another USB port, and perhaps most impressive, a DVD drive, which has become a rarity on notebooks this light. The Portege also includes an SD card reader notched into the right-hand side of the palm rest, an odd-but-practical location that actually makes it easier to pop cards in and out without leaning over to find the slot.

True to its business roots Toshiba has gone light on the bloatware with the R705 – you won’t find any eBay links on the desktop. But in the name of convenience, you will find a heavy-handed smattering of preinstalled utilities. Toshiba’s hard drive protection, for instance, will warn you every time you so much as jostle the notebook that the hard drive head has been docked for your safety – but after 10 alerts in five minutes, any rational user will click the box to permanently disable this message. It’s almost like Toshiba left it enabled just to let us know it’s even there.

Perhaps a bigger irritation is Toshiba’s webcam dock, which peeks out from the side by a few pixels at all times and happily vaults out to greet you with options for settings, effects and facial recognition whenever you dare wag a cursor too close to the edge of the screen. We were happy to have the utilities, but puzzled by the prominent positioning. It’s as if Toshiba expects you to want to view different novelty frame options (heart, stars or bubbles?) at any time within seconds.

Toshiba Book Place and Toshiba Bulletin board both hang unobtrusively enough on the bottom dock, but both of them nagged us incessantly to update with the first run, and neither provided enough utility to make us happy we sat through the installers.

We might consider the entire software suite scrappable if not for Toshiba’s redeeming Eco Utility, which intelligently cinches down on notebook performance to wring extra minutes from the battery. Every notebook has something along these lines, but we we liked the instant graphing, real-time watt consumption, and the hard button above the keyboard Toshiba has tied it to, which flicks eco mode on and off near instantly.

You don’t carve an ordinary notebook down to an ultralight without making sacrifices, and typically, that means subbing an ultra-low-voltage (ULV) processor for the brawny, full-power versions found in chunkier notebooks. Toshiba makes no such swap. The Intel Core i5-460M chip in the Portege runs at a respectable 2.53GHz and delivers performance to match, helping the Portege R705 return a PCMark Vantage score of 4,850.

While reasonable, that’s a bit short of the 5,783 PCMarks we saw returned from HP’s EliteBook 8440p, another Core-i5-powered business notebook. In practical terms, the difference typically works out to milliseconds around the desktop, but some more intense tasks do suffer. For instance, the Portege wasn’t quite up to the challenge of 1080p YouTube video, which played reasonably well but hiccupped every few seconds. The 1366 x 768 screen almost makes this a non-issue, but 1080p output via HDMI and Intel’s wireless WiDi tech do mean you could reasonably bump up against the Portege’s playback limitations when using it as a media machine. Fortunately for Toshiba, more common codecs like H.264 played back fine in 1080p, meaning you could still expect to push high-def video to a TV without slowing it to a chug.

Boot time for the humble PC is good but not great: It reaches the desktop in about a minute, but Toshiba’s preinstalled apps will keep it from opening a browser window for another 15 seconds while the system rushes around loading them.

Obviously, gaming isn’t much of an option on the Portege without a discrete graphics card, but Intel HD graphics can handle most 2D and online games without issue.

Toshiba’s slim, LED-backlit LCD musters above-average brightness and contrast for a display in this class, but like most notebooks these days, it hides beneath a glossy layer that’s prone to picking up sunlight and reflections that can obscure the image in the wrong lighting. It’s more a distraction than a barrier to usability, though; in the car and beside massive office windows, text remains readable. Colors look vibrant, if a little on the cold side out of the box, but Intel’s integrated graphics drivers make it easy enough to tweak to taste. Resolution of 1366 x 768 is about standard for a screen this size, short of the 1440 x 900 you can find on a MacBook Air, yet still totally adequate for most tasks short of side-by-side browsing.

Unlike many business machines, which get screens that yawn open until they lie flat, the R705 maxes out at 45 degrees from vertical. Travellers may miss the extra flexibility in cramped airplane quarters, but the current arrangement works for 99 percent of computing, and we give Toshiba credit for the sturdy hinges that keep the screen from wobbling or drooping.

For its size, the Portege actually manages to throw some impressive sound. For most reasonably quiet settings, listening to a YouTube video or TV show on Hulu with the included speakers rather than digging out your ear buds is a perfectly viable option. Is it utterly devoid of any bass? Absolutely, but that’s par for the course, and the volume impressed us for a 13.3-inch book.

Toshiba gets it. After watching PC makers ignore Apple’s luxuriously sized notebook touchpads for years, we’re thrilled to see others finally taking note, including Toshiba with the R705. The matte black touchpad measures nearly 4 inches diagonally, gobbling up every smidge of space between the keyboard and front edge of the notebook. That makes it easy to locate, and even easier to navigate on, especially with multi-touch gestures like two-fingered scrolling enabled by default. The only fault comes from the buttons, which sport a dark chrome finish that’s prone to fingerprints, and make a startling click and clack on pressing down and releasing that’s sure to irritate a few roommates and fellow Starbucks customers sipping lattes as adjacent tables.

In contrast to the vocal track pad buttons, the Chiclet-style keyboard produces barely a whisper from quick typing. The design does leave it with shallower keystrokes than we typically prefer, but we liked the broad, spread-out keys and stiff-feeling keycaps. Just make sure to keep a lamp on: Unlike business notebooks, which typically offer an LED light, and high-end consumer notebooks, which typically offer backlit keys, the R705 offers neither, leaving customers quite literally in the dark when it comes to after-hours typing.

Toshiba claims eight hours of battery life from the six-cell, 66-watt-hour battery included with the R705, but as with most notebooks, we never got there. With brightness up to a readable 80 percent or so and Wi-Fi enabled, you can expect more like an honest 4.5 hours to 5 hours. While well short of Toshiba’s carefully massaged estimate, we feel that’s totally reasonable for a machine with this form factor and power.

Business up front, party in the back. It’s an apt description for the R705, but throwing it in with mullets just feels wrong, so let’s call it a solid pair of khakis instead. Sharp at work, comfortable at play, and affordable enough for everyone. With the R705, Toshiba succeeds at bringing the build quality, power and no-nonsense styling of machines formerly reserved for business elites down to the masses, without clipping the essentials. Most consumers probably won’t even notice the few concessions quietly built into the Portege, making it a steal beside many of the shoddy plastic bargain ‘books it will share shelf space next to. At $800 on the street, comparable to many feeble, ULV-powered machines, the Portege manages to pack a wallop without doing the same to your wallet.