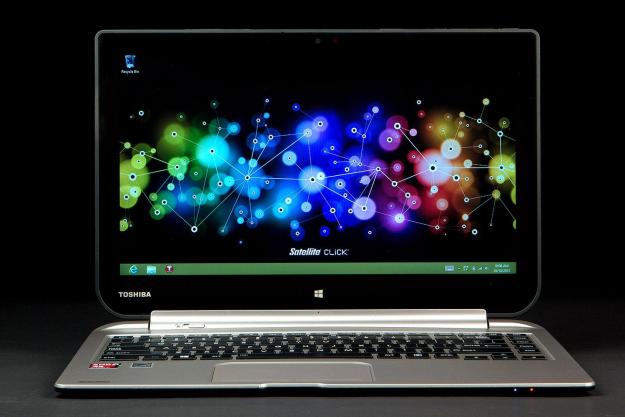 “While the $599 Click is an attractive detachable notebook, its performance is awful when compared with similarly priced systems. Also, the second battery failed to work in either of our review units.”

It’s no secret that PC sales are mired in a lengthy slump, while smartphone and tablet sales continue to climb. With that in mind, it’s easy to see why PC makers are focusing on making convertible devices like Lenovo’s IdeaPad Flex and detachable designs, like what you’ll find with the HP Split x2. In theory, gadgets like these offer the tap-friendly functionality of a tablet with relatively light weight designs and the productivity prowess of a traditional laptop with a keyboard when you need it.

But in reality, dual-function laptop/tablet designs are tricky. Their complicated hinges generally make them more expensive than traditional laptops. And, particularly with detachables, weight is often an issue.

Toshiba attempts to overcome one of those hurdles by equipping the Satellite Click with an AMD A4 “Tamash” low-power processor instead of an Intel CPU. This gets the Click’s price down to an appealing $599 (exclusively at Best Buy), while also eschewing the need for a fan, resulting in a dead-quiet device that also stays fairly cool even under load.

But the Click is still quite heavy, both as a tablet alone (2.81 pounds), and with the keyboard in laptop mode (4.84 pounds), which adds a second battery and a USB 3.0 port. The problem is, the battery in the keyboard base simply didn’t work. We even asked for a replacement from Toshiba, and that one didn’t work either.

Second battery issue aside, the device’s performance simply can’t keep up with competing Intel-powered devices which really don’t cost that much more.

Ultimately, the Satellite Click’s low price is the system’s main selling point, but $599 isn’t all that cheap when the HP Split x2 can be had for $100 more with a 128GB SSD and a 500GB hard drive. And while the IdeaPad Flex 14’s screen isn’t detachable, it does fold into a tablet mode, and weighs about a half pound less than the Click and the Split x2, despite having a larger screen.

Do the Toshiba Satellite Click’s IPS screen and quiet nature make up for the system’s performance failings?

A solid hinge and nice-enough aesthetics

With its brushed-aluminum back and aluminum keyboard tray, the Satellite Click doesn’t look or feel like a budget system. Aside from that, there’s also nothing that really stands out about the system’s looks—unless you count the six (easily removable) stickers.

Aside from its aluminum back and keyboard tray, the Satellite Click’s aesthetics don’t really stand out.

The Chiclet-style keyboard is a mixed bag, offering a roomy typing experience, but it suffers from noticeable flex. Key travel is a bit shallow for a system this thick and the keys generate a considerable amount of noise when typing. There’s also no backlight here, although that’s forgivable, given the system’s price.

At 4.5 inches diagonally, the Toshiba Satellite Click’s touchpad is fairly large for a 13-inch device, and worked well enough in our testing to not elicit serious complaints. Instead of dedicated buttons, the bottom of the Click’s touchpad sports a clicker, which we find to be a bit stiff.

Port selection isn’t great from a laptop standpoint. On the right edge of the upper tablet section, there’s a volume rocker, headphone jack, a Micro HDMI port and a microSD card slot. On the left edge sits a power jack and the power button.

On the lower keyboard section, you get a second power jack on the left side (so you can charge either the tablet or the tablet and keyboard batteries together), and a single USB 3.0 port on the right side. We’d prefer to see a second USB port here or a full-size SD card slot. Or both.

This screen isn’t worth screaming about

The Satellite Click’s screen wields an IPS panel, which translates into terrific viewing angles, making it easy and enjoyable for groups of people to crowd around the Click and binge-watch Breaking Bad reruns. However, the 1,366×768 resolution is pretty low for a 13-inch tablet.

Additionally, while the screen generally looks good, with deep blacks, the panel was only able to produce 65% of the sRGB spectrum in our testing. Though that’s a bit better than the 59% put out by the Lenovo Flex 14, its generally below average. We don’t recommend doing any serious image editing on this screen.

Audio output is better, at least when the screen is docked with the keyboard base. The speakers, which are perched on the keyboard’s underside, are surprisingly loud and don’t sound overly distorted even at maximum volume. Undock the screen though, and you’ll be dealing with the speakers that are built into the tablet. They’re quiet, even by tablet standards.

The Toshiba Satellite Click is powered by an AMD A4-1200 processor which runs at 1GHz, an unimpressive number. There is a silver lining though; because this processor isn’t exactly a powerhouse, it runs so cool that it doesn’t generate much heat, which means that it doesn’t require a fan to cool it. The downside is that performance is nowhere near what you’d expect even from an Intel Core i3 chip from last year. You do get a 500GB hard drive with the Click and an adequate 4GB of RAM though.

In anecdotal testing, the system handled basic tasks like Web browsing and document creation without stuttering, although apps sometimes took longer to load than we’d like. But really, considering its low-power AMD A4-1200 processor, you’d best stick with basic tasks if you’re using the Click.

Though we liked its IPS display and the aluminum chassis is better than we expected, the Click’s performance woes and battery issues hold it back.

On 3DMark’s mid-range Cloud Gate graphics benchmark, the Click’s score of 989 was significantly lower than most modern systems we’ve tested. The Core i5-powered Lenovo Flex 14 scored 3,683 on the same test. Only Samsung’s ATIV Book 9 Lite, which is also AMD-powered, had a similar showing of 1,186 on this test. Graphics are generally AMD’s strong suit.

The Click doesn’t do any better on the CPU front either, managing just 799 in our 7-Zip test, while the Core i5 Lenovo Flex scored 7,087 when we through this benchmark at it. Most modern mid-range and budget-priced laptops we’ve tested manage at least above 5,000 on this benchmark. The Click’s score lags far, far behind that.

While the AMD chip here likely matches up better with Atom-powered devices like Acer’s recently announced W4 8-inch tablet, that device is priced at $330 (sans-keyboard). Considering the Click’s $599 price, its benchmark performance is hard to swallow, given you can get a much more powerful laptop or convertible with a Core i3 chip for about the same price.

A consolation prize for the Click, though, is that it doesn’t generate that much heat, even when its working overtime. Under full load, temperatures topped out at 96.7 degrees, and that’s behind the screen, near the top, where the Click’s components are housed. The bottom of the system stays pleasantly cool since no internal components are stored there that would generate any heat to begin with.

As we said up top, we were unable to get the system’s dual batteries (one in the tablet and one in the keyboard base) to function properly. Windows failed to recognize the keyboard’s battery in our first review unit, which showed up as “Not present.” We crossed our fingers, hoping this was just a fluke, and asked Toshiba for a replacement Satellite Click, which they quickly sent.

Unfortunately, after unboxing the second Satellite Click and powering it on, that unit suffered from the same missing second battery issue.

Of course, we can’t say for certain how widespread this issue is. We strongly suggest that if you do grab the Toshiba Satellite Click at Best Buy, make sure the keyboard’s battery is working before you leave the store.

While we couldn’t test the system with both batteries and were thus unable to get a true sense of the Click’s longevity, we were at least able to test the battery life of the tablet itself, which turned out to be pretty short. In our heavy load Battery Eater test, the Click tablet lasted 2 hours and 21 minutes. That’s not far behind the Lenovo Flex 14’s time of 2:34 on the same test, but when we switched to the less-demanding Reader’s Test, the Click lasted only 3 hours and 26 minutes, while the Core i5-equipped Flex lasted a much longer 8:41.

At a quick glance, the Toshiba Satellite Click seems like an intriguing low-priced, attractive detachable best fit for basic tasks. For what it’s worth, the Click certainly sports aesthetics that are much more attractive than what we typically see in this price range, and we’d take the system’s mediocre keyboard and touchpad for text input over an on-screen keyboard any day.

However, the Click simply has too many other things working against it for us to recommend it to anyone. The second battery didn’t work, with the unit we originally got or the replacement we asked Toshiba for. The longevity of the tablet itself is also so short that you’ll have to recharge it every few hours. Then again, considering it weighs nearly three pounds without the keyboard, you probably won’t want to put it too far away from the charger anyway.

And then there’s performance which, while good enough for surfing the Web and writing emails, lags very far behind the Intel Core i chips found in laptops and convertibles in the same price range as the Click. If Web surfing and writing is about all you need from your device, you could save yourself a lot of money by opting for an Android tablet and a Bluetooth keyboard, or choose a low-cost Atom-based Windows device like Acer’s W4, or the Asus Transformer Book T100T, which starts at $349 and comes with a keyboard that’s better than the one found on the Click. Alternatively, Lenovo’s Flex 14 currently starts at $479 for a Pentium-based model, or $569 for a Core i3 version. Both are much more powerful than the AMD chip found in the Click.

With all these lower-priced alternatives, it’s hard to argue that the Satellite Click is a good value, even if you overlook some of its other serious issues.