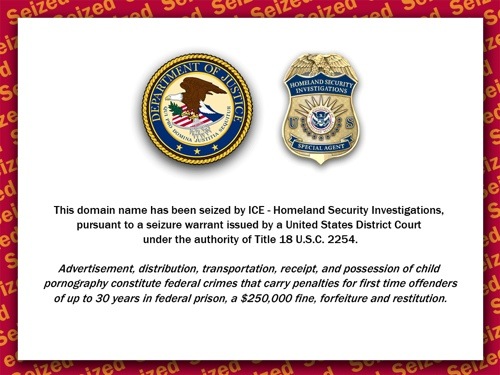 Earlier this week, the Department of Justice and the Department of Homeland Security announced the seizure of 10 domains reported to be involved in child pornography and counterfeit goods. What the government didn’t announce is that “Operation Protect Our Children” also resulted in the closure of around 84,000 seemingly innocent websites.

The mix-up occurred after the domain mooo.com, the most popular shared domain at free web service provider FreeDNS, was seized last Friday, resulting in the closure of the some 84,000 subdomains associated with the site.

The seizure meant that visitors to the affected sites were greeted with a troublesome banner that read, “Advertisement, distribution, transportation, receipt, and possession of child pornography constitute federal crimes that carry penalties for first time offenders of up to 30 years in federal prison, a $250,000 fine, forfeiture and restitution.”

FreeDNS responded with a statement on its website: “freedns.afraid.org has never allowed this type of abuse of its DNS service. We are working to get the issue sorted as quickly as possible.”

It took nearly two days for some of the banners to begin disappearing and for the sites to begin reverting back to their original states. However, because of the nature of DNS entries, it took another several days for the sites to be completely restored. All the while, site owners had to bear the stigma of having been implicated in child pornography — especially troubling for the websites of small businesses.

On Friday, the government celebrated the seizures of the 10 actually problematic domains in a press release. “For all its positive impact, the Internet has also unfortunately created a new way for child predators to commit their inexcusable crimes,” said Lanny A. Breuer of the DOJ in a statement. “The production and distribution of child pornography wreak havoc on innocent lives. With these domain seizures, we are taking our fight against child pornography to websites that facilitate the exchange of these abusive images.”

The statement didn’t mention the 84,000 innocent sites that were closed. It’s not yet clear how the mix-up occurred nor is it clear if website owners will compensated for business lost due to seizures.