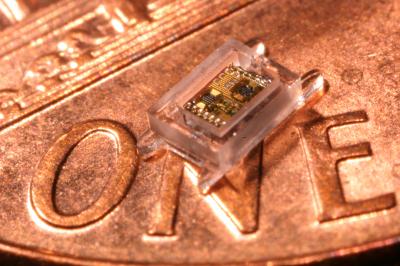 It’s no bigger than the “N” on a penny, but powerful enough to monitor the health of a glaucoma patients’ eyes. Researchers say it could one day lead to “ubiquitous computing” through wireless sensor networks that could monitor, well, just about anything you can think of.

Earlier this week, scientists and engineers from the University of Michigan unveiled what they believe is the world’s first millimeter-sized computer. It’s just over one cubic millimeter, but large enough to feature an ultra low-power microprocessor, a pressure sensor, memory, a thin-film battery, a solar cell and a wireless radio with an antenna —  all that on a device that could fit on a pen tip.

“When you get smaller than hand-held devices, you turn to these monitoring devices,” said professor David Blaauw of the University of Michigan in a news release. “The next big challenge is to achieve millimeter-scale systems, which have a host of new applications for monitoring our bodies, our environment and our buildings. Because they’re so small, you could manufacture hundreds of thousands on one wafer. There could be 10s to 100s of them per person and it’s this per capita increase that fuels the semiconductor industry’s growth.”

Although such a tiny computer has an endless variety of uses, its first real test may be in medicine. At the International Solid-State Circuits Conference (ISSCC) in San Francisco earlier this week, researchers unveiled an eye pressure monitor designed to continuously track the progression of glaucoma, a disease that can lead to blindness.

The eye monitor is intended to be implanted directly into a patient’s eye and to take readings every 15 minutes. The battery is charged through a minuscule solar panel that requires only 10 hours of indoor light or 1.5 hours of sunlight per day. The computer has enough storage capacity to hold a week’s worth of information. Researchers expect a commercial version of the eye monitor could be available within the next few years.

Outside of medicine, the device may be one day used to track pollution, perform surveillance , monitor structural integrity or to “make virtually any object smart and trackable.” The researchers are currently working on refining the device’s radio and antennae to make it even more energy-efficient — and maybe even smaller.