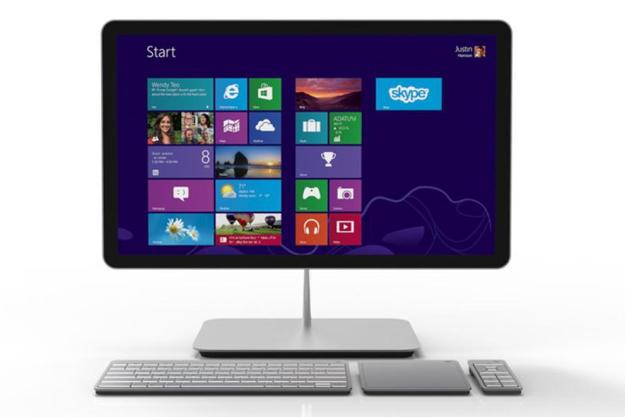 “A combination of poor performance and high price take away from the entertainment value of Vizio’s CA24T all-in-one.”

Vizio is one of the newest players in the North American computer market. In many ways, the company is following in Samsung’s footsteps by using its existing home theater business as a launch pad into other areas. Press releases from Vizio repeatedly boast of the company’s entertainment chops, and all of the company’s computers offer high-resolution displays.

Launching a new brand of computer is no easy task, however, and the first Vizio models (launched last year) didn’t receive rave reviews. Undeterred, the company struck back with new laptops and desktops. We’ve already reviewed the new Vizio Thin+Light Touch, and now it’s time to give the CA24T all-in-one a go.

Like the Thin+Light, this all-in-one doesn’t have any particular preference for AMD or Intel processors. Our review unit arrived with an AMD A10-4600M APU, but consumers can also grab this PC with an Intel Core processor, if desired. The model we tested also came with Radeon graphics (bundled on the same die as the CPU), 8GB of RAM, and a 1TB hard drive.

The spec sheet looks well-rounded, but Vizio wants a cool $1,280 for even this entry-level model, and the Core i7 version starts at $1,500. That’s premium pricing, which puts this rookie in direct competition with veterans like the Dell XPS One and Lenovo A-Series, among others. Can the CA24T win an upset?

Though attractive, Vizio’s design is a bit confusing at first glance. The system comes with a squat silver subwoofer, which we mistook for a miniature system tower. In fact, the subwoofer only houses the power supply; all the other components are hidden in the display’s inch-tall stand. This approach gives the CA24T a simple yet futuristic style reminiscent of Lenovo’s A720.

The thin, chrome display stand appears immobile at first glance, but a hidden hinge allows for movement on the vertical axis. There’s no height or swivel adjustment, however, which somewhat compromises function. An ergonomic viewing position is difficult to achieve without moving the entire computer.

All connectivity is found flanking the stand’s base, which also contains most of the hardware. Four USB 3.0 ports, eSATA, HDMI-in, HDMI-out, Ethernet, and a headphone/microphone jack are standard. While this is a good selection, the system’s design places a thin metal lip above the ports, which makes them more difficult to access than they should be.

An average display, but great sound

Vizio is known by most for its televisions, and the company plays up the angle while pitching its products. Naturally, we expected a great display. The CA24T’s 1080p touchscreen is, unfortunately, just average.

Good audio quality combined with HDMI-in makes the CA24T usable as a television as well as a PC.

The display can render 94 percent of the sRGB gamut in our test suite, which is fine, but other areas of the benchmark are less complimentary. Overall, the Vizio’s performance only ties HP’s Spectre One and falls well short of the Dell XPS One, Lenovo Horizon, and Acer Aspire U, all of which have deeper black levels, higher contrast, and greater maximum brightness. Subjectively, the lack of contrast results in a washed-out look, and colors heavily lean towards blue.

What this computer lacks in visual quality it makes up for with thumping audio that comes from both the internal speakers and the external subwoofer. Sound staging is still an issue, as is the case with all all-in-one PCs, but the CA24T at least offers deep bass and a clear mid-range. Good audio quality combined with HDMI-in makes the CA24T usable as a television as well as a PC.

Dual-core performance from a quad-core processor

Our review unit offers the AMD A10-4600M processor. On paper, this quad-core APU seems like a real power-house, but benchmarks turned in disappointing performance. SiSoft Sandra’s Processor Arithmetic benchmark reported a score of 27.6 GOPS, and the 7-Zip benchmark came to a total of 7,982 MIPS. These numbers are no better than an average Ultrabook with an Intel dual-core processor.

PCMark 7 reached a score of 2,045, which is one of the lowest scores we’ve recently recorded from an all-in-one PC. The massive 1TB mechanical hard drive, though certainly not short on storage, serves as a drag on the system’s responsiveness. We often noticed a short lag between double-clicking on an app and seeing it load.

With processor and storage system lagging, this Vizio has one last chance at redemption: gaming. 3DMark reached a score of 4,076 in Cloud Gate, and 794 in Fire Strike – figures that represent a system capable of playing most modern games at 720p resolution and medium detail.

There’s just one problem. The numbers we received from Haswell’s Intel HD 4600 graphics chip exceed these results. That’s not to say Intel’s integrated graphics processor is the better choice, because AMD does provide better drivers, but consumers should know that the Radeon brand name doesn’t always translate to “gaming powerhouse.”

Vizio ships its all-in-one with a full complement of peripherals, including keyboard, touchpad (rather than mouse), and a remote control. While shipping so much is appreciated, quality issues detract from this bundle’s value.

The keyboard is the worst of the bunch by far. Small, cramped, and flat, this peripheral is plagued by poor key travel and a lack of tactile feedback. The tiny remote suffers similar issues, leaving only the touchpad free of functional flaws.

Quiet as a mouse

Entertainment systems need to be quiet because when they’re not, they distract from the very media they present. Fortunately, Vizio’s all-in-one keeps noise to a minimum. Though a fan is audible during idle use, it wasn’t loud enough to register on our decibel meter. Putting the system through a processor and 3D graphics stress test increased fan noise to only 43.5dB, which is about two decibels below the category average.

Power tests held no surprises. The CA24T consumes about 38 watts of power at idle with the display at maximum brightness, and it consumes up to 67 watts at load. These figures are almost identical to other 24-inch all-in-ones we’ve reviewed, such as the HP Spectre One.

Vizio’s all-in-one makes a good first impression, but there’s little substance holding up the CA24T’s premium façade once the sleek aesthetics wear off. The display is average at best, the bundled peripherals look and feel cheap, and the elegant chrome stand offers minimal ergonomic adjustment.

By far the biggest problem, however, is the system’s AMD processor. The A10-4600M, a quad-core part, struggles to keep up with Intel Core i5 dual-cores in our performance benchmarks. This might be excusable if 3D performance was great, but it’s in fact middling at best, and not up to the task of playing all modern games at the display’s native resolution.

Then there’s the price. $1,280 isn’t outrageous for an all-in-one, but there are many competitors (like the Dell Inspiron One and Samsung’s Series 7 all-in-one) that offer better performance at around the same price. Jumping to the Core i7 model might solve the performance issue, but it also puts the CA24T’s price near the Dell XPS One, which is still king of the all-in-one hill.

Vizio’s vision has out-paced its execution. Clearly, the company wants to play in the same league as Apple, Dell, and Lenovo, and Vizio priced the CA24T accordingly. But this all-in-one is, frankly, not up to par.