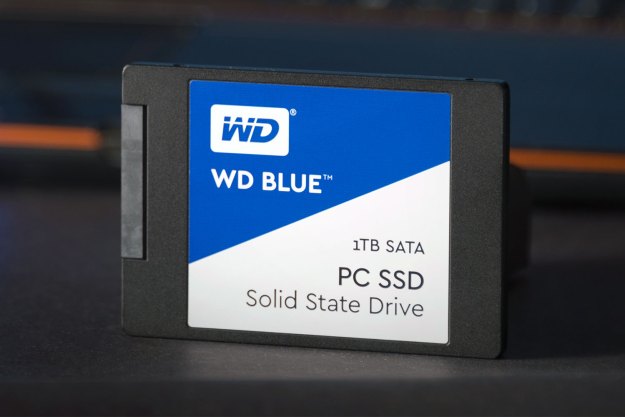 Western Digital has long been the gold standard for hard disk drives. Ask any PC enthusiasts what hard disk to buy, and they’re almost certainly going to point you towards a WD Green or Blue. This reputation is not due to the company’s cutting-edge hardware – after all, hard disks are old-school. Instead, the company earned its goodwill through many years of building affordable, sensible, reliable drives.

Despite that, the company was caught flat-footed by the rise of solid state drives; its expertise in spinning disks didn’t translate to flash memory. Western Digital bought SanDisk to gain the knowledge it lacked, and now the company has released the fruits of that acquisition – the WD Blue solid state drive.

The WD Blue is not a cutting-edge, PCI Express powerhouse designed to transfer gigabytes of data per second. Instead, this drive is designed to do exactly what Western Digital hard disks did: provide reliable, affordable storage that’s fast enough for most use.

To that end, Western Digital has released this drive with SATA compatibility only. That means it has no hope of competing with PCI Express drives, as the SATA connection doesn’t offer enough bandwidth. The drive is available in either the common 2.5-inch form factor, or as an M.2 drive.

The company has also released the drive in only three, relatively large storage capacities; 250GB, 500GB, and 1TB (we tested the big boy). This sends a clear message – Western Digital wants you to use the WD Blue as your primary storage. Put another way, the WD Blue offers capacities large enough to serve as your only hard drive.

You might expect a 2.5-inch solid state drive to be drab. And, well, it is. The drive’s working class aim results in a simple, plain drive case dominating by a big WD Blue logo. There’s absolutely nothing unexpected about it. Of course, that’s true of the competition, too – very few look like anything more than a thin plastic rectangle.

Speed is clearly a crucial metric for a hard drive, since there are few other features that can define them. Going with a SATA connection puts a cap on what we can expect from the WD Blue, due to the limits of the connection. Still, Western Digital says performance should be near the top of what’s possible from SATA drives.

Well, there you have it. The WD Blue is about as fast as any other mid-range solid state drive that connects over SATA. Aside from the Transcend SSD370’s Crystal Disk Mark read speed, which is a bit low, all of the drives we’ve tested perform comparably by every measure.

This just goes to show the limits of the SATA standard. Modern solid state storage is capable of much more, given the PCI Express standard’s increased bandwidth. For perspective, Intel’s 750 Series solid state drive is about three times quicker than any of those included in our graph.

It’s also much more expensive, and connects only over PCI Express or U.2, a pair of standards that aren’t as common as SATA. Western Digital wants the WD Blue to be a drive anyone can drop into any system. That means sticking with SATA, and tolerating its speed limit.

Western Digital has released the drive with SATA compatibility only.

Every WD Blue drive comes with a three-year warranty against manufacturer defects. This is a common warranty period for solid state drives, and most of Western Digital’s competitors offer the same.

Western Digital also promises an endurance rating of 400 terabytes written. That’s much higher than the Samsung 850 Evo, which only promises 150TB. It’s also much less than the Transcend SSD370, which offers an incredible 1,180TBW.

All these figures are for the 1TB drive of each model line. Smaller drives usually also have lower TBW tolerances. Still, whatever the size, the endurance rating is high enough that a typical user won’t exceed it for at least a decade.

The WD Blue SSD 1TB is the vanilla ice cream of solid state drives. It’s simple, and pleasing, and provides no more or less than what you’d expect. Pricing starts at $80 for the 250GB drive. The 500GB drive is $140, and the 1TB drive we reviewed is $300.

The Samsung 850 Evo and Transcend SSD370, which we also benchmarked for this review, may as well be the same drive – at least in the eyes of an average user. There’s no appreciable difference between them. You’d have to slam them into something like a web server to really start testing the limits of their performance and endurance.

There are some less expensive drives that you might consider, however. The Crucial MX300 is generally $250 for a 1TB model, and is about as quick as the WD Blue. The same can be said of the SanDisk X400, which is $260 for a 1TB drive.

Hard drive reliability is impossible to guess from the basis of a review. With that said, Western Digital’s endurance ratings are towards the high end of its market, so it at least claims to last longer than the competition.

Its performance, meanwhile, should be more than adequate for the entirety of the drive’s life, even if it lasts beyond a decade.

The solid state market is very competitive right now, which has led to a plethora of choice. Western Digital’s first mid-range SSD is competent, but it also doesn’t stand out from the pack.

We think the WD Blue’s price needs to dip lower before it’s the obvious pick. Right now, users who want an affordable SSD for their primary system drive should veer towards less expensive competitors with similar performance.

The best external hard drives for 2022