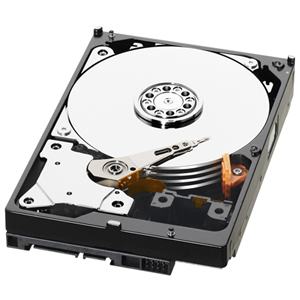 The world’s largest SATA hard drive is now available from Western Digital. On Tuesday, the company announced both 2.5TB and 3TB versions of its Caviar Green drives.

The newest members of the WD family offers 3 or 2.5 terabytes of storage while minimizing the issues PCs tend to have with larger drives – namely, known driver issues with drives over 2.19TB. Both drives use an Advanced Host Controller Interface-compliant Host Bus Adapter to skirt compatibility potential issues with different operating systems.

Although they’re designed for 64-bit systems, they’ll also function with legacy 32-bit systems running Vista or Windows 7, with a few caveats. Western Digital offers a chart spelling out which operating systems will function with the drives and possible limitations. You can’t use them at all in Windows XP, for instance, and such a large drive won’t work as a boot drive in the 32-bit versions of Windows Vista and Windows 7.

To get an idea of approximately how much storage you’re looking at, the 3TB hard drive offers upwards of half a million photo and MP3 files, as well as 360 hours of high-definition video.

Like the rest of the Caviar Green line, the larger drives utilize WD GreenPower Technology to reduce noise and temperature.

The 3TB and 2.5TB external hard drives are available immediately for the competitive prices of $189.99 and $239.00, respectively.

How to clean up your hard drive

MacOS Monterey officially launches, but its biggest features have been delayed