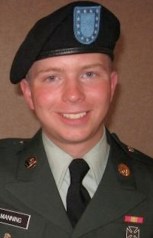 The United States Army has filed 22 additional charges against suspected WikiLeaks whistle-blower Pfc. Bradley Manning, one of which could land him the death penalty, reports CBS News.

The new set of charges, say Army officials, come after a seven month military investigation, which has concluded that Manning, 23, illegally downloaded classified documents from government computers, and passed it off to “the enemy” — i.e. WikiLeaks. In doing so, Army investigators believe Manning “aided the enemy,” an offense that could result in court-ordered execution.

“The new charges more accurately reflect the broad scope of the crimes that Pvt. 1st Class Manning is accused of committing,” Capt. John Haberland, a legal spokesman for the Military District of Washington, told CBS News.

Despite the possibility that Manning could face the death penalty for the charges against him, it’s doubtful that he will. The Army’s prosecution has reportedly told Manning’s defense team that they will not recommend the death penalty — a sentence that is improbable even if Manning is convicted of the crimes for which he has been accused.

Instead, Manning could face a long list of other severe punishments, including life in prison, reduction in rank, dishonorable discharge, and the loss of all pay.

Manning’s court proceedings are currently pending due to a medical inquiry into whether the Army Private’s mental health is good enough for him to stand trial.

Manning was arrested in Iraq in May 2010 on suspicion of having passed classified documents, which include Afghanistan and Iraq war logs, and a massive cache of 250,000 US diplomatic cables, to WikiLeaks.

After being detained in Kuwait, Manning was transferred to a military jail in Quantico, Virginia, where he remains held in a 72-square-foot cell for 23 hours per day.

UK Judge: WikiLeaks’ Julian Assange can be extradited to Sweden
WikiLeaks nominated for Nobel Peace Prize
UK court upholds bail with conditions for WikiLeaks’ Assange
Wikileaks founder Julian Assange gets bail
The best PC power supply for 2023
ChatGPT has a new way to detect its own plagiarism
Samsung Galaxy Book 3 Ultra vs. MacBook Pro 16-inch
The Galaxy Book 3 Ultra is Samsung’s most powerful laptop ever
Nvidia may have another monster GPU in the works, and the price could be outrageous
AMD’s Ryzen 9 7950X3D pricing keeps the pressure on Intel
What is ChatGPT Plus? Everything we know about the premium tier
ChatGPT Plus to bring priority access during peak times — at a hefty price
Usually $3,879, this Lenovo laptop is down to $1,479 today