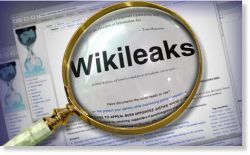 WikiLeaks requires its employees to sign a nondisclosure agreement that prevents them from leaking information provided to the whistleblowing site, reports legal expert David Allen Green in The New Statesman blog. Anyone who discloses any material that is deemed “solely the property of WikiLeaks” faces a penalty of £12,000,000, or about $20 million.

The amount designated in the gag order is based upon “a typical market valuation” for the leaked information in WikiLeaks’ possession. As Green explains, the wording of the confidentiality agreement (PDF) shows that WikiLeaks views “itself as a commercial organization in the business of owning and selling leaked information,” not simply an altruistic rogue entity committed to revealing the undisclosed truths of the world.

The gag order also prohibits the release of “all newsworthy information relating to the workings of WikiLeaks,” details about how the directors of the organization conduct business, and even the leak of the gag order itself. In addition, the NDA stipulates that it can sue anyone within the company that contributes to both “loss of opportunity to sell the information to other news broadcasters and publishers” and “loss of value of the information.”

So far, WikiLeaks has not sold any of the information it has possessed, including the massive cache of US embassy cables, the release of which thrust the website firmly into the world’s consciousness. It did, however, attempt to auction off thousands of emails that belonged to a high ranking aid of Venezuelan president Hugo Chavez. But the deal eventually fell through.

“One suspects that the various brave and well-intentioned people who have provided the leaked information would be quite unaware of — and perhaps horrified by — the express commercial intentions of WikiLeaks, as evidenced by this document,’ writes Green.

Something tells us that whistleblowers won’t be the only ones disturbed the by the information.