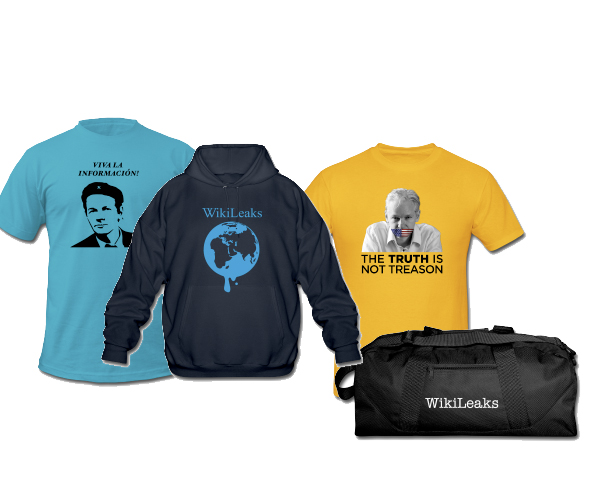 WikiLeaks is trying a new approach to raising money: old fashioned t-shirt capitalism. This month, the organization launched the WikiLeaks Shop offering t-shirts, hats, coffee mugs, duffel bags, iPad sleeves, hats and even a “not so leaky” umbrella. Prices range from $18 for a t-shirt to $60 for a hoodie — shipping not included. Visitors to the site are informed that “all proceedings go directly to WikiLeaks operations.”

And while PayPal and major credit card companies haven’t had such a great relationship with WikiLeaks in the past, they will be more than happy to take your money in exchange for WikiLeaks merchandise.

A fair amount of the merchandise features Julian Assange’s visage, while other products are decorated with slogans like “the truth is not treason,” “Free Assange” and pro-information quotes from George Orwell and Thomas Jefferson. The store is run by German company Spreadshirt AG and has 16 different sites corresponding to countries in Europe and North America.

T-shirts plastered with Assange’s mug are just the latest attempt to cash-in on WikiLeaks and its controversial frontman. In December, Assange revealed that he will be paid $1.3 million in advance to (reluctantly) write his autobiography for Random House and Cannongate Books in the U.K. “I don’t want to write this book, but I have to,” Assange told the Sunday Times in December. “I have already spent £200,000 for legal costs and I need to defend myself and to keep WikiLeaks afloat.” Too bad for Assange that the idea to sell t-shirts didn’t materialize sooner.

There are also two upcoming films based on Wikileaks and its controversial founder. Universal has an Assange documentary in the works that is slated to be directed by Alex Gibney, Academy Award nominee for Enron: The Smartest Guys in the Room and Academy Award winner for Taxi to the Dark Side. HBO is working on another film that may focus on Wikileaks as the group prepares to release a classified video shot from within a U.S. military helicopter.

It’s not clear if the online Wikileaks gift shop will be a big hit, resulting in a much needed cash windfall for the troubled organization. Even the most fashionable of Wikileaks’ supporters may find that t-shirts emblazoned with Assange’s mug to be walking a fine line between fundraising and selling out. One thing is for certain, with the combined costs of running the operation and pending legal battles, WikiLeaks and Assange both could use the money.

Thanks but no thanks: WikiLeaks asks its supporters to stop DDoS attacks