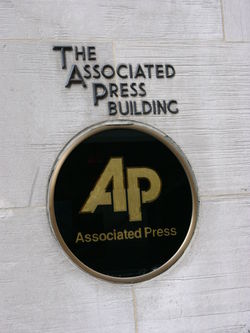 The Associated Press has signed a licensing deal with Yahoo Inc. that gives the news cooperative a steady stream of revenue at a time less money is flowing in from newspapers and broadcasters. The announcement by both companies Monday didn’t disclose the financial terms of the agreement, which allows Yahoo to continue posting AP content on its site. The AP says it is still negotiating to renew its online licensing agreements with two other companies with far deeper pockets, Google Inc. and Microsoft Corp. Google stopped posting fresh AP content on its Web site in late December.

Stung by the AP’s first downturn in revenue in years, AP’s management has said the cooperative needs to make more money from the online rights to its stories, photographs and video as more people flock to the Web for information and entertainment. It’s unclear whether the AP achieved its financial objectives in the Yahoo deal.

Yahoo, based in Sunnyvale, Calif., described the AP as an important part of its efforts to keep its nearly 600 million worldwide users informed. “We look forward to continuing our long-standing partnership with AP for many years to come,” the company said in a statement.

The duration of the new contract wasn’t disclosed. Yahoo has been posting AP content on its site since 1998. Its Web site also relies on other services, including AP rival Reuters, as well as reporters that it employs. The formula has worked well for Yahoo, even as it has struggled in other key areas, such as Internet search and social networking. Yahoo pulls in the biggest U.S. Internet audiences in news, sports and finance, according to the research firm comScore Inc.

The not-for-profit AP finds itself at a critical juncture in its 164-year history because the Internet’s popularity is draining advertising revenue from U.S. print publication and broadcasters, which have been the AP’s traditional funding sources and still account for about 40 percent of the cooperative’s revenue combined.

The ad slump’s ripple effects have prompted the AP to reduce its fees from those outlets and cut its payroll costs by about 10 percent. The concessions to newspapers and broadcasters cost the AP $30 million in revenue last year and a projected $45 million this year. The AP’s 2009 financial statement, which hasn’t been released yet, is expected to show a revenue decline of about 6 percent to roughly $700 million.

Besides pumping Internet companies for more money, the AP also wants more cooperation in its effort to ensure its material isn’t appearing on unauthorized sites. As part of its crackdown, the AP is testing a system that tracks where its stories are being read. Yahoo pledged to enforce “the strictest standards” to protect the AP’s content. Leading up to Yahoo agreement, AP CEO Tom Curley said the cooperative was considering whether to separate its online content into different tiers so exclusive stories might cost more than breaking news reports widely available elsewhere on the Web.

The Yahoo deal doesn’t include such a tiering provision, according to a person familiar with the agreement, speaking on condition of anonymity because of a nondisclosure clause in the new contract. In a statement, New York-based AP said Yahoo “has always recognized the value and importance of original, authoritative news. We are pleased Yahoo and AP will continue that valued relationship.”

Yahoo also has formed a business bond with the U.S. newspapers that own the AP.  More than 800 U.S. newspapers have joined forces with Yahoo to sell more advertising on their Web sites.

By contrast, many publishers believe Google has profited unfairly from their newspapers by drawing upon snippets of their stories to attract more traffic to its dominant search engine so it can sell more of the ads that generate most of its income. And the AP bickered with the Google over how its stories were summarized for several years before finally striking a licensing agreement in 2006.

Google says it helps drive more traffic to newspaper sites and honors any request from a publisher that doesn’t want to be included in its search engine. The company, based in Mountain View, Calif., has said it believes U.S. law allowed it to excerpt AP stories even before it obtained licensing rights.

How to create a new team in Microsoft Teams
Best home internet deals for October 2022: AT&T, Spectrum, Optimum and more
North Korean hackers create fake job offers to steal important data
This dangerous hacking tool is now on the loose, and the consequences could be huge
This powerful student laptop is on sale at Dell this weekend
Hurry! The Lenovo ThinkPad X13 laptop is insanely cheap right now
Image-generating AI Dall-E is now free for anyone to play with
The best motherboards for Ryzen 7000 available right now
HP Omen gaming laptops and PCs have massive price cuts today
We can’t believe how cheap this HP laptop deal is
Best Buy is having a clearance sale on this fantastic 2-in-1 student laptop
Tesla just shocked everyone with its Optimus robot prototype
Best monitor deals for October 2022