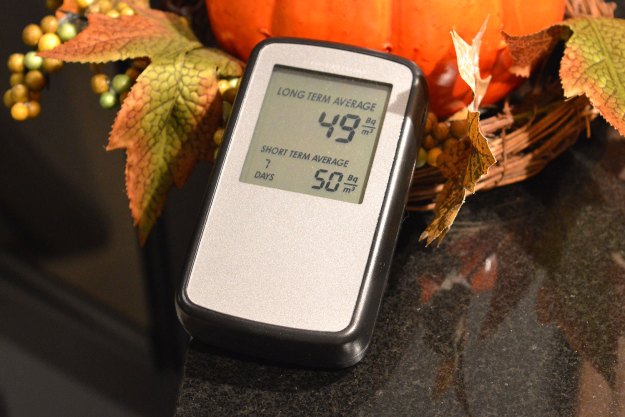 “The Corentium Home is currently the best instant radon detector on the market, able to check multiple areas of your home.”

A few years ago, Digital Trends senior editor Caleb Denison made the case for radon testing in your home. The stats are hard to argue with: The EPA says 21,000 people die of radon-related lung cancer every year, making it the second leading cause of the disease after smoking. Radon is a naturally occurring but toxic gas that is completely undetectable by humans. Whether you live in a house or a condo, you’d be well advised to measure radon levels.

Historically, consumers have had only one option to test radon levels at home: A small charcoal-based kit that must be sent away to a lab in order to get results. Often priced under $50, they are one-shot affairs. That’s what makes the Airthings Corentium Home radon detector such an intriguing product. At $199, it’s a lot more expensive than traditional charcoal-based home test kits, but given its unique ability to take radon measurements in multiple locations and provide real-time as well as long-term readings, we think it’s worth consideration. Here’s what it’s like to use it.

The Airthings Corentium Home makes no apologies for the fact that it is a radon detector. Its simple, black plastic housing and large LCD display give the device a no-nonsense vibe that reinforces the fact that it is, at its core, a scientific instrument. The only two buttons are tiny and recessed in the back, meant to be pressed only on rare occasions when you want to reset the detector or see how many days it has been in use. Besides the microUSB port — which is only there if Airthings needs to service the unit and not meant for users — nothing else interrupts the Corentium Home’s basic body. This unassuming, even boring design is actually a good thing: In order for the device to do its job, you’ll ideally need to leave it sitting on a surface that is as close to the midpoint of a room as possible, which means it will likely be quite visible. The black-and-grey cosmetics of the Corentium Home let it blend into the background, as does its size: It’s about the size of a first-generation point-and-shoot digital camera. There’s small keyhole on the back of the detector for wall-mounting too, if necessary.

Three replaceable AAA batteries (included in the box) power the unit, which Airthings claims should give about two years of continuous use.

It’s worth noting that the radon detector has no alarm feature; it won’t go off – like a carbon monoxide detector – if levels are high, so you should regularly monitor it.

Using the Corentium Home is like using a thermometer. Once you pop in the batteries, it takes about a minute to calibrate and then anywhere from six to twelve hours to gather its first readings. Once that happens, the easy-to-read display provides a constant readout of two measurements: short-term average and long-term average. Both of these count the quantity of radon in the air using pCi/L (Picocurie per liter of air) as their scale, if you buy the U.S. model. Everywhere else uses the more common Bq/m3 (Becquerel per cubic meter) scale.

We were able to check radon levels in multiple locations, and the results surprised us.

If what you want is a very quick sense of radon levels in your home, the Corentium Home has just provided it — faster than any other consumer option.

By the seventh day of use, the short-term average will flash between a one-day and a seven-day reading, and these can be substantially different than the long-term average value. This short-term average reading is what really sets the Corentium Home apart from the conventional charcoal-based units that need to be sent away to a lab. Many factors can affect how radon collects in a room, such as weather, the use of heating or cooling equipment, and seasonality, but a charcoal test kit can’t give you any insights into these fluctuations.

How accurate is it?

Before testing the Corentium Home, we performed a long-term test using a charcoal test kit supplied by AccuStar. It’s a popular home test sold on Amazon. You get the single charcoal test device, a postage-paid envelope to send the device to a New York-state-based lab, plus the results themselves emailed after about two or three weeks. As instructed, we placed the detector in a basement and let it sit there undisturbed for a minimum of 90 days — in fact, we left it in place for 210 days. The result: 63 Bq/m3 — well below the threshold of action recommended by Health Canada of 200 Bq/m3. The U.S. EPA has set a lower threshold of 4 pCi/L (approximately 148 Bq/m3).

After three weeks of letting the Corentium Home sit in the same location, it gave us a long-term average reading of 54 Bq/m3 — 14 percent lower than the AccuStar test. Is that an indication of a problem? We don’t think so. Not only was the test period much shorter, but a daily glance at the short term average readings showed that there were significant fluctuations in radon levels on a day-to-day basis, from 1 Bq/m3 on the low end, to 85 Bq/m3 on the high end. We suspect that a longer test, conducted over the same length of time and time of year as the Accustar would yield very similar results.

A charcoal test is limited by design. You’d need to buy one for every location in your home that you want to test, and we’re guessing that most folks will stick with a single test kit — likely placed in their basement or ground floor. But thanks to the Corentium Home, we were able to check radon levels in other locations too, and the results surprised us: Despite the fact that the highest readings were in the basement, as one might expect, readings on the second floor weren’t nearly as low as we thought, with short-term averages of 30 Bq/m3 and long-term averages of 38 Bq/m3, after six days of data collection. Again, these levels are well below the recommended action thresholds, but it’s worth noting that health authorities say there’s no such thing a safe level of radon — only levels below which your risk of lung disease will make it hard to justify going to extremes to bring them any lower.

While it’s true that the charcoal-based tests are cheaper, and likely just as accurate as the Corentium Home for long-term readings, their disposable form factor means you only get one reading, for one location. That’s a problem because, as Airthings spokesperson Pippa Boothman points out, radon levels are not something you can simply deal with once and be done. Any number of changes to a home can affect radon levels, even something as simple as variations in weather patterns. The notion of having a disposable radon detector is a little like having a disposable CO2 detector – it can’t do its job if it’s not there.

Curiously, despite the emphasis that Airthings places on knowing your short term or even daily radon levels, the Corentium Home doesn’t have any kind of built-in alert function for when radon levels are especially high. But clearly this is something the company thinks should be incorporated into a radon detector: Its new product, the Wave — which is available for pre-order now for the same price as the Corentium Home — is a radon detector that gives you a visual indicator of levels via its tri-color LED (green: good, yellow: temporarily high, red: time to get out of Dodge) and provides full stats via a Bluetooth-connected smartphone or tablet.

The Airthings Corentium Home comes with a one-year manufacturer’s warranty against defects.

The Airthings Corentium Home is a simple-to-use device with potentially life-saving benefits.

No doubt the Airthings Corentium Home’s $199 price will give people pause. After all, the one-time charcoal tests can cost as little as $15, and there’s no reason to think they’re any more or less accurate given enough time for absorption of radon. If your goal is simply to evaluate whether your home has dangerously high levels of radon, these one-and-done tests will do the job and cost very little.

If you like the idea of getting instant results or you’re prone to wondering about mix-ups at a lab you can’t see, you may want to check out the Safety Siren Pro Series3 Radon Gas Detector; it’s the only other consumer-grade reusable radon detector we could find. At $129, it’s a good bit cheaper than the Corentium Home, but there are two potential drawbacks: It’s AC-powered, with no battery option, so long-term readings could be interrupted, and some buyers have complained that the unit must be sent back to the factory (at the owner’s expense) for an annual calibration in order for accuracy to be maintained.

The Corentium Home ships with three AAA batteries which will power the device continuously for two years. The device itself should be able to maintain its accuracy for much longer than that, according to the manufacturer, unless it is exposed to continuously high levels of radon (greater than 140 pCi/L) “over several years.”

Unfortunately, radon is a real health hazard and its effects aren’t detectable until the damage is done. Knowing how much radon you and your family are being exposed to may be vital and require medical attention. Charcoal-based tests should be considered a minimum level of monitoring, which will tell you if you have a severe, long-term problem to address, but they can’t provide ongoing results. Not only will a charcoal test not allow you to test multiple locations in your home, it’s not going to tell you if your remediation steps were effective.

At $199, the Corentium Home can feel like an expense you’d prefer not to take on, but when you consider how many charcoal tests it could replace and its ability to provide daily readings, the value becomes evident. The only thing that gives us pause is the company’s new alert-enabled product with Bluetooth Connectivity. If you want that peace of mind and think you’ll forget to regularly check your radon detector, it might be worth waiting for that model.