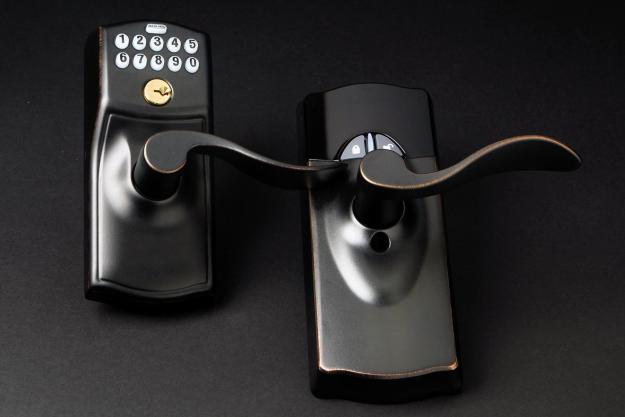 “As a programmable lock, the Schlage model is a pleasure.”

Nothing is allowed to be dumb anymore. Not even home door locks.

A wave of “smart” locks that can be remotely accessed and work with smartphones are hitting the market. And these models aren’t just from Kickstarter neophytes. Established lock companies like the nearly century-old Schlage are offering smart locks.

The $199 Schlage Camelot Residential Electronic Door Lever looks like a standard programmable keypad lock, but it also works with wireless automated home systems. I tested it with the Lowe’s Iris Smart Home system, which is based on the Z-Wave wireless format (there’s also a model of the lock that works with the Nexia Home Intelligence system). The lever lock replaces most standard home front door locks (it only has an ANSI Grade 2 security certification, rather than the superior Grade 1 rating given to typical deadbolts), and it comes in several different finishes, including brass, antique black, and nickel. The keypad lights up with the push of a button, and it’s powered by four supplied AA batteries.

Removing the rickety old lock on my front door took about 10 minutes using a Philips screw driver — and a few gentle taps of encouragement from a hammer to pop the old cylinder out of its hole. The Camelot door lever is specifically designed to replace standard residential door knob locks. It fit snugly into the same space as the old lock and didn’t even require any adjustment of the strike plate on the door frame. Even the handles can be reversed for left- or right-hand door installation.

After inserting the front keypad and lever faceplate, you fasten the back plate with the battery compartment and inside handle onto the back to complete the job. There are two buttons on the back for locking and unlocking; the lever can be set to automatically lock behind you or remain open.

Schlage includes a programming code for the lock that must be punched in, accompanied by a secondary numerical code, to change, add or delete codes. The lock can be programmed with up to 19 different codes, but you don’t have to do any keypad punching. Two preset access codes are included, along with two physical keys should things go awry with the electronic components. The entire setup took me less than 30 minutes.

The mechanical installation turned out to be the easy part.

In larger homes of 2,500 square feet or more, the front door may be far from the wireless connection needed to get the lock online. In my case, the Iris hub was on the opposite side of the house and on the second floor, which turned out to be the ragged edge of wireless connectivity.

To connect the lock with the Iris system and software, you log in to your Iris account online, select the type of device that you want to add, and then punch the programming code into the Schlage keypad to begin pairing with the system. In my tests, the lock registered on the Iris system, but gave conflicting messages. On one page it seemed to be connected, but it had an “unsecured connection” warning, and I was unable to operate the lock remotely.

Most do-it-yourself home automation systems initially pair up a new device with a weak signal, lest the neighbor’s system gain access to your new lock before you’ve had a chance to secure it. The weak connection was not enough to make a proper connection in my home. Fortunately, the Iris hub has a battery backup, which allowed me to unplug it and bring it downstairs next to the lock for the initial pairing…and then run quickly back upstairs and reconnect the hub to the network for the final software setup before it timed out.

Living With the Lock

As a programmable lock, the Schlage model is a pleasure. The lock mechanism is quiet, the keys easily visible, and they light up in the dark when you push the top button. The keys are slightly rubbery, so they have a good, solid tactile feel.

The four-number PINs are also easy to program. I quickly put in a code for my neighbor that he could recall in case of emergency, another for my family, and another to give to guests (which I could delete later without telling them or having to ask for the keys back). All worked as intended.

Forget to give the dog sitter a key? No problem. Just unlock the front door from hundreds of miles away.

Using the Iris Android and iOS apps, I could also see the status of the door and lock or unlock it remotely. It’s a convenient feature should one of the kids forget their keys or a delivery or service person require access.

Unfortunately, to do more with the lock, such as setting timed PINs that expire after a few hours or having the system send you alerts when the door is unlocked, you have to pay a monthly fee for the premium Iris service. It costs $9.99 a month, but includes a wide variety of controls, such as enabling a camera on the system to begin recording every time the door is unlocked or for it to automatically unlock if a smoke detector goes off.

As with many smart home systems, the array of options can quickly become overwhelming. However, I do wish Lowe’s would enable just a couple of more remote control options–such as adding a new PIN access code from the app–to the free service. Conversely, Schlage could create its own free app to supplement some of these features.

During several weeks of testing (and testing, and testing), I eventually received a low battery warning for the lock on the Iris control page. I ignored the warning, much to my chagrin. Within 48 hours I was dealing with one very unhappy family member whose PIN code no longer worked. When the batteries die so does push-button access. That’s when the two supplied keys come in handy.

Most owners won’t be constantly pinging the lock and testing network settings, so the average user should see several months of longer battery life. But when the low power warning does arrive, don’t ignore it.

While it may not be the most sophisticated smart lock available, the Schlage Camelot Residential Electronic Door Lever certainly is easy to install, works consistently, and isn’t needlessly complicated. You do not, for example, require a smart phone to open or close the door. It also works fine on its own as a programmable keypad lock. (Schlage has an excellent keypad model, the FE595, without the wireless networking feature that sells for about $120.)

One thing is certain: Smart locks and automated services offer conveniences that will quickly win converts. Forget to give the dog sitter a key? No problem. Just unlock the front door from hundreds of miles away. Step outside in your shorts to get the paper and the door locks behind you? No sweat. Just punch in the code.

Having a smart lock means you don’t have to be so, well, smart.