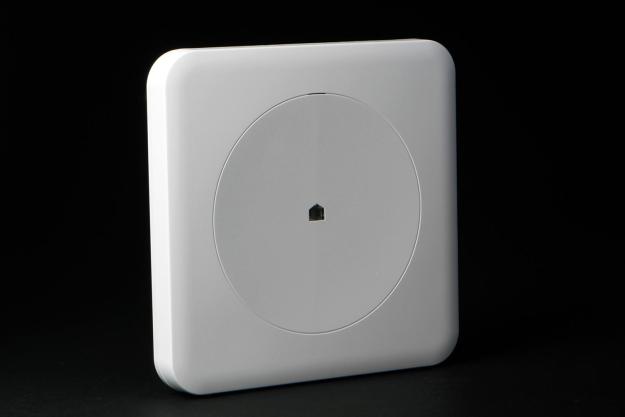 “The inexpensive Wink Hub hides anywhere in your home and shows great promise – but lack of compatibility holds it back.”

The trick with technology has always been a matter of coordination, never more so than in the arena of smarthome products. Wink is yet another contender trying to link the wide world of multifarious, do-it-yourself, connected-home products, from door locks to surveillance cameras to lights, in a single interface. So far, its success is a mixed affair.

We were disappointed at how few devices could be integrated the Wink app.

Backed by partners such as Home Depot, Wink uses an app to connect with devices from brands such as GE, Schlage, and Lutron. For products that can’t communicate directly with the Android or iOS app, there’s the $50 Wink Hub, a standalone router that acts as a bridge between those products and a home Wi-Fi network. There are no monthly fees, and the company claims the system already works with over 60 different products.

The Wink Hub, which is occasionally available for next to nothing as part of various promotional bundles with compatible products, supports several wireless standards, including Wi-Fi, Bluetooth, Z-Wave, Zigbee, and ClearConnect. In theory, that should enable it to work with heretofore incompatible products, such as cameras that use Wi-Fi and thermostats that connect using only Z-Wave. The primary criteria, then, is the number of products it works with — giving consumers the most options — and how simple it is to deploy and operate.

The glossy white Wink Hub has the all the design flourish of a simple kitchen appliance. Standing vertically about the size of paperback book, you can hide it just about anywhere there’s an available power outlet. Unlike some other hubs, it does not need to be plugged into an Ethernet port on a router. This is a distinct advantage; it allows owners to place it just about anywhere it can make a Wi-Fi connection to their home network.

The free Wink app takes you through the process of logging the Hub into your home Wi-Fi network and adding any compatible devices. Two important qualifications should be noted. First, the Hub will not work with 5-GHz Wi-Fi networks, which should not be a major issue for most homes using dual-band routers. The second issue is more serious in terms of security.

The Wink Hub is not able to work with networks that do not broadcast their SSID. This is a basic but significant security issue, since it’s recommended that home networks not entice hackers by broadcasting their IDs. It’s even more of an issue when it comes to smarthome devices, such as cameras and door locks. It’s a rookie programming mistake — one Wink promises to correct with a firmware update “in the next few weeks.”

The rest of the installation was relatively painless. We added a lamp with a GE Link LED bulb (which flashed to acknowledge it was connected), a Dropcam Pro camera, and a Zwave thermostat within a few minutes. Wink also has a barcode scanning option to easily input information on new additions.

Living with the Hub

As straightforward as the Wink installation was, we were disappointed at how few devices could be integrated into its app. For example, while it works with the Dropcam Pro, it cannot control the earlier model. And while Schlage is one of the 15 brands the app and hub work with, it works only with the touchscreen deadbolt lock — not the specific model we had installed.

Wink also does not work with the popular Google-owned Nest products. And although Wink cites Chamberlain’s MyQ remote garage door opener as a compatible product, the Android app did not offer it as an option and the Hub did not see the device.

The company says it has now added support for our garage door opener but did not do so until after our testing was completed. Wink compatibility is clearly still a work in progress.

In spite of these shortcomings, the Wink software worked well with the devices it did support. Each can be scheduled to be adjusted at specific times or grouped together under the Robots option to perform coordinated tasks. We quickly linked the GE light in the living room, for example, to go on whenever the Dropcam detected motion out the front window. If you have a compatible lock, Wink enables you to coordinate other smarthome stunts, such as turning on the lights and shutting off your security cameras as you approach the house.

Wink shows a lot of promise. The company says it will work with Android Wear and plans to introduce a standalone home controller, the $300 Wink Relay, before the holidays. Depending on how quickly it can add support for more devices, it may gain more traction.

On the other hand, it took Logitech years to build up a useful database of products to work with its universal remote control. And there is a lot of competition in the DIY smart home market. Lowe’s has its Iris Smart Home system; there’s the SmartThings hub (now owned by Samsung), and companies such as Logitech and Belkin also have competing systems already on the market. Furthermore, there’s the dual spectres of Google and Apple lurking in the wings hoping to wrest control of the Interent of Things. We’d like to see as much competition as possible, so we’re hoping Wink and other can build out support quickly.