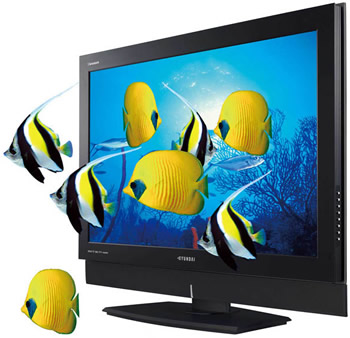 CES is here and one of the most interesting technologies to be seen at the show this year will be 3D-ready TVs and other gear. The home theater market is set to boom with a glut of new 3D devices coming soon that will usher 3D movies and broadcast programming into homes.

DisplaySearch has released its latest statistics that forecasts the revenue from 3D-ready displays to reach a staggering $22 billion by 2018. 3D-ready TV shipments are predicted to hit 64 million units in the same time frame. In 2008, the market for 3D stereoscopic displays was 700,000 units and the revenue for the market was only $902 million. The predicted growth shows a compound annual growth rate of 38% for revenue and 75% for units shipped.

DisplaySearch breaks the numbers down by product group as well. The research firm predicts that 3D-ready monitors will grow from 40,000 units shipped in 2009 to 10 million units shipped in 2018. 3D notebooks will also grow significantly from 66,000 units in 2009 to 17.7 million in 2018. It’s hard to imagine 3D on mobile phones today, but DisplaySearch predicts that 71 million mobile phones with 3D capability will ship by 2018. If the prediction comes true, mobile phones will be the largest category in the 3D market.

The huge number of 3D mobile phone shipments will make the 1 to 4+ inch screen size the largest market with the second largest screen size group ranging from 40-49″ for TVs. LCD technology will be the predominant technology used in 3D screens and eyewear is predicted to be needed in most applications. Over 7,000 new 3D cinema screens are expected to be installed in 2010 and an additional 9,000 screens will be installed in 2011. DisplaySearch predicted late in December that the LCD TV market would return to growth in 2010 mainly on the back of new technologies like 3D.

“3D displays are taking off with consumers due to increasing availability of 3D content. In addition, 3D standardization has also been addressed or is being evaluated in several 3D organizations,” noted Jennifer Colegrove, Director of Display Technologies at DisplaySearch. “A number of manufacturers of consumer electronics devices, including TVs, monitors, notebooks, Blu-ray disc players, and digital cameras/camcorders/photo frames have aggressively promoted 3D in the home. In addition to consumer use of 3D displays, the technology has also been used for many professional applications and advertisement/public displays.”

One key ingredient needed for 3D TVs to penetrate the market is 3D programming. 3D Blu-ray is one of the big technologies being displayed at CES later this week. The satellite that DirecTV recently launched will also have a dedicated channel that broadcasts in 3D. In addition to a single 3D channel, the satellite will also enable over 200 national HD channels to be broadcast to the entire country including Alaska and Hawaii. Some of the new HD channels will broadcast in full 1080p resolution as well. DirecTV has no plans for additional satellites at this time.

The sound of science: Why audio is the next frontier in Mars exploration