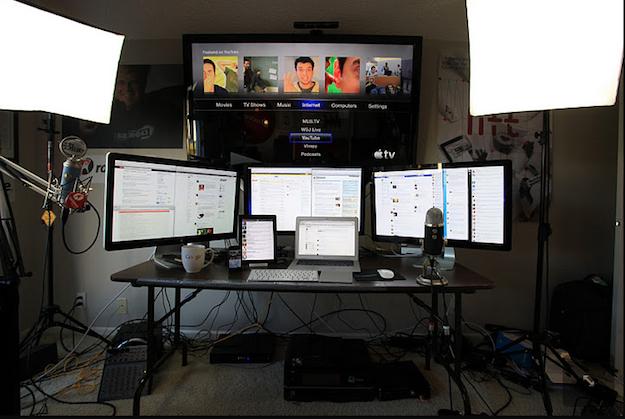 If you’re not familiar with the name, Robert Scoble works as Startup Liason for Rackspace, but he could also be called a “tech evangelist,” singing the praises of everything from Google+ to the very cool cameras he uses to shoot his videos.

His Google+ profile says he “searches for world-changing technology,” but how does one go about staying fully informed of all that’s happening on the Internet? You get yourself an extensive line-up of some super cool tech, that’s how.

Posting on Google+ just before Christmas, Scoble shared a picture of his setup, along with a list of all the services that run on them. It’s a fascinating glimpse into the world of someone who not only needs an almost constant feed of information, but absolutely loves using the startups and tech he covers to find it.

The image is dominated by three huge monitors, all run by an iMac, plus a 65-inch Vizio television fed by an Apple TV looming over the top, that’s also hooked up to Comcast and an Xbox 360. On the desk sits a MacBook Air, an iPad and an iPhone.

The prime services running on all these screens are social networks, starting with the Q&A-based Quora and continuing with Y Combinator’s Hacker News site, his beloved Google+ and also Facebook and Twitter. Tech news service Techmeme, Gmail and the Salesforce Chatter site complete those at the front, while Skype and Spotify are hidden away.

Scoble’s iPad shows the Twitter client StreamBoard, while the iPhone displays Teleportd, a search engine for photo sharing sites. Finally, it’s the startup community AngelList on the MacBook Air. If all that wasn’t enough, there’s even a Google Chromebook and a Toshiba tablet off-screen too.

If you’ve ever wonder how he, or anyone else so engrossed in emerging tech, stays up-to-date, here’s your answer – a hard-working pro setup with just a hint of Warlock’s “Command Center” from Die Hard 4.

How far away are we from mainstream 5G home internet?
This tech was science fiction 20 years ago. Now it’s reality
Digital Trends Top Tech of CES 2021 Awards
The best tech gifts under $25
Three things the Microsoft Surface Duo 2 needs to succeed
Why are so few people actually using 5G in the U.S.? Here’s what the experts say
5G-enabled billboard in Times Square briefly brings interactive game to masses
Sustainable with Google 2021: Nest Renew, traffic light efficiency, and more
The 20 most outrageous and fantastic James Bond gadgets of all time
AirPods 3 could finally debut at Apple’s Unleashed event on October 18
Scientists think the next big solar storm could create an ‘internet apocalypse’
Need a last-minute Halloween costume? Check out these 3D-printable getups
Siduri Wines blends wine and tech in the ultimate sweepstakes experience