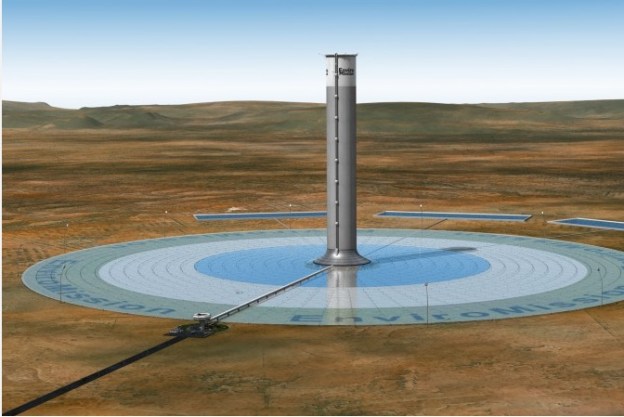 An Australian company named EnviroMission is launching a renewable energy project in Arizona that will take advantage of the state’s abundant solar resources. By 2015, the company plans to erect a massive solar updraft tower, roughly 2625 feet tall, which will be able to put out about 200 megawatts.

EnviroMission’s first full-scale solar updraft tower will soon be underway as the company is in the process of land acquisition and site-specific engineering according to Gizmag. The desert land they will be using is in Arizona’s La Paz county. The company originally planned to build in their home country of Australia, but eventually decided to go with the United States because of the number of available renewable-energy incentives in place.

Solar updraft towers combine three technologies to produce power: the greenhouse effect, the chimney effect and wind turbine. Sunshine heats the canopy at the base of the tall chimney causing air to flow upwards towards the turbines at the base which then convert that flow into electricity. The solar tower requires low maintenance, no feed stock (uranium, coal etc.) and emits no pollution.

The tower isn’t the first of its kind in the world, but it may be the tallest. At 2625 feet, the tower will be two and a half times the size of the Empire State building and is close to the height of the world’s tallest building Burj Khalifa. EnviroMission believes the tower will generate a peak of 200 megawatts, which is enough to power around 150,000 US homes. The tower is projected to run at an efficiency of 60% with no maintenance until it hits 80 years old.

The project cost will be $750 million, but the company projects that the purchase price will be repaid in 11 years. The Southern California Public Power Authority has already signed a 30-year agreement with the Australian company to purchase power.

Lithium-ion is just the beginning. Here’s a peek at the future of batteries

InSight’s solar panels get a spring cleaning from Martian winds