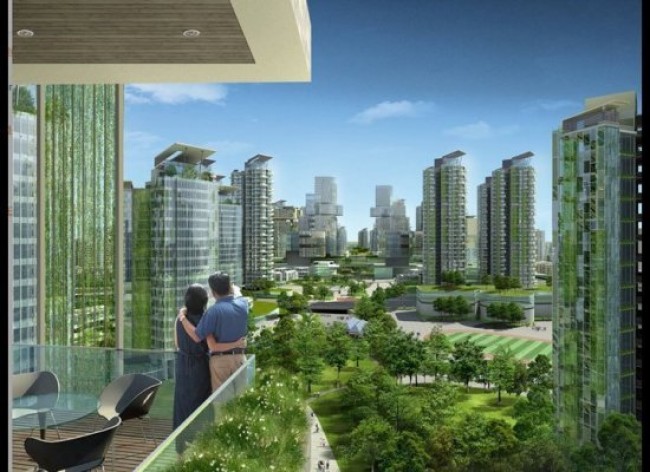 The concept of a city has always been limited to the practicalities of expansion and growth. If a city is well located, it will grow, if not, it will struggle. That idea has always seemed self-evident. Urban planners may have designed clever ways for the city to expand and grow beyond its obvious means, but at its heart, the idea of a city has always been simple–it is like a virus, and its primary goal has always been to grow and consume, consume and replicate outwards. That may have just changed with Tianjin, the world’s first complete eco-city.

Going green has become more than a buzz word in our cities. It is more than a trend, it is becoming a necessary reaction to centuries–even millennia–of unchecked development as well as the consequences of the way we live our lives.  As resources become more scarce, the sprawl of humanity continues to roll over the dwindling recesses of nature still left undamaged by the weight of our own civilizations. As long as the current rate of birth remains steady, nature will continue to feel the brunt of that expansion–it is sadly unavoidable as things stand today.

But a company called Surbana Urban Planning Group has a plan that will strike a balance between urban development and nature, and is hoping to develop a not just a new city, but a new type of city altogether. It could even lead to a new way of thinking about what a city is.  The group has been retained by the Chinese government to help build an eco-city in Tianjin, China, a megacity on the northeastern coast of the country. If the eco-city can deliver on what it is promising, it will become a self-sustained metro area that could be a glimpse at what the future of all urban expansion will be.

Using solar and wind power, rainwater recycling, and treatments of both wastewater and sea water, the eco-city would power itself naturally by using sources of energy that are far less harmful to the environment than most current forms of energy production, and they would be both renewable and inexhaustible. The Chinese government is also committed to reducing the carbon emissions of the city in the way it moves, not just in the way it emits byproducts. Part of that cut in emissions will be due to the heavy emphasis being placed on public transportation. As such, the Chinese government has committed itself to building enough public transportation that 90-percent of all traffic will be on public transport.

Another key factor in the development is the emphasis on vertical space.  Rather than simply adding new skyscrapers, each building will be connected to the city through bridges linking the structures together, high speed trains, and underground walk ways. The city will resemble a multi-layered honeycomb, with areas designed specifically to function on multiple vertical levels.

The town will be split into several distinct sections, including the Lifescape, Eco-Valley, Solarscape, Urbanscape, Windscape and Eco-Corridors all spreading over a 30 kilometers near a lake, in an area that is currently a village suburb of Tianjin.

Each district will have its own specialties: the Windscape corridor will be the hub for a light rail system as well as an area of public parks, the Eco-Valley will be an 11-kilometer long transit corridor, while the Earthscape would be a primarily residential area that utilizes as much public “green space” as possible. The Solarscape, located on the water, is designed as the primary administrative and civic center and would contain several areas for people to gather, including a massive floating stage. The Lifescape will be an area of soil and natural growth, specifically designed to offset the larger buildings in the other districts.

The Urbanscape would be the downtown and act as the core of the city, with skyscrapers and high rises supporting business and residences. Vertical layers of residential blocks would be connected by a network of “sky bridges”. From the Urbanscape the rest of the city would spill out, making it the heart of the new eco-city.

When completed, the new section of Tianjin is expected to house 350,000 people and could be the new model for cities that are expanding beyond the natural limits of their geography, as well as those that are becoming dangerously polluted due to the sheer volume of people. Tianjin is home to nearly 12.3 million people, and to put that in perspective, that ranks as only the sixth largest city in China (although it is fifth in terms of urban area).

The eco-city is being designed by the Surbana Urban Planning Group, a government owned firm headquartered in Singapore with offices in China, India, Brunei, Malaysia, Qatar, United Arab Emirates and Vietnam. The group has won several awards for its work in Southeast Asia, especially Singapore, where the physical geography of the land severely limits the growth that the city of 4.5 million is experiencing. Using Singapore as a laboratory of sorts, Surbana has become one of the premiere design firms when it comes to planning for sustainability.

The eco-city is for more than just pride and experimentation. As China specifically, and the rest of the world in general, continue to expand their cities, the energy required to power those cities is also jumping exponentially. The move to the eco-design is not just one that appeals to the naturalists worried about the degradation of the planet, but to pragmatists that recognize the necessity to change the way structures are being built if for no other reason than because of increasing costs of things like oil.

Most new construction projects are putting a heavy emphasis on making the buildings they are creating more eco-friendly, primarily because it is more efficient. But those types of construction are simply better versions of the existing structures, while the buildings in the eco-city would be part of helping the city to function. Each building would contribute something back to the city, whether it be solar energy on rooftop panels, or supporting oxygen rich vines, the city reacts like a singular organism.

While the Tianjin project goes far beyond the current standards for what we consider a sustainable building, the concept is intriguing to many, and success in Tianjin could change the way urban areas develop around the world. By specifically constructing a city that could be self-sustaining, it eases the need for resources of course, but the new city will also be able to fully utilize the modern ways to of constructing buildings that are more sustainable. And rather than having an area with a few buildings that are sustainable as most cities today have, the eco-city would feature nothing but energy smart buildings. That will make the heating in every building more efficient, as well as the air circulation, plus the building will channel the energy it needs more effectively. The end result is that the buildings will use less energy and put off less pollution.

The Tianjin eco-city is now beginning the early stages of construction, and plans to be completed by 2020.

Roving surveillance bots are coming to our cities. Luckily, they’re here to help
NFTs have a climate problem, and the solution isn’t coming fast enough
World’s Fair 2.0: The mission to resurrect the greatest tech expo of all time
Evolving, self-replicating robots are here — but don’t worry about an uprising
Three things the Microsoft Surface Duo 2 needs to succeed
Why are so few people actually using 5G in the U.S.? Here’s what the experts say
5G-enabled billboard in Times Square briefly brings interactive game to masses
Sustainable with Google 2021: Nest Renew, traffic light efficiency, and more
The 20 most outrageous and fantastic James Bond gadgets of all time
AirPods 3 could finally debut at Apple’s Unleashed event on October 18
Scientists think the next big solar storm could create an ‘internet apocalypse’
Need a last-minute Halloween costume? Check out these 3D-printable getups
Siduri Wines blends wine and tech in the ultimate sweepstakes experience