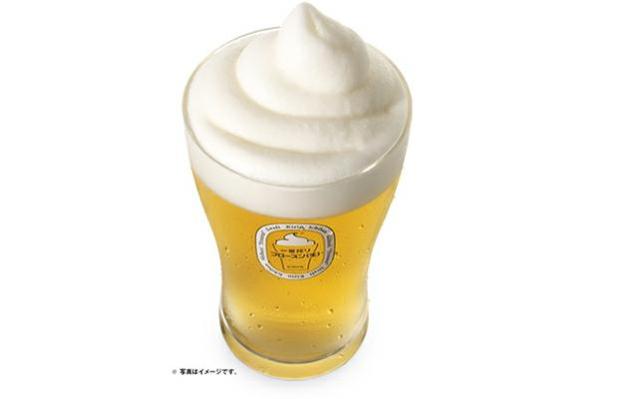 When the notoriously hot and sticky Japanese summer kicks in, many in the country reach for a cold beer and the air conditioner’s on switch. However, with all 54 of the country’s nuclear plants currently offline following last year’s disaster at the Fukushima facility, parts of the nation are facing the prospect of intermittent power outages in the coming months — which could well lead to summer days steamier than a Swedish sauna.

Thank goodness then for Japanese brewing giant Kirin. The famous beer maker has recently come up with a lager lover’s dream machine, capable of producing a frozen froth designed to keep your beer colder for longer.

The company adapted a frozen yogurt machine to produce the icy froth, which incidentally is made of 100 percent beer, so it won’t water down your drink once it melts.

The idea for frozen froth came as Kirin was looking for ways to get Japanese drinkers back on beer — especially ones in their 20s and 30s — with many having turned to wine and cocktails in recent years.

With summer just beginning and the days growing steadily warmer, beer drinkers in Japan will be pleased to know that more than a thousand frozen froth machines are now up and running at bars and restaurants across the country. Kirin has a map on its website showing exactly where to head if you fancy a freezing cold tipple.

Kirin spokesperson Kunihiko Kadota told Reuters that if the icy drinks prove popular, the machines could also find themselves at drinking establishments in the US and Europe before too long.

A giant new solar farm in Texas will harness the sun’s rays to … brew beer?

This iceless cooler looks like a Mars rover, keeps beer cold for a week