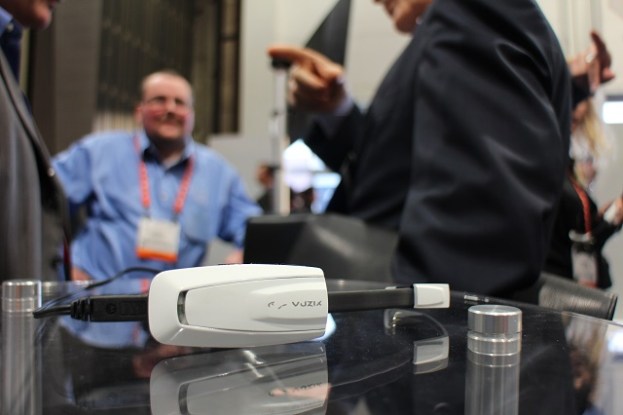 When Google first premiered Project Glass last year, it inarguably struck a chord. The augmented reality device is but-yet a prototype, only making it into the hands of developers and a handful of elite “beta testers” (looking at you, Diane Von Furstenburg and co.).

Despite the impossible-to-kill hype around this project, Google has more or less been the only pioneer seriously attacking the wearable interface market – or at least the loudest. But there are other, smaller, quieter cotenders in the space. At CES, a company called Vuzix had its M100 smartglasses on display… sort of. The unit that Vuzix is showing off is a non-working prototype. When wearing the M100s, your right eye sees a homescreen of apps that you would select actions from. But that’s all we were able to do with the device.

The unit itself is incredibly light-weight, in fact they’re a little flimsy feeling. The viewable display is surprisingly clear, however. But it’s hard to determine how well Vuzix works given the fact they are little more than a prop right now. Actually, it’s not just hard: It’s impossible.

Still, given the fact that we haven’t had a chance to go hands-on with Google Glasses, this is the next best thing. Apparently, being the next best thing is sort of what Vuzix is banking on. The platform is, more or less, planning to piggyback on Google Glasses. They will run Android, and a rep tells me that apps built for the Android market – and by extension, augmented reality apps developers are working on for Project Glass – will work on the M100s.

Basically, the smartglasses will be like a second, wearable screen for your smartphone. You can wear the unit and stare straight ahead into the display and operate your Android phone after connecting them via Bluetooth. The augmented reality part only comes in if you’re using specifically designed augmented reality apps – so those dreams you have of wearing these glasses and reaching out in front of you, touching thin air, interacting with apps? That’s only going to happen once developers create programs that support this type of function. Luckily, Project Glass has invited, encouraged, and inspired a whole ecosystem to do just that.

Vuzix plans to capitalize on this. And why not? Let a brand like Google, with deep pockets, infinite resources, and no shortage of name recognition do the heavy lifting of starting a consumer market around wearable interfaces. It’s going to be the bargain smartphone of the augmented reality accessory industry. Vuzix is shooting straight for the middle.

Which, really, might not be such a bad business plan. If wearable computing devices and augmented reality take off like more and more analysts are predicting they will, then there’s going to be a whole industry around these devices. People will want options, and different price points. Apple isn’t the only one making smartphones, after all: While the iPhone has an inarguable grip on the market, it’s not like Samsung and Nokia aren’t making money.

A rep tells us that the M100s will be available in the second half of the year and will cost less than $500.