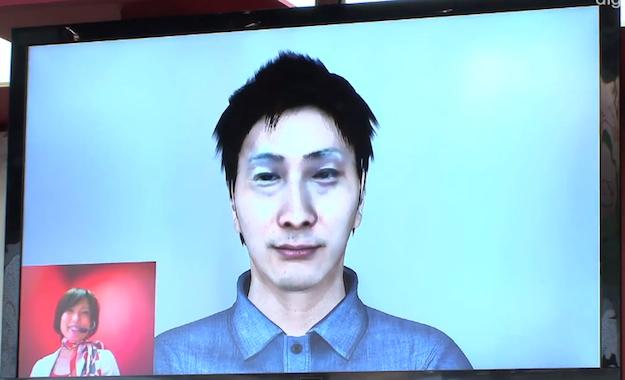 Japanese mobile network NTT Docomo has given the world a preview of what it thinks is the future of video calling, which instead of being conducted by holding a device in front of your face, will be made while wearing a headset that works like Google’s Project Glass, only in reverse.

The handsfree video phone has a total of six fisheye cameras built into the frames, providing a 180-degree field of view, plus another around the back of your head. They shoot real-time, 720p video that’s beamed to whoever you’re calling. Clever software stitches together the images to accurately show your facial expressions during the conversation, something which has the unfortunate side-effect of adding a disconcerting android-like sheen to your face.

Rather than rely on one camera like video calls made today, NTT Docomo’s video phone combines both real footage with a computer generated, 3D model of your head.

The reason for this is down to the camera’s limited resolution, but according to the promo video you can see below, if the camera resolution is increased to either 4K or 8K, more actual camera footage will be able to be used.

If you’re wondering why it also needs another camera on the back of the headset, it’s for filming the background, which helps to make the call more immersive.

A camera hasn’t been added for capturing the movement of your mouth yet, but the software listens to your voice and tries to recreate it the best it can. Finally, a six-axis motion sensor tracks the movement of your head, so the final result is as life-like as possible, despite it being built around a CG image.

At the moment, the video phone only sends images and doesn’t have a display to show the person you’re calling, but this is being worked on for a future prototype. Of course, the early version we’re seeing here is gigantic, and we’d expect the size to be reduced dramatically before it ever goes on sale too.