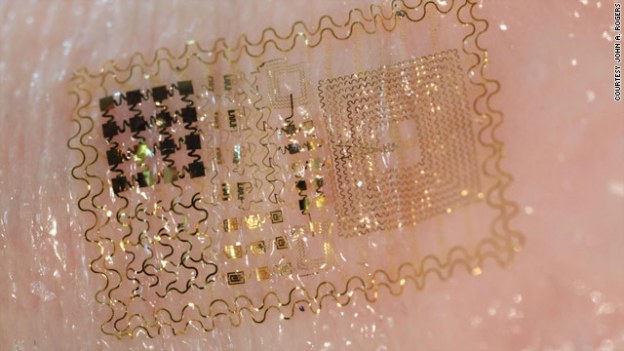 The idea of a tattoo saving your life may at first sound rather fanciful. But it could happen.

We’re not talking about the I love Mom variety found on hairy and not-so-hairy forearms up and down the country. The life-saving variety are better described as “rub-on electronics.”

A New Scientist report on Thursday describes how the current methods for monitoring patients’ health once they leave hospital following treatment are often rather cumbersome. Current technology is mostly too bulky for the patient to carry around with them, but “rub-on electronics that stick to the skin like a temporary tattoo could revolutionise medical monitoring,” the report says.

You might be familiar with sticky gel and electrodes attached to machinery used to monitor things such as heart and brain activity. But as John Rogers of the University of Illinois explains, this method isn’t convenient for all situations.

“These are useful in some clinical settings, but in the real world they restrain movement and cause irritation to the skin,” he says.

So Rogers and his team have come up with what is being called “epidermal electronics.”

The New Scientist explains: “They took the silicon and gallium arsenide typically used to build transistors, diodes and resistors, and fashioned it into wires just a few nanometres thick, each bent into the shape of a tiny meandering river. The meanders can stretch and contract to give electronics constructed from them a degree of flexibility which matches that of skin.”

Finally they put the circuits constructed from the wires onto a thin piece of rubber and embedded it inside a protective sheet of plastic. The resulting patch has a thickness of just 0.04mm.

The patch is then put on the skin by simply rubbing it with a wet finger, just as you would with a temporary tattoo.

The patches are already able to monitor the heart, various other muscles and brain activity. According to Ali Javey of the University of California, the patches are “a beautiful example of the novel applications than can be enabled by building electronic systems on non-conventional substrates,” adding: “This is truly exciting work.”

Digital Trends Tech For Change CES 2021 Awards
Neuroscience’s superstar explains how A.I. is weak, why we dream, and more
Brainwave-reading temporary tattoos could take wearable tech to the next level
Can chloroquine cure coronavirus? Here’s what science says
The best light therapy lamps
CES 2022: The biggest news and announcements so far
Taco Bell’s Xbox Game Pass-style pass will put a taco in your belly daily for $10 a month
The weirdest tech we spotted at CES 2022
K-pop NFTs are here, but I’m not convinced they’re worth it
Solving VR’s ‘infinite walking’ problem with moon boots
Fighting football injuries with 3D-printed, hyper-personalized pads
Inside the U.K. lab that connects brains to quantum computers
ClipDart is an on-demand barber app aimed at people of color