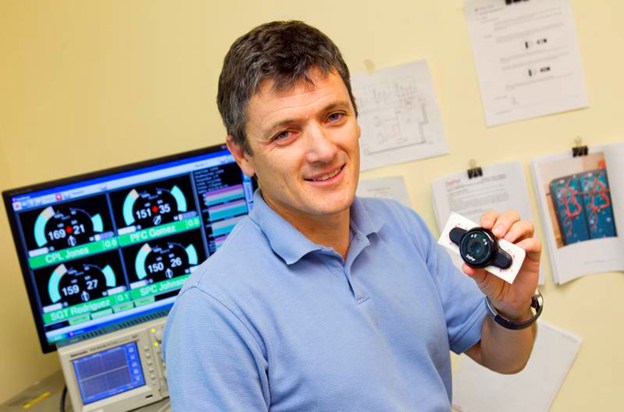 Most of the recent news surrounding wearable technology has focused on offerings from major sports brands like Nike and Under Armour or novel applications of mobile tech like Jawbone or Fitbit. But the underlying concepts and executions have been at play in the medical industry for a while now, and behind-the-scenes players like Zephyr Technologies have been working both ends of the spectrum. Zephyr’s partnerships include Under Armour (they provided much of what became the E39 compression shirt and the new Armour 39 strap) and the US military, who work with them to devise real-time medical monitoring of soldiers in battle.

We caught up with Zephyr CEO Brian Russell to talk about the evolution of his industry, what consumers should be looking for, and how Apple’s rumored iWatch could shake things up.

Zephyr has taken a deliberate open-source position as a sensor company that supports all developers and applications – why have you done that rather than launch your own proprietary offering like Nike, Jawbone, or FitBit?

[We] would love to see the killer app that teaches people more specifically about themselves.

We thought a lot about this when we started Zephyr and realized that the industry is way too early in its lifecycle to begin locking down its earliest applications. There’s a massive amount of creativity out there on the development side, and there’s huge churn in popular preferences, so we took the position that we wanted to support and accelerate innovation rather than try to predict and control it.

The companies that you mention that are launching proprietary applications tend to emphasize what’s unique about their product, their metrics – anything really, that lets them translate the data into a trademarked offering. They’re more in the edu-tainment space than the true “quantified self” zone. You get information or points or scores, and you can upload and share them socially and all the rest, but there’s very little that’s actually customized to your own unique physiology.

We get why they’re doing that, but would love to see the killer app that teaches people more specifically about themselves. Until then, we’re just trying to develop the best hardware and let everyone find the uses that stick.

There are so many options and varieties of “wearable tech” crowding the market today. What advice would you offer consumers on how to choose what’s right for them?

You’re basically assessing all of these offerings on two competing axes: wearability and accuracy. The less intrusive a device is, the longer I’m likely to wear it, but generally, the smaller the battery, the less regular the data transmission and the fewer numbers of sensors capturing what’s really going on for me. The more accurate an instrument is, the more it interrupts my typical movement patterns and the less likely I am to wear it all the time.

At one extreme is the FitBit, which is as simple as putting it in your pocket and getting on with your day. But in this case, the device is mostly novelty with a foundation of sensing technology as the hook. On the other extreme, think of an fMRI machine; it’s amazingly accurate, but crazy expensive, and completely disruptive to anything other than the act of getting measured.

To go a level deeper into wearability, you’ll want to figure out which mode works best for you. We’ve seen three basic applications take the lead with different user populations. Patches are very popular in healthcare, especially in patient care where the users aren’t fully resourced to manage the device themselves. Compression shirts, like the Under Armour E39, are big with athletes who want to balance very dynamic movements and still keep sensors tracking. And lastly, chest straps, like conventional heart rate monitors, are a typical choice for the fitness community. A challenge for the watch and smartphone sensors is that they are so far from our center of mass that they don’t give us accurate readings on what our whole body is actually experiencing.

You’ve tested and developed Zephyr’s products in close coordination with not only elite athletes, but also the military’s special forces. What’s been the most surprising thing you’ve learned from tracking and measuring the best of the best?

I’d say the biggest insight, and this came from working with the special operations teams – who are basically guys in their forties with the physical and mental conditioning of Olympic and NFL athletes, with all the bangs and scrapes you’d expect, plus battle wounds – was how they could turn their “flow,” or peak performance state, on and off on a dime.

When they’d be in combat simulations, busting into rooms, sweeping and clearing buildings, distinguishing between hostiles and hostages in a blink, their physiology would drop into that zone. They’re heart rates would equalize and become strongly coherent, their respiration would level out, and their psychology – their hot decision making – would become amazingly accurate. And all in conditions that would have most of us shaking in the corner!

What they’ve done is train a level of higher-order decision-making that goes far beyond simple muscle memory; they are “playing to win” in conditions that drive everyone else to simply play not to lose.

There’s been a ton of buzz lately about Apple entering the wearable tech market with some sort of “iWatch.” Assuming the reports are correct, what do you think it’ll look like? what should we expect from Cupertino? Are these guys going to be the Nike Fuel killers?

Well, first off, Nike and Apple share directors and collaborate pretty closely, so I’d be surprised if they take a straight shot at the Fuel franchise. Apple’s one of the best at following this mantra, “features are inversely proportional to value.” The iPod was in no way the most complicated MP3 player; it thrived as much because of what it left out. So I’d expect them to come up with a very clean, user-centric design.

Stanford’s Medical School has done a comprehensive 5-year study on fitness algorithms. You need a minimum of three metrics to precisely measure what’s really going on in a given subject; accelerometry, heart rate, and respiration. Apple’s got the three axis accelerometers in their devices already, along with optical sensors like the iPhone camera that can approximate heart rate and heart rate variability, so respiration measures and maybe even galvanic skin response would round that out pretty well.

I don’t know whether they’ll create an “Apple Number” like Nike’s Fuel points or Under Armour’s Willpower. Beyond Nike, Apple’s already getting beaten around by Samsung who’ve got an FDA approved phone, and sensing tablets that are getting strong penetration in the medical market. If I were them, I’d be focusing on the 15,000 Baby Boomers who are turning 65 each day and finding a way to keep them moving for even 20 minutes a day. If they could get folks to look after themselves between the ages of 55-65, so they could live well until 75-85? I’d say that would be an achievement that could outstrip the iPhone in scope and dollar impact.