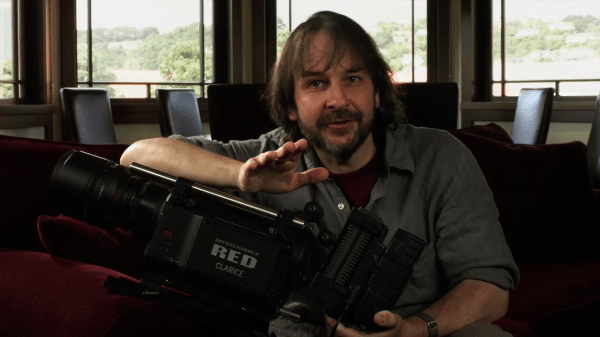 Peter Jackson has been giving us glimpses into the production of The Hobbit, including behind the scenes images and interactions with the cast. That’s enough to get even the mildest LOTR fan excited, but cross that insider info with some background on the innovative technology behind the making of, and you’ve hooked us.

In a new video blog (which you can check out below), Peter Jackson says he would have used 3D in the original LOTR films if he’d had the ability – and that he actually took 3D photos on set that will hopefully someday make it to Blu-ray.

“Now the reality is that it’s not that difficult to shoot in 3D. I love it when a film draws you in and you become part of the experience, and 3D helps immerse in the film.”

Before you get too critical about the over-use of 3D in current films, remember how much the LOTR trilogy relied on CGI—graphics that now border on outdated, but at the time were breathtaking. Given the saga’s determination to top-notch visuals and Jackson’s commitment to the end product, we don’t expect cheesy 3D graphics for the sake of cheesy 3D graphics.

It’s possibly one of the first films in which even the concept art has been drawn in 3D. The artists responsible for these images have been rendering them separately in blue and red tones and viewing them via the classic red-blue 3D glasses. It helps unify the vision and ensure the final product is breathtaking.

Earlier this year, Jackson announced that The Hobbit would shoot at 48 fps. That’s twice the normal rate of film and nearing how many frames the human eye can consumer in a second (60). “It’s a natural progression toward giving the viewer what they would actually see in the natural world,” says Gareth Daley, 3D camera supervisor on the film.

Earlier this year, Jackson explained this would enhance the overall look of the film. “The result looks like normal speed, but the image has hugely enhanced clarity and smoothness. Looking at 24 frames every second may seem ok – and we’ve all seen thousands of films like this over the last 90 years – but there is often quite a lot of blur in each frame, during fast movements, and if the camera is moving around quickly, the image can judder or ‘strobe.’” Check out this example to get an idea of the difference we’ll be seeing in The Hobbit.

This means that makeup and lighting artists must engineer everything so that it shows up realistically on camera. It’s a new challenge for the team to keep things looking detailed yet authentic—a serious undertaking considering the LOTR fandom.

Bilbo might be the star of the film, but behind-the-scenes, all credit goes to the Red Epic cameras. It has 5K resolution , a 27 layer ASIC processor, and can shoot up to 120 fps at full 14-megapixel resolution—in a relatively discreet package.

Jackson has a special spot in his heart for the Red lineup. “I have always liked the look of Red footage. I’m not a scientist or mathematician, but the image Red produces has a much more filmic feel than most of the other digital formats. I find the picture quality appealing and attractive, and with the Epic, [the team] have gone even further. It is a fantastic tool, the EPIC not only has cutting edge technology, incredible resolution and visual quality, but it is also a very practical tool for film makers.”

He must be a fan: The Hobbit set is using 48 Red Epic cameras, all with their own monikers (ranging from Fergus to Tricky Woo).

The Hobbit will be one of the first film’s to shoot with the Red Epic, although the Red One has made the rounds: The Social Network and Pirates of the Caribbean: On Stranger Tides are just two such examples.

Assistive tech is progressing faster than ever, and these 7 devices prove it